Dawson and his dog Tagg during a test run. Image: PaddlingDown

Insomnia affects a large population of people across the world. It can lead to an increased risk of heart disease, hallucinations, and an overall lesser quality of life. One Colorado man by the name of Tomas Dawson is hoping to cure his chronic insomnia and raise awareness by paddling 2,341 miles down the Missouri River. He hopes to reset his circadian rhythms by waking with the sun and sleeping with the dark, as humans have done for thousands of years, without the influence and distractions of modern life.

The idea was planted in Dawson’s mind when his wife asked where the headwaters of the Missouri River were while completing a crossword puzzle. Wondering if he would be able to paddle the full length of the Missouri River, the research began. He discovered that the river is a popular destination for long distance paddlers, and 3 to 8 people complete the journey each year. Some even follow the path of explorers Lewis and Clark, paddling against the current from St. Louis, Missouri to Three Forks, Montana.

Dawson began the preparations for his trip by acquiring gear, planning resupply mail drops and camps, and training with TRX equipment to strengthen his core, shoulders, and arms for the months of paddling that lay ahead. He contacted “River Angels”- people that live along the river who help paddlers such as Dawson along their journeys. He weighed and checked all his gear, and then, weighed and checked it again. The biggest piece of equipment, his Eddyline Shasta Kayak, has a carrying capacity of 450 pounds. Dawson and his Border Collie Tagg, who will join him on the journey, weigh a combined 210 pounds. The remaining gear must stay below 240 pounds. A portion of Dawson’s gear is listed below. Several companies have sent him gear to test and use on the river, including a pair of AfterShokz ear buds. He will also be using the latest in lighter technology, a Tesla Plasma Lighter. 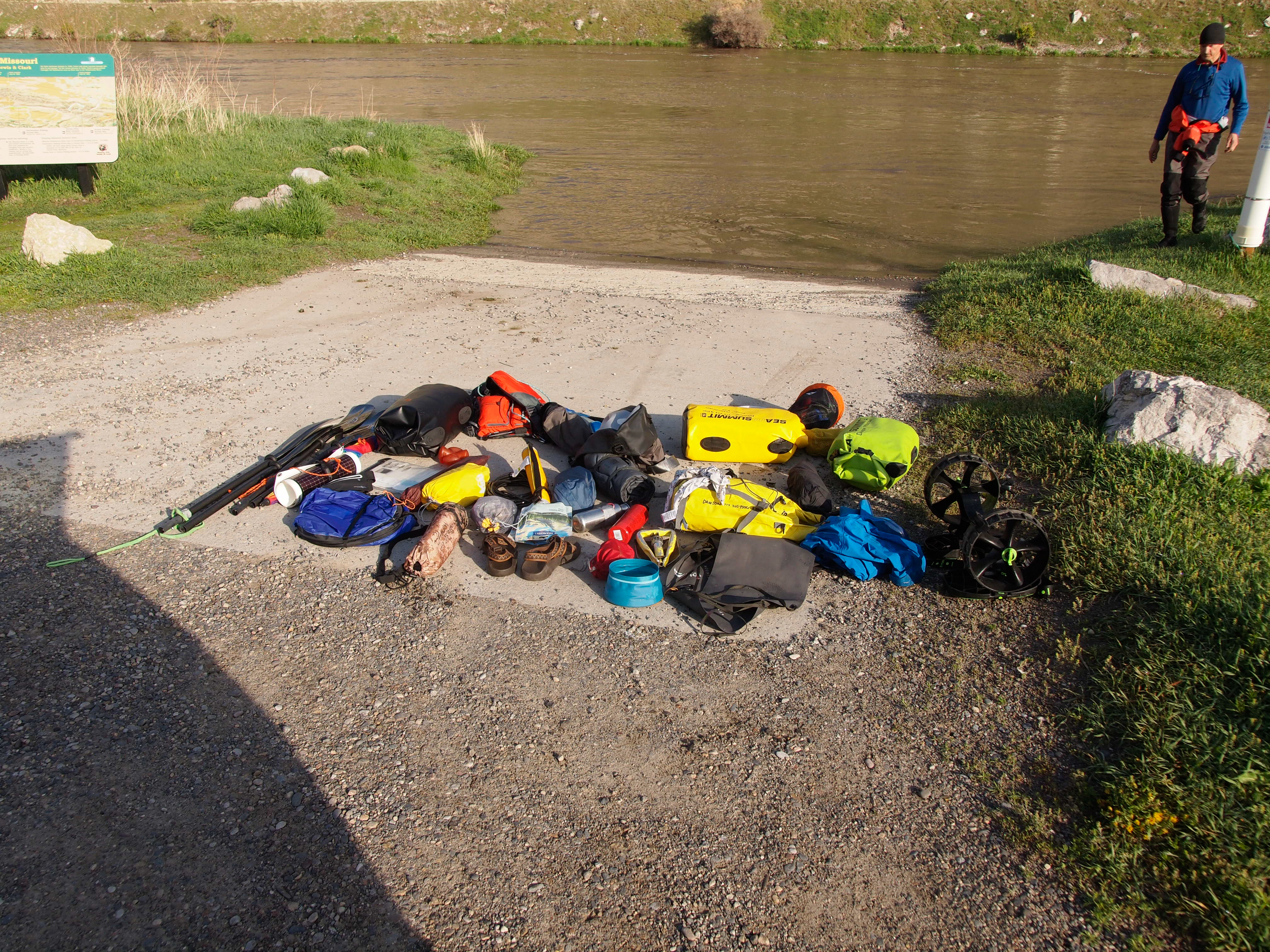 Some of the gear, much of it vacuum sealed for space conservation. Image: PaddlingDown

Dawson stated that food selection and preparation was the most complicated part of planning this expedition. He will need 3,000 to 4,000 calories per day that are easy to prepare. His meals will be made up of:

Dawson began his journey down the Missouri River on May 14, 2018 at Confluence State Park in Three Forks, Montana. He has now been on the river for just over a week and is posting updates when he can on his Facebook page, PaddlingDown.

UPDATE: Due to medical complications, Dawson will be unable to continue his trip. He hopes to embark again in a few months time.