There are always more places to visit, things to see, and cool lodges from which to ski tour. Someone once told Sharon and me that we had been to more ski touring lodges than anyone else we knew but we had never been to Hilda Hut.

We had toured in the Valkyr Range before in the southeast part of British Columbia but at the Naumulten Lodge aka Valkyr Lodge. However, we’d never checked out the other Valkyr family of lodges so when last-minute cancellations resulted in openings on a fully-guided, fully catered trip (run by Dan Morton of NWM Experience) to go to Hilda Hut in the Valkyr Range we jumped on the opportunity.

Emails, a call, and a few trip logistics later we were leaving Nelson to go to Nakusp and to get ready to ski for a week.

Staging and getting there

The Valkyr lodges are owned by Martin and Shelly Glasheen, locals to the area. You are helicoptered into the lodges and stage out of Burton, a small town just south of Nakusp in the center of southeastern area B.C. You can also drive to Burton through Vernon or via Revelstoke via paved roads.

Be aware that due to COVID staff shortages there’s not much for breakfast in Nakusp so make sure you get some food beforehand for the early morning. That morning we grabbed coffee at Nakusp, met Dan for paperwork then arrived at the Burton staging at 8:00 am. It was actually with some sense of relief that everyone assembled for departure. COVID has hit the industry hard and everyone (guests and staff) are under strict protocols to abide by mandatory provincial health regulations. All that said, everyone stuck to the safety program, and off we went to look for our helicopter at staging.

The other Valkyr huts (Naumulten and the LQ Outpost) also stage out of Burton so flights and loading are managed by Valkyr staff. As it always seems with helicopters you should be prepared to wait your turn. Change-over day was problem-free and we were all at the lodge by early noon giving us a half-day to explore.

The Lodge and terrain

Hilda Hut is at 1950m so you ski tour right out the door. All manner of treed terrain rings the hut. There are mellow practice slopes descending from and to the doorstep. There are steep treed shots and there is access to alpine at three contiguous peaks (Mt Hilda, Prough, and McBride all approximately 400 – 500m above the hut). This means you can have ski tours that loop and lap the hut and you can also have tours that roam in the alpine.

The douglas fir and cedar timbers used for the construction of Hilda Hut were logged and milled by the Glasheen family then sent up to the lodge site by helicopter.  Many hands made steady work in 2010/11 and the lodge opened for business in winter 2012.

12 guests are housed in separate two person rooms. There’s a large anteroom where ski/outdoors gear can be stashed and dried, a large lounge above, a kitchen, a well-equipped tool room, cold room, ski gear foyer, running water (although it had frozen last week during a deep cold spell), indoor toilet/shower and sauna in a separate building. Valkyr also provides a staff custodian who stocks the fireplace, preps the sauna, makes sure the micro-hydro is working, and keeps the lodge spic and span.

As mentioned Hilda has lots of variety of skiable terrain with the caveat that the terrain around this particular lodge is more biased towards advanced skiers. Although there are some gentle slopes, beginner/intermediate powder skiers may well be intimidated as offerings are primarily steeper. There are also copious amounts of powder. Our trip in early January 2021 already yielded a 1.8m snowpack at treeline with more than 3m in alpine bowls!

Backcountry skiing’s popularity has exploded in the past few years. Therefore the availability of Valkyr Lodge‘s hut-based offering is exceptionally limited. Your best option is to check in with guided offerings such as those offered by Dan via North West Mountain Experience or try to get a last-minute cancellation.

Be aware that you have to commit to dates at least a year in advance. For a benchmark price look to pay CAD $1600 – $ 1800 (US $1281 – $1441) per person for the bare bones self-guided self-catered trips but even then availability for that is three years out. More rates for Valkyr including the fully catered, fully guided trips are here (bottom of page). If you want to get on a trip contact Valkyr directly or guides like Dan at North West Mountain Experience directly.

Once you’ve booked your fiscal outlay may not be over. Consider trip cancellation insurance (useful link). Approximately 5% of the cost of your trip has you covered for any cancellation whether it be pandemic, sickness, injury, family, or personal issues. Things happen; this helps you not be out-of-pocket.

When you’re on a seven-day hut-based touring trip your job for the next week is to step out of the door and go skiing. It’s really quite that simple. If you’re self-guided, another set of tasks will include getting weather + snowpack info and making route and touring plans. If you’re self-catered then your tasks will also include planning meals and cooking.

In our opinion, catered trips are the way to go. For a few more hundred a person you hire a dedicated cook who knows how to make tasty food which sets you up for breakfast, lunch, appetizers, and dinner.

On a fully guided, fully catered trip the day will unfold as follows. Wake up at 6.30 am or thereabouts. Stumble over to the kitchen and have coffee. Have granola and yogurt and/or something light. Breakfast is served at about 7 am or shortly thereafter. Marylene always gave us the run-down on what food she served; she is a professional cook and her pride and quality of offering are remarkable.

Midway through breakfast, Dan backed up by Amelie (Dan’s fellow assistant professional guide) will then give us weather and snowpack information. Also then discussed would be the touring program offering for the day. Both Dan and Amelie were up well before us (as were the rest of the staff) and incorporate variations in the plan to account for uncertainties as well as to give less ambitious guests the ability to sit out a lap by returning to Hilda Hut or an alternative tour.

Lunch is then on the table after breakfast is concluded and we pack what we eat. With the knowledge that we’re either going to be touring high or staying low and lapping pow, we then know what and how to pack. Ready to go at about 8 am and out the door we go for the day’s adventure.

Part of the program of a guided group is making plans to accommodate different wants, needs, strengths, and desires; and to adjust to variable conditions. After a mid-week powder dump degraded into mixed precipitation and a natural cycle of avalanches, we went to the alpine. The following days brought a mix of bluebird (when we went high), then a series of mixed weather days giving us windows of momentary visibility. We adjusted and scoped out the terrain. 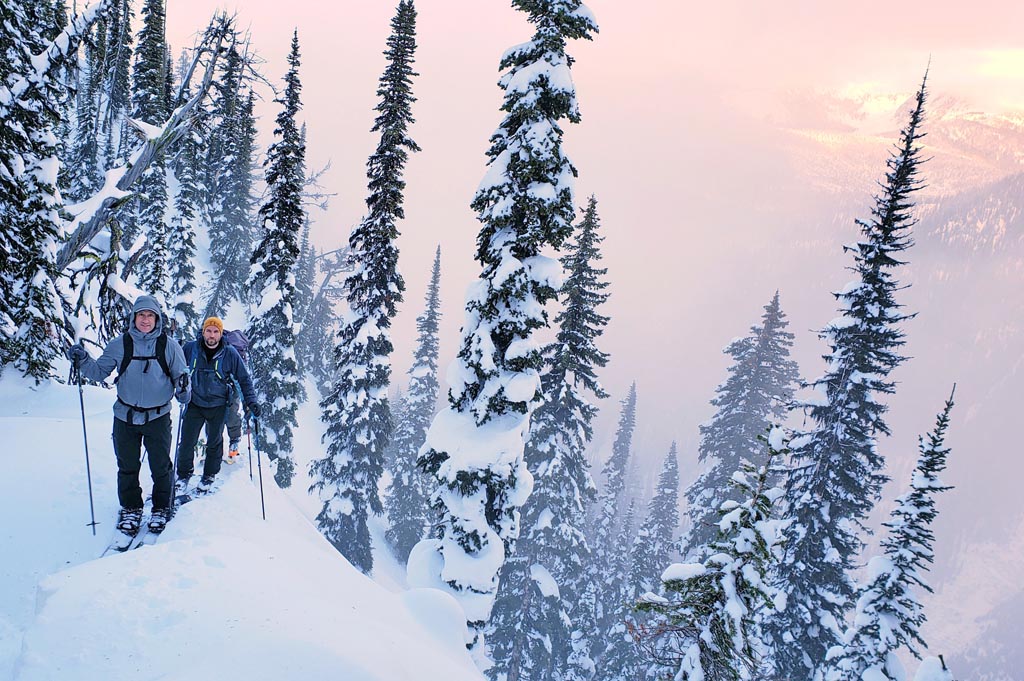 Dan and Amelie helped get us the goods, monitored conditions, and worked out programs that had people happy and safe.

Marylene is a professional chef. She had control of the kitchen and food; consistently dealing out high-end restaurant aesthetic quality in an alpine hut environment. This in copious amounts too!

Logan had the week off from school and joined us. He had sous-chef and general helper duties assisting his Mum and Dad out whenever needed. One can all should be so lucky to have such a good-natured person around a lodge