The closure of Colorado’s ski resorts, and the banning of uphill skiing within those resorts, has seen a dramatic increase in the number of people heading out into the backcountry to recreate and get their powder fix. With that increase in participants has also come an increase in human-triggered avalanches, according to the Colorado Avalanche Information Center, who have reported 34 human-triggered slides in the state since March 20th.

Wednesday a snowboarder triggered a very large avalanche on the west side of the Eisenhower Tunnel in Summit County. The avalanche released on a northwest-facing slope above treeline in a thin rocky area. This avalanche buried the loop road above the tunnel portal. The road was open at the time.

“There was a party of two backcountry tourers, one a snowboarder, that were riding above the portal and they triggered an avalanche that ran down and covered the access road with avalanche debris about 20 feet deep and about 300 feet wide,” Ethan Greene, CAIC director said.

On Tuesday a snowboarder triggered a huge 1,500-foot-long slide near Telluride. Seriously injured, it took almost 40 rescuers to extract him from the backcountry. And on Saturday, there were reports of a slide on Mount Trelease next door to Loveland Ski Area on the north side of I-70. 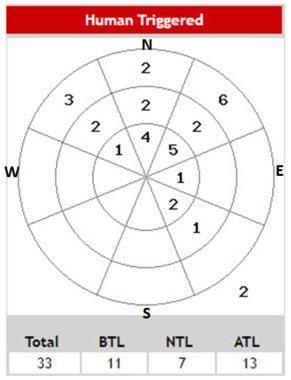 Credit: CAIC FacebookThese slides serve as an important reminder to all of us. The potential to trigger avalanches large enough to kill or injure a person is real right now. We can trigger avalanches that may do harm to other people or infrastructure.
We need to balance our risk in the backcountry while considering the consequences should we trigger a slide. Are we exposing others to risk without their consent? If I or someone in my group gets hurt or worse, what burden does this place on our already stressed search and rescue and health care systems? Let’s all enjoy the backcountry safely and keep or communities and fellow backcountry tribe members in mind when we consider our terrain choices.

Since Friday the CAIC recorded 33 avalanches triggered by backcountry riders in Colorado. Fifteen of these slides were large enough to kill you (D2 or bigger); without pushing you over a cliff or into a tree, rock, or gully. These slides released on slopes facing northwest, north, northeast, east, and southeast. Most were in the near or above treeline elevation bands. Nine were in the North San Juan zone, four were in the Vail/Summit County zone, and two were in the South San Juan zone.

Now more than ever, please get the forecast (colorado.gov/avalanche) and make a plan for your day that fits with the current conditions. Make good choices, have a great day, and come home without incident.