6 spectators were injured today when lightning struck a pine tree at the PGA Tour Championship near Atlanta, Georgia.

“There were six fans injured on site during a lightning strike. Our latest report is that their injuries do not appear to be life-threatening. Play is suspended for the day, and will resume Sunday at 8 a.m. ET.

We will provide further updates as they become available.” – PGA Tour, today at 6:00pm ET

Recorded #lightning strike at the Tour Championship at East Lake around 4:46 pm — @NBCSports reported four spectators were injured though the injuries are not life threatening. @11AliveNews is working to get more information. pic.twitter.com/6dnvdColAq

“It was like a sonic boom,” said Billy Kramer, who was one of the injured persons.

Billy was one of the tournaments food vendors and was in his cart when lightning struck the pine tree just next to the path he was driving on.

At 4:17 p.m., the third round of the TOUR Championship was suspended due to inclement weather in the area. At 4:45 p.m., there were two lightning strikes at East Lake Golf Club; a tree near the range/15 green/16 tee was hit, and debris from that strike injured four people.

EMT tended to those fans and two others immediately and transported them from the property via ambulance for further medical attention. Our latest report is that their injuries do not appear to be life-threatening.

Due to these circumstances, the third round has been suspended for the day and play will resume on Sunday at 8 a.m. ET.

The safety of our fans, players and partners is of the utmost importance. We will provide further updates as they become available.” – PGA Tour, today

According to NOAA, 51 people die from lightning in the USA every year on average.

It’s estimated that 6,000 people die each year from lightning strikes and that 240,000 people are injured by lightning each year. 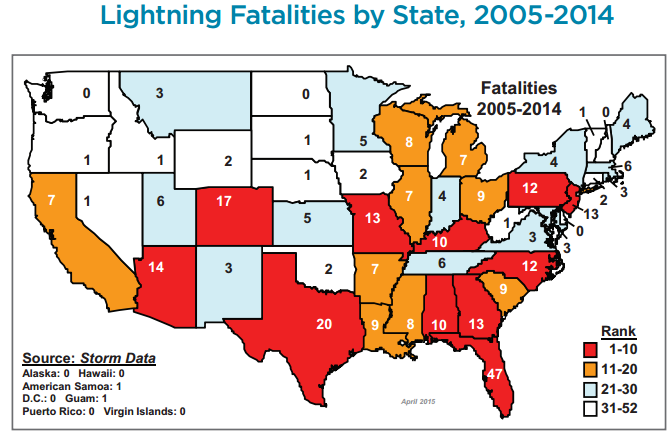 Lightning strikes can produce severe injuries, and have a mortality rate of between 10% and 30%, with up to 80% of survivors sustaining long-term injuries. These severe injuries are not usually caused by thermal burns, since the current is too brief to greatly heat up tissues; instead, nerves and muscles may be directly damaged by the high voltage producing holes in their cell membranes, a process called electroporation.

In a direct strike, the electrical currents in the flash channel pass directly through the victim. The relatively high voltage drop around poorer electrical conductors (such as a human being), causes the surrounding air to ionize and break down, and the external flashover diverts most of the main discharge current so that it passes “around” the body, reducing injury.

Metallic objects in contact with the skin may “concentrate” the lightning’s energy, given it is a better natural conductor and the preferred pathway, resulting in more serious injuries, such as burns from molten or evaporating metal. At least two cases have been reported where a strike victim wearing an iPod suffered more serious injuries as a result.

However, during a flash, the current flowing through the channel and around the body will generate large electromagnetic fields and EMPs, which may induce electrical transients (surges) within the nervous system or pacemaker of the heart, upsetting normal operations. This effect might explain cases where cardiac arrest or seizures followed a lightning strike that produced no external injuries. It may also point to the victim not being directly struck at all, but just being very close to the strike termination.

Another effect of lightning on bystanders is to their hearing. The resulting shock wave of thunder can damage the ears. Also, electrical interference to telephones or headphones may result in damaging acoustic noise.