It was only a matter of time before this happened.  When I was working as an Avalanche Forecaster, I heard that closing the Little Cottonwood Road during one of the big three day weekends costs the ski resorts (Alta and Snowbird) over a million dollars a day.  The road is controlled by artillery, which means that even a single backcountry skier can disrupt the shooting process by touring in a targeted zone, which will delay the road opening.  As such, UDOT has now instituted a top-to-bottom, wall-to-wall backcountry closure on not only ALL of Little Cottonwood Canyon, but even a kilometer beyond the ridgeline in the overshoot area while they are controlling it. This includes overnight camping, the far reaches of Hogum Fork, Red Pine Lakes, Pfiefferhorn and the Y-Couloir. You are supposed to follow UDOT on Twitter for closures and opening.  Harshtag.

The backcountry (and only the backcountry) will be closed from 8:00pm the day before until the following day when UDOT tweets all clear.  Except if they call for an interlodge, the resorts will not be affected by this closure at all. I’m also guessing that this will just be a first step in LCC backcountry closures as 36+ slide paths hit the road.  Even after being controlled by explosives, if a backcountry skier unintentionally triggers a slide which remotely threatens the road, it will be an easy excuse for UDOT to close it.  The obvious and easy choices would be Tanners, White Pine Couloir, Little Pine, Mt. Superior, Flagstaff and Emma Ridge.

Paranoid?  Perhaps, but I’ve seen it before and heard mumblings about it from people close to the subject. The photo below is a case in point where a backcountry skier unintentionally triggered an avalanche near Mt. Superior (which didn’t even hit the road) and Alta Central called it in to the Salt Lake County Sheriff, who patiently waited to issue vague citations for non existant rules violations.  Nothing came of it except for a lingering excuse to close such terrain to backcountry skiing and a new SL County closure ordinance #13.12.010.  This time you will be ticketed.

The ultimate solution to this would be to eliminate shooting 105mm howitzers in heavily populated urban areas and build avalanche-proof transportation up Little Cottonwood Canyon – an idea that was nuked early on in the Mountain Accord talks as being too favorable to Alta and Snowbird.  That may be, but the resorts certainly aren’t hurting from a backcountry closure –  they’ll still be making money and there will still be traffic jams.  The only thing that has changed is a reduction of public access to public land.

A full copy of the notice from Paul Diegel of the Utah Avalanche Center:

The Utah Department of Transportation (UDOT) is implementing a revised policy for backcountry closures in Little Cottonwood Canyon this winter to help get SR 210 open quickly and safely, keep it open, and to reduce the likelihood of backcountry travelers exposed to avalanche explosives work. UDOT has thousands of people waiting on them to reduce the avalanche hazard and safely open the road and the sighting of a single person or even evidence of a person near their artillery targets can delay opening for hours. For this reason, they will be enforcing a complete closure of all backcountry in Little Cottonwood Canyon the night before any planned avalanche mitigation work. If this revised plan does not work, more restrictive closures may be needed.

If you don’t want your early-morning mountain therapy session to be shut down, it would be wise to pay attention to UDOT activity this winter. 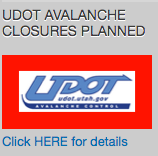 UDOT is committed to keeping the road open to provide safe canyon access to all of us. Evidence of anyone in a target area brings all avalanche explosives work to a halt. To say the military weapons used for avalanche explosives work are extremely dangerous is an understatement. One accident involving explosives and the public will likely shut down all highway avalanche explosive work in the US. Living so close to the Greatest Snow on Earth is a big part of why so many of us live here, but sometimes the weather, terrain, and number of other people creates a challenge.  Be smart and let the highway crews do their job.