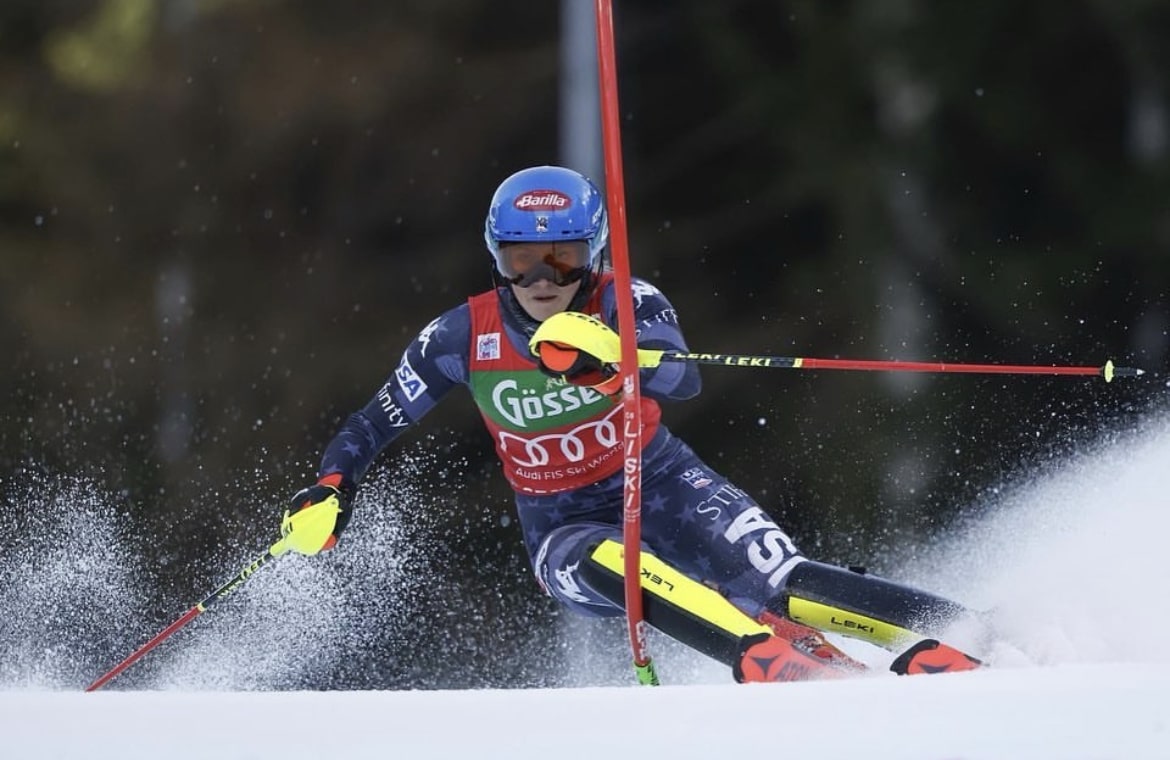 Mikaela Shiffrin repeated her incredible feat of winning all three events in Semmering, Austria, during the races from December 27-29, 2022. The Team USA skier had first managed the hat trick in 2016 in Semmering. Winning three tech events in a row had only been done by one other female skier before, Switzerland’s Vreni Schneider in 1989. Mikaela has done it twice, putting her miles ahead of the competition.

The races in Semmering consisted of two Giant-Slalom events and one Slalom race. The Slalom was the last event and is Mikaela’s strongest discipline. She was tied in Cup Standings for first place with Switzerland’s Wendy Holdener ahead of the Semmering Slalom race.

The Slalom event is made up of two runs. From the first run, only the top 30 skiers qualify for the second run. Mikaela had won the first run with a substantial 0.72-second lead in front of Sweden’s Anna Swenn Larsson and 0.79 seconds in front of teammate Paula Moltzan. Paula herself was only 0.01 ahead of 4th placed Lena Dürr from Germany.

The second run was carried out in reverse order, and all eyes were on the last six skiers. Switzerland’s Wendy Holdener was ranked an equal 1st in the Cup standings and wore, like Mikaela, the red starting bib. She had come in 6th after her first run, managed a clean second run, and went into the lead. Next up was 5th placed, multi-talented Petra Vlhova from Slovakia, who managed to bump Wendy to 2nd place by a mere 0.14 seconds. 4th placed Lena Dürr was up next and took the lead from Petra by almost half a second, an impressive lead in Slalom skiing, but was it enough for a podium? There were still three skiers left, who could all make the podium, so all eyes moved to the next skier, 3rd placed Paula Moltzan. The American delivered an exciting race and managed to eke out 0.05 seconds on Lena. Paula had a podium; that much was certain. Cheers erupted from the Team USA area, and her teammates rushed to her to congratulate Moltzan on her first-ever World Cup podium in Slalom.

Next up was Swedish skier Anna Swenn Larsson who had come in 2nd on the first run. Anna made her way down the race course but almost lost her balance in the midsection. This cost her the lead, and the Swede dropped to 5th place. Lena and Paula in the finish area were elated, knowing they both had a place on the podium as there was just one skier left. All eyes went to Mikaela in the starting gate. It almost looked effortless as Shiffrin weaved her way through the slalom poles on the Austrian race course in Semmering. She had a big lead — in racing terms — so seemingly focused on a clean run, and it paid off. Mikaela finished in 1st with a 0.29-second lead ahead of her teammate Moltzan and 0.34 seconds ahead of Germany’s Lena Dürr.

Mikaela skied straight to Paula in the finish area, tossing her poles aside. The two teammates were squealing with joy before grabbing each other in a tight embrace. “Oh my God,” Mikaela can be heard exclaiming. They knew they had managed a feat not seen since 1971: they had secured a 1-2 double US podium. The only other double podium with 1st and 2nd place going to Americans was in Heavenly in 1971, with Barbara Ann Cochran and Karen Budge winning 1st and 2nd place, respectively. Barbara is the mother of Team US race skier Ryan Cochran-Siegle.

This fantastic feat takes Mikaela to 80 World Cup victories and within reach of breaking Lindsey Vonn’s record of 82 wins, making her the best female skier of all time. It also takes her to 50 Slalom World Cup victories, the most Slalom wins by any skier, male or female. Mikaela is so far ahead in Slalom skiing at this stage, she is only breaking her own records.