When I talked to Ben 2-days ago about what he wanted to ski on Saturday and he said:

“I was thinking Suicide.”

I was thinking about it too, but wasn’t going to go for it without a bit of coercing due to the long shale rock scramble to get up to and back from it.

The snow in Suicide is just hanging in space right now…

For reference, Suicide Chute on 11,000′ Mt Superior, UT only has snow in the chute right now, with a long, rocky approach and some 3rd class rock scrambing to get into and out of it.

The current state of the chute is in is keeping most people out.

According to Andrew McLean’s “The Chuting Gallery – A Guide to Steep Skiing in the Wasatch”, Suicide Chute is 1,500-vertical-feet, 40º steep, and a 2 out of 3 star run.

Ben grabbed Kevin and we met up at the base in good spirits in funky, warm, earthquake weather yesterday.

T-shirts and board shorts with shells over them were all that was needed for this hike.

We slogged up the scree field for about 45-minutes in hiking shoes before hitting a short 3rd class rock section.

The rock scramble was pretty mellow and soon we had the choice of staying on the rock or booting up the snow in Suicide Chute.

We chose rock since the snow down low in the chute was soft, slushy, and rotten.

About halfway up the chute, the rock climbing became more critical and we threw on our ski boots and jumped into the snow.

There was an old bootpack and the booting was good.

It was nice on top with warm temps, no wind, and cloudy skies.

We ate, drank, and told stories about the WURL.

He put some energy into jumping around and breaking up the snow a bit so the skiing would be better for Kevin and I.

I went second and Ben’s work helped the skiing quite I bit, I believe.

I got bounced around and struggled in the highly textured, firm snow at the top of the chute.

I found a bit of rhythm about mid-chute as the snow softened up and smoothed out.

The lower chute was pure corn and skied great.

We all agreed that it was fun and worth it at the bottom.

It always helps when the last turns are good.

The scramble down the rocks wasn’t bad, especially for the 2 mountain goats I was accompanied by.

The shale slog down to the car wasn’t bad either due to Kevin finding little trails and our spirits being high.

Was it worth it?

I’d say yes because it’s such a cool chute to be in and the snow wasn’t nearly as bad as we’d feared.

We didn’t see any avalanche activity nor instability in Suicide Chute this day. 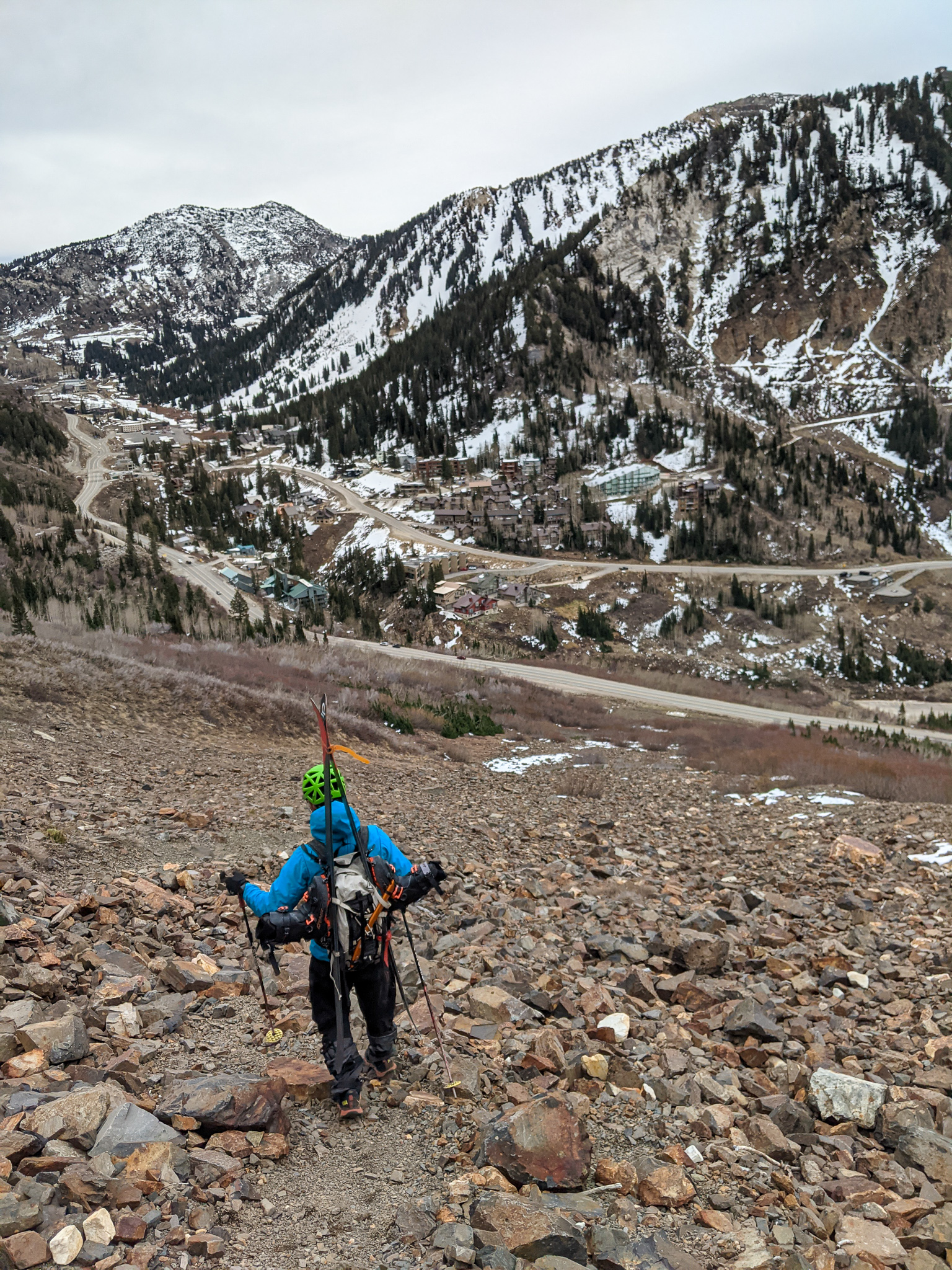