Skjervheim during his 24 hours of ski touring. Image: Outdoor Sportswire

Lars Erik Skjervheim and Malene Blikken Haukoy of Norway set new world records in ski mountaineering last weekend, May 19th and 20th. The two set out to skin and ski as much vertical as possible in 24 hours at Myrkdalen Ski Area near Voss, Norway.

Peeling off the skins. Image: Snews

37 year-old Skjervheim, a Dynafit athlete, set the record by completing 20,939 vertical meters in 24 hours (68,697.5 feet) on a course of 1.9 kilometers (.56 mile). He climbed 460 meters of vertical each loop, and completed the loop 44 times. Mike Foote held the previous record of 18,644 meters, set on a course with 311 meters of vertical in March 2018. Skjervheim stated that hours 14 to 19 were the hardest, with energy starting to quickly dissipate and muscle aches coming on. He had been dreaming of this moment for 3 years however, so he was not going to give up. 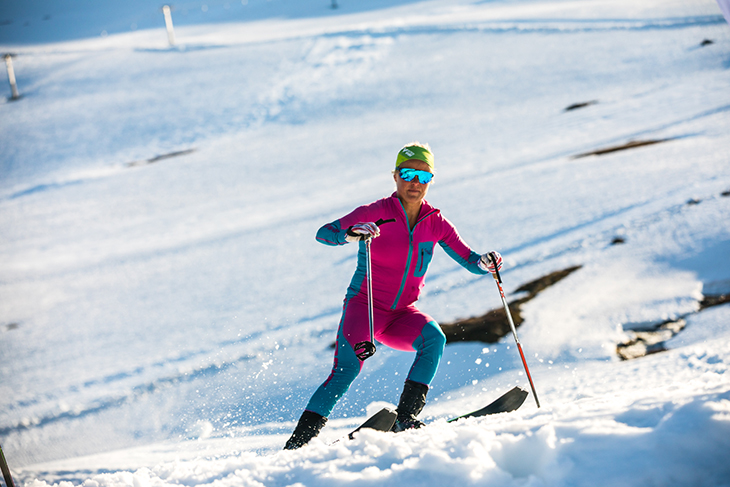 Haukoy, 26 year-old member of the Norwegian National Ski Mountaineering Team, set the first female record for this category by completing 15,440 meters of vertical (50,656 feet) on the same course. She has set the standard high, and hopes that more women will get out there and compete.

Both athletes did the climb and descent on skis from the Dynafit DNA Line, an ultralight touring setup. With them was a 15-person team to provide nourishment, first aid, ski tuning, skin drying and other help along the way.