The idea of a dual-sport bike-to-ski-tour from Mt. Bachelor, Oregon to Broken Top was not an easy sell at first.

But after a few hours of après ski in the Mt. Bachelor Ski Area parking lot on Friday afternoon, coupled with some ego and a taunting view of Broken Top that evening, we all talked ourselves into the 12+ mile mission.

We rode the lifts on Friday morning at Mt. Bachelor, taking a few top-to-bottom runs to stretch our legs and take in the views.

Phil, David, and I hiked from the top of the Summit lift at 9,000 feet to a high point on the peak with Broken Top, the Three Sisters, and other Cascade volcanoes within view in all directions.

Skiing into the cirque and arcing turns down to the base, I was stoked about our timing on the trip.

Oregon and the Pacific Northwest fared much better than California this year for snowfall, and the corn snow was prime up top.

For comparison: Mt. Bachelor reported 374″ of total snowfall this season while Squaw Valley, California ended the season at 306″.

The view was beyond inspiring, and I thought about the fourteen-mile round trip Broken Top tour the three of us had done a few years back.

At the time, we somehow came to the conclusion that the approach was only four miles, but we did not realize that until we had already gone that far and still had not reached the peak…from then on, the “4-mile approach” became a cruel inside joke between the three of us.

The snow at the top of Mt. Bachelor skied surprisingly well, given the steady breeze and incoming cloud cover.

But about halfway down, the snow quickly deteriorated…it was dirty, heavy, and grabby in spots while the bottom was groomed and much better.

The lifts closed at 1.30 p.m., and so we pulled out the cooking supplies and grilled some bratwurst for lunch in the parking lot.

Pete and Johan, who drove over from Southern Oregon, were joining us for the evening, and after a few rounds of beers and brats, we all agreed to a 4 am wake up.

We chose to bike to the trailhead because Cascades Lake Highway North of Mt. Bachelor was not open to cars yet, but there was snow removal done to allow bikes.

We strapped skis, boots, poles, crampons, etc., onto our packs and biked the 2.6-miles to the Todd Lake trailhead as the sun started to rise.

After locking our bikes to a tree and changing into ski boots, we started skinning up the wide trailhead until reaching Todd Lake.

We then ascended a ridge filled with mossy, old-growth trees, and eventually, South Sister and our objective came into view.

While navigating the undulating terrain, the wind started to make its presence known, but it kept the temperatures nice for climbing.

A party of three quickly skinned up to a saddle on the southwest ridge of Broken Top, and another pair took a different route.

We opted not to hike up the gut this time, given the wind and the snowpack as well as the pucker factor on the last ascent a few years ago.

We eventually opted to boot pack the ridge, and most of us had crampons, whippets, and/or ice axes.

Although we had put some serious miles in that morning, I started to get a second wind on the boot pack as the adrenalin kicked in.

Once we gained the saddle in the ever-increasing wind, we rewarded us with an unobstructed view of the Three Sisters Wilderness.

It was cold and breezy at the summit, and we had sandwiches and summit beers, but I tried not to think about the return trip too much.

The wind had kept the snow nice on certain aspects, but the May sun was also a factor, and some roller balls were starting to form, so it was time to descend.

All five of us were rewarded with great Cascade corn snow that is always worth the journey.

Fortunately, we had stashed some beers where the bikes were locked in the forest, and those cool drinks kept us motivated on the return trip.

Once back in the parking lot, we brought out the barbecues, were happy to find some chairs, and reminisced about past and future adventures. 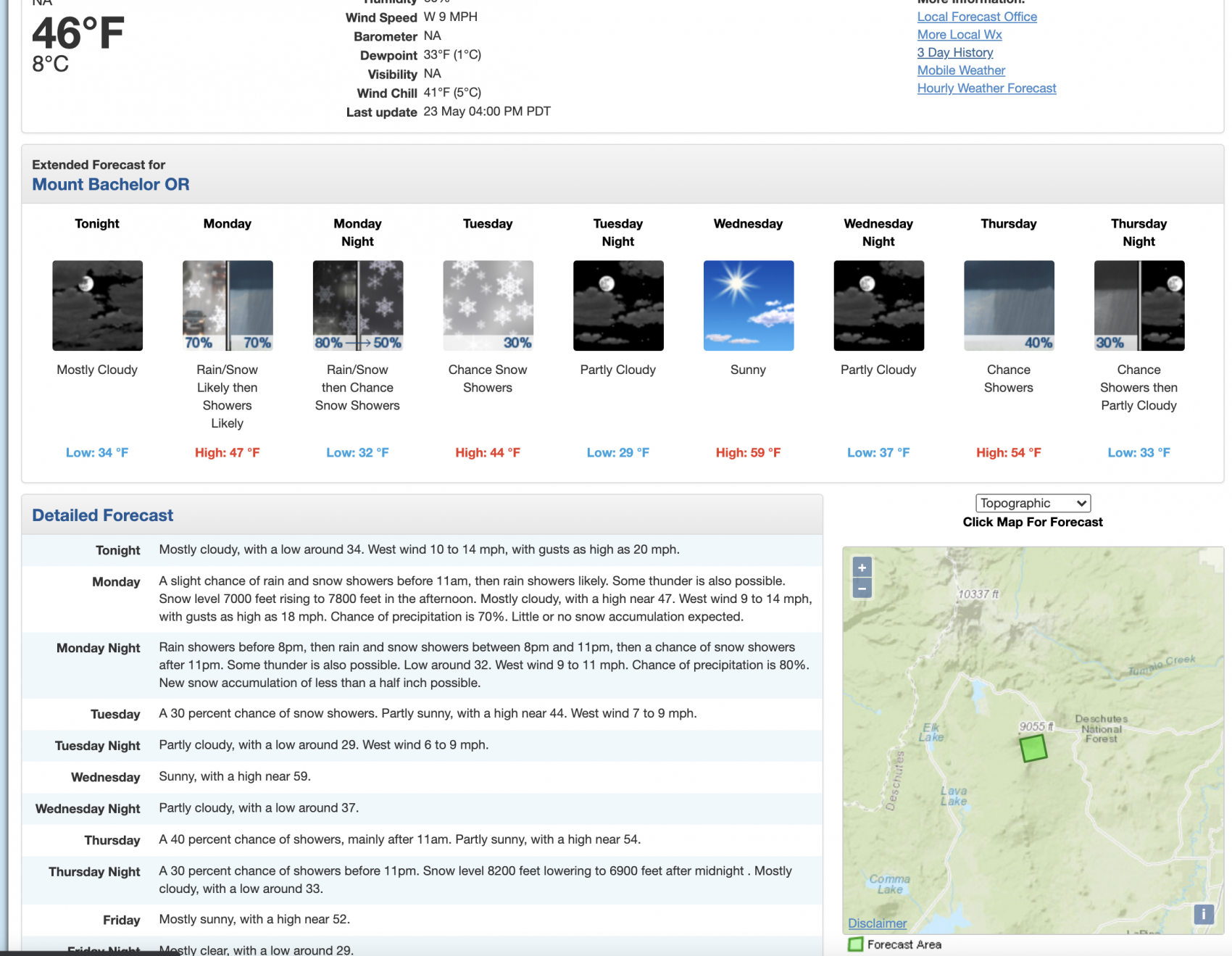