An investigation by an independent technical safety regulator has confirmed that the Sea to Sky Gondola’s cable was deliberately cut by vandals, reports Global News.

The incident at Squamish, BC near Whistler, happened in the early hours of Aug. 10, causing most of the gondola’s 30 cabins to fall to the ground, many of them damaged beyond repair, resulting in over $1-million in damages. No one was hurt.

“Our technical failure analysis has concluded that the haul rope wires were substantially cut while under tension,” Jeff Coleman of Technical Safety BC said in a statement.

The cut, according to the investigation, was somewhere towards the top third or quarter of the gondola route. Tests found no evidence that the wire haul rope was defective. It also concluded a part of the cable that was previously damaged was not involved in the collapse.

The report also concluded a likely instrument used to cut the cable, however, the information was redacted. 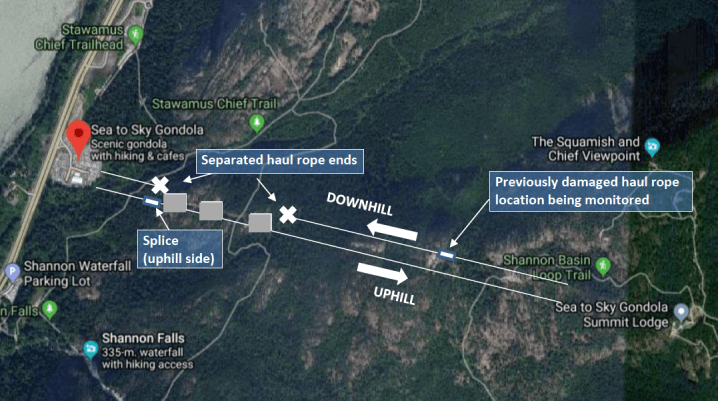 A map showing where the Sea to Sky Gondola’s haul rope was cut. Credit: Technical Safety BC

The Royal Canadian Mounted Police (RCMP) reported at the time that they believed someone purposefully cut the 5.5cm (2.16″) diameter cable of the Sea-to-Sky Gondola. RCMP continue to investigate the incident.

The company that operates the gondola says it hopes to have the popular attraction reopened by spring 2020.