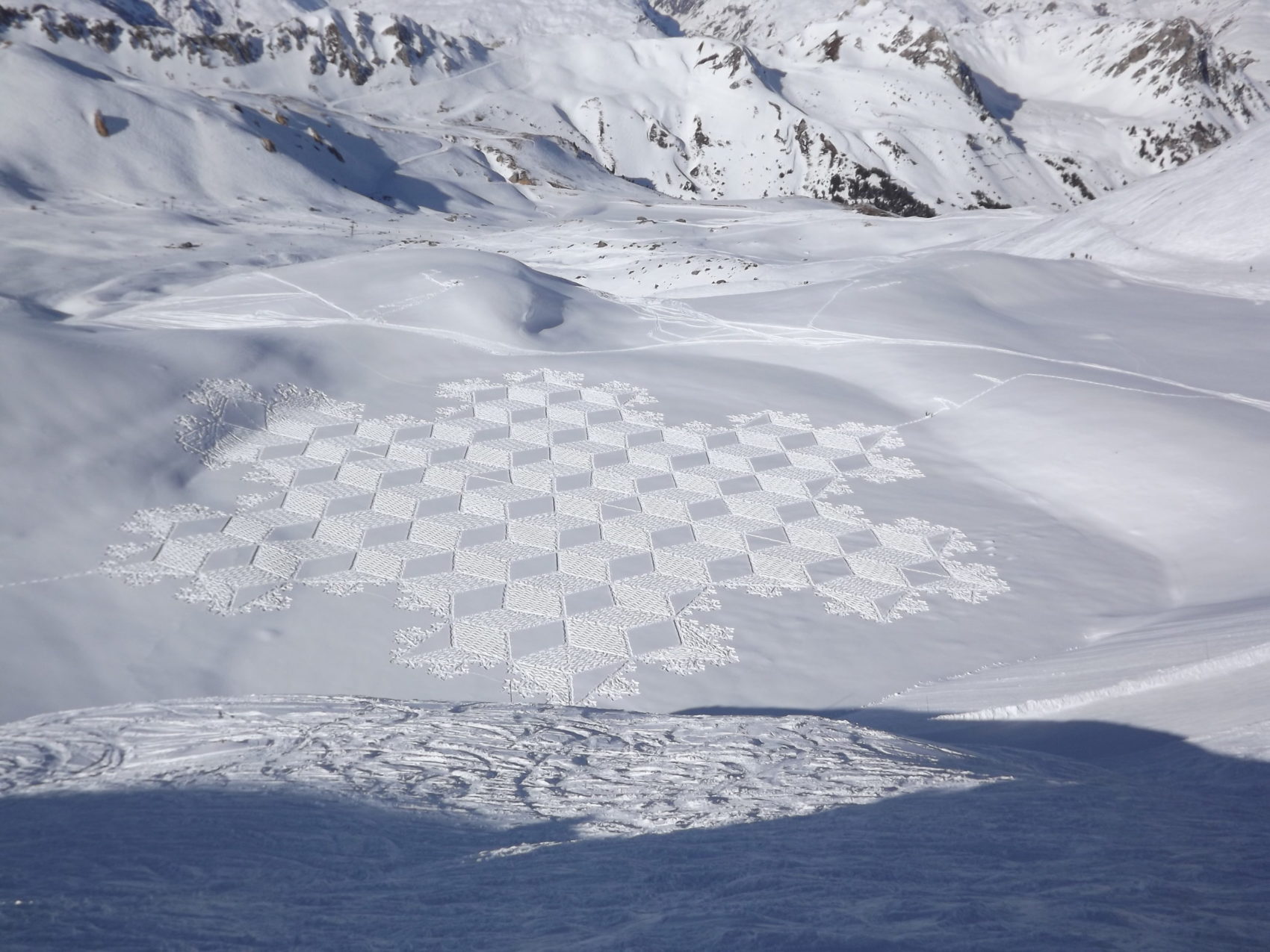 If one came across one of these drawings in the middle of Iowa’s farmland, it would be common to chalk up credit for such fantastic art to some extraterrestrial beings. However,  a snow artist named Simon Beck, born in London in the 1950s is responsible for hundreds if not thousands of intricate designs made using the medium of snow.

According to 303 Magazine, Beck originally majored in Engineering at Oxford, prepping him to pursue a career as a cartographer later. It wasn’t until sometime later in life, when Simon began spending his winters at Les Arcs, France, that he tapped into his ability as a landscape artist or snow artist.

After speaking with Simon via the ‘intraweb’ a few weeks ago, he filled me in on some background beta regarding his art. Simon always trained for a hobby of his called competitive orienteering. He spoke about how his art and his training could go hand in hand, saying, “in 2009, I decided to take it seriously and make it my primary form of winter exercise (replacing training for competitive orienteering) and give the snow drawing priority over skiing when conditions were good.”

Simon made his first snow art on the Club Med Lake outside Arc in or around 2000. I asked Simon what inspired him to start making such masterful art.

“It happened more or less by chance. I made a few drawings for fun, but with no digital camera, no access to the internet, it was not for a while until I realised there was nobody else doing anything similar, and it had apparently not been done before” -Simon Beck

As I scratched the surface a little deeper, I wanted to know why Simon continues to work so tirelessly making such breathtaking art that, in most winter climates, it could be swept away or covered up in hours. Simon explained to me that most of the work he does is simply for exercise and self-satisfaction. Occasionally he is commissioned by corporations wanting him to draw their logo for advertising. Most of all, it sounds like Simon enjoys using his background as a cartographer to go out and play in the wilderness. Like many of us, he wasn’t cut out for working in an office.

Simon did mention that he has photos of almost all of his completed drawings and saves the rights to some of his favorites which can only be seen in his book, Snow Art. What a great conversation starter for the coffee table of any outdoor enthusiast or artist!

So how does he do it? He cannot stand back and look at the big picture as he works. In our conversation, Simon explained that some of his experiences go into making one of these drawings. He often drafts plans and then uses a magnetic compass, some mathematics, and his knowledge of geometry to aid him along.

“The first stage is accurate measuring, l use a magnetic compass and distance determination via pace counting. This is the most chalelnging part, but if you get this first process right then it gradualy gets easier as the drawing progresses.” – Simon Beck

Some of Simon’s drawings take several sessions to complete. In 2013, Beck made a drawing on the reservoir in Arc that he reported taking four sessions of 8 hours. He has to be very careful that he has the proper weather window available when working on such elaborate pieces.

Here is the progression of one such drawing

Simon also explained that when he is not making snow art, he enjoys skiing and competing in orienteering for fun.

Beck spends lots of time at the beach when there’s no snow. He can spend hours training in the summer by walking or jogging in the sand. Also, you guessed it; Simon makes about 20 drawings per year on the beach.

To find out more about Simon Beck’s ‘out of this world’ artwork, follow him on Instagram and stay up to date on Simon’s future designs.