This week, a break in the dry spell is coming for the Pacific Northwest, with accumulating snow across the Cascades.

Snow totals of 2-5″ are likely for most Washington resorts, with comparatively heavy snowfall of 5-10″ for the mountains of Oregon.

The large-scale pattern is evolving for the better, and additional storm chances are probable in the second half of February.

A potent upper-level disturbance will progress into the Pacific Northwest on Monday morning. Snow will begin along a cold front associated with this disturbance, starting sometime around first chair in the Washington Cascades and spreading southward into Oregon through the late morning. Soft turns will be found across the Cascades by the last few laps on Monday afternoon, though the best turns will be south of the Columbia River.

Snow will taper off in Washington late Monday evening. Accumulations will be modest but certainly enough to improve riding conditions, with 2-5″ of snow expected. Mt. Baker is likely to be closer to the low end, while Steven’s Pass and the Snoqualmie areas will have the best chances to end up near the top of the range, should a PSCZ bring some extra accumulations Monday night.

On Wednesday, another system will brush by, bringing some clouds and a few snow showers but negligible accumulations.

A ridge parked upstream of the Northwest has been pushing the storm track northward into Canada for the past couple of weeks, keeping the good skiing generally north of the international border. Model forecasts (below) suggest the ridge will flatten and retreat slightly westward over the next two weeks.

This is a good thing for the region and will increase the chances for snow as we head deeper into February. With any luck, I’ll be back to writing juicier forecasts than this soon. 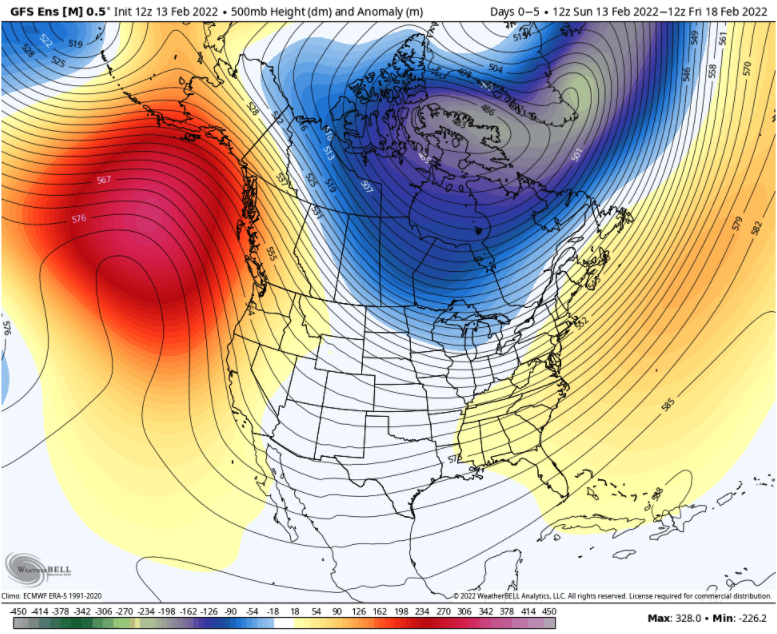