Waking up at 2:00 a.m isn’t something that typically excites me, but the idea of witnessing a sunrise over the stunning North Cascades of Washington State had me immediately jumping out of bed.   My hiking companion and I arrived at the trailhead exactly at 3:30 a.m, and we quickly set off with the goal of summiting before the sun rose over the horizon roughly around 6:30 a.m. To reach the summit, we had to ascend around 3,800 feet over 4 miles of trail, no easy feat in just three hours.

The Cascade mountains of northern Washington feature some of the most breathtaking views in the lower 48, but to access these views, you oftentimes have to slug through dense forest that lacks much of a view. At 4 a.m, the dense forest blocked out what moonlight there was and created some of the darkest conditions that I’d ever hiked in. I would turn off my headlamp and barely notice a difference between my shut eyes and the surroundings around me. You could loosely make out the silhouettes of nearby trees, but nothing else. Seriously, it was dark.

The trail was steep, but soft and well-maintained. The crisp early-morning air was almost chilly, encouraging us to keep up the quick pace. After about two hours of hiking, the morning twilight began to creep over the horizon. Right around this time, we started to exit the dense forest into meadows full of wildflowers. This is where the spectacle began, and it’s one I’ll never forget.

We hiked through the meadows, stopping every several minutes to take in the stunning purple twilight. Realizing that our goal of summiting before the sun came over the horizon was in danger, we picked up the pace and eventually began to break through the treeline.

The entire hike, I had been anxiously waiting for a view of Mt. Baker. Anyone who has ever spent time in the Northern Cascades of Washington is familiar with Mt. Baker, the heavily-glaciated stratovolcano that dramatically reaches 10,781 feet into the air. With a prominence of nearly 9,000 feet, Baker is truly a sight to behold. The mountain itself is also amongst the snowiest places in the entire world, if not the snowiest.

You likely already know this, but in 1999, Mt. Baker Ski Area experienced a record-breaking 1,140 inches (95 feet) of snowfall. The ski area isn’t technically located on Mt.Baker and only has a top elevation of 5,089 feet, so one can only imagine how much snow fell on the higher elevations of Mt. Baker itself. After finally breaking through the treeline, the first view of Mt. Baker froze me in my tracks.

At this point, after taking numerous breaks to soak in the twilight-lit views of Mt. Baker, we were in serious danger of missing the goal of summiting before sunrise. However, the summit was near. Another major peak in the North Cascades is Mt. Shuksan, a non-volcanic massif that’s known for its symmetrically jagged peaks. Reaching 9,131 feet, Shuksan is yet another stunning highlight of the North Cascades. We reached a steep portion of the trail, and as we crested over this steep portion, Mt. Shuksan suddenly came into view. The scene was something straight out of a movie. 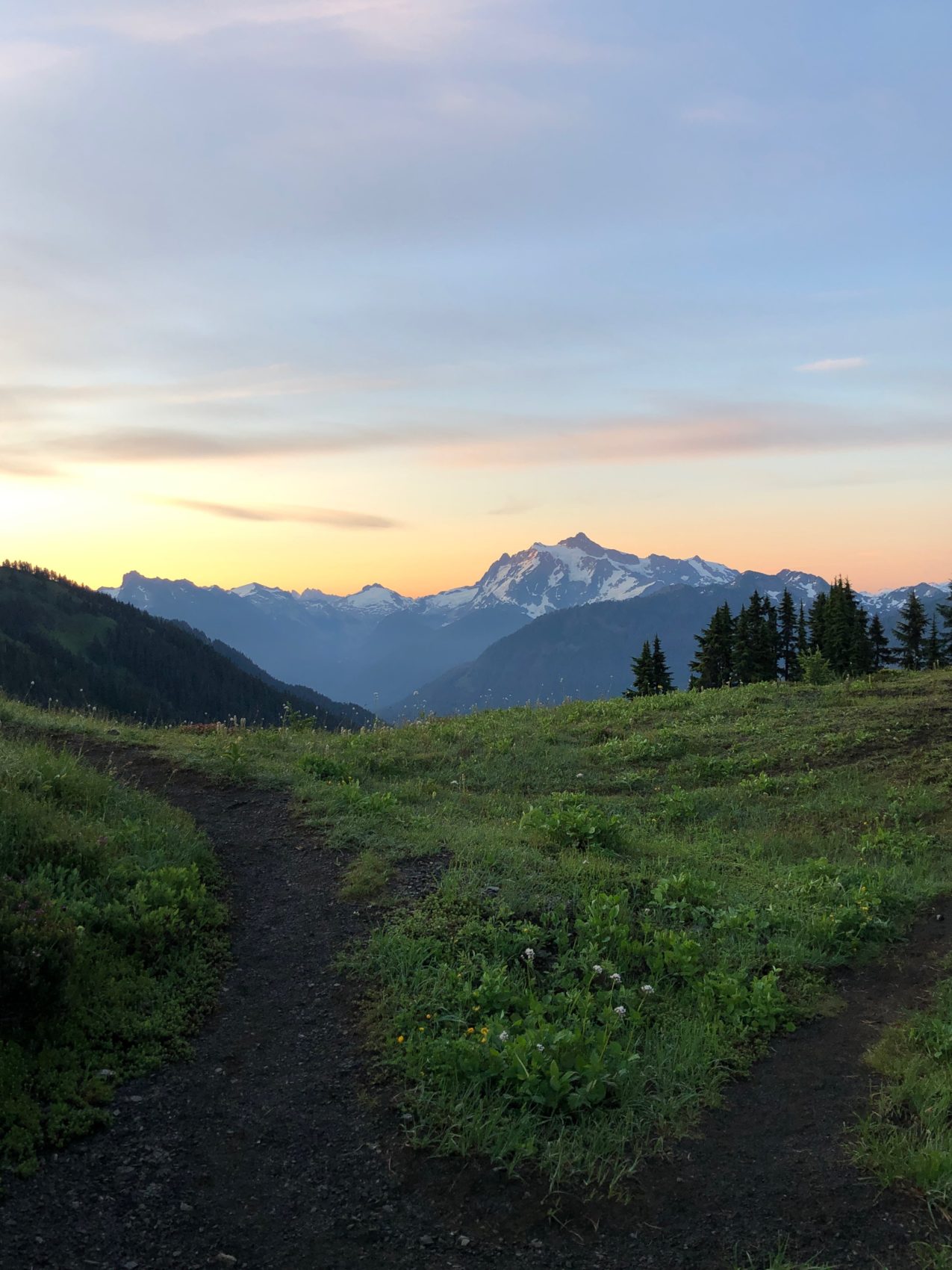 Shortly after the first view of Mt. Shuksan, we finally reached the summit with only several minutes to spare. Pictures never do it justice, and this case is no different.