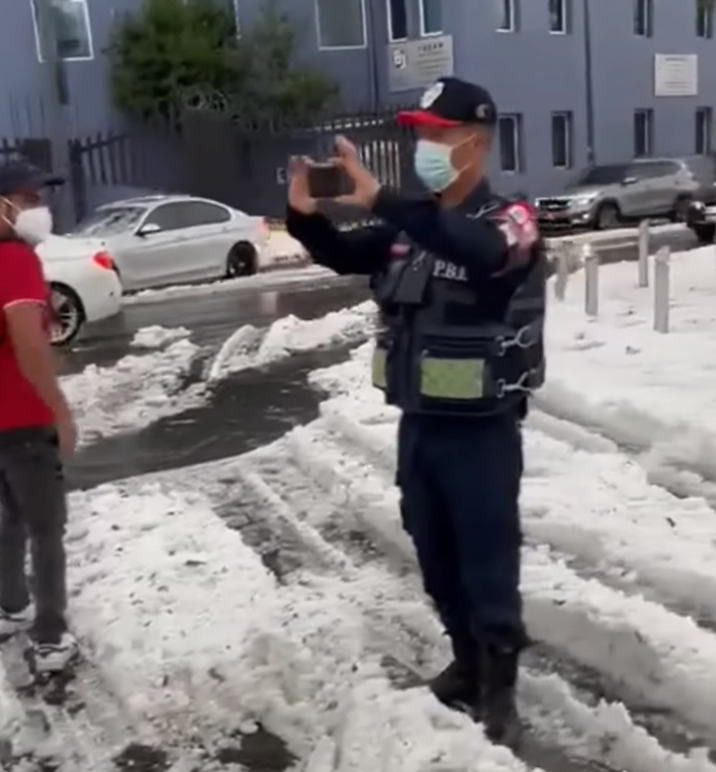 In order of most popular, these were our top five posts of the last seven days:

If you want to receive our top three posts in your inbox every Thursday, sign-up here: SnowBrains Weekly Top 3 Posts Email Sign-Up

Mexico City was pummeled by an intense hailstorm on Sunday, June 12, causing chaos on the roads as a thick blanket of ice formed over the asphalt. Accuweather reports that several homes were damaged but that no one was injured.

If you're not worried, you're not paying attention. pic.twitter.com/eerXEvhh5s

To read the full article: [VIDEO] Mexico City Pummeled by Freak Hailstorm on Sunday That Made City Look Like it was Covered in Snow

Bob Salem will attempt to make history next month by crawling up Pikes Peak, a Colorado 14er, pushing a peanut eleven miles up the slope with an undisclosed “contraption” taped to his nose.

As part of Manitou Springs’ 150 Year Celebration of city life, Salem is hoping to be the first person in the 21st Century to push a peanut up 14,115-foot Pikes Peak with a contraption taped to his nose. This is no easy feat, but with support from the community and region at large, this peanut pusher can cement his place in history. The Peanut Push will begin on Barr Trail on July 9th and is tentatively scheduled to finish no later than July 17th.

To read the full article: Man Will Attempt to Make History by Pushing a Peanut up Colorado 14er With His Nose

Current Westwide Snowpack More Than 3000% of Normal in Some Areas

Late season snow in April and May was awesome for skiers and riders, allowing a number of ski areas to extend their seasons and keep the stoke going.

Following the dry start to the year it was no more than we deserved, right?!

The impact of that snow can be seen in the current snowpack figures across the west. With the exception of Colorado, Utah, California, and Nevada, all other states are reporting statewide snowpacks at least double the average for this time of year. Great news for backcountry enthusiasts.

For the full article: Current Westwide Snowpack More Than 3000% of Normal in Some Areas

Five injured climbers in critical condition had to be airlifted from Mount Shasta, CA, on Monday, according to a Facebook post from Siskiyou County Sheriff’s Office. One of the climbers, who was later recognized to be a professional mountain guide with Shasta Mountain Guides, died as a result of her injuries.

Jillian Elizabeth Webster, 32,  tumbled more than 1,000 feet down Mount Shasta during dangerously icy conditions from a late winter storm on Monday. Webster, of Redmond, Oregon, was tethered to two other people when they lost their footing and slid between 1,500 and 2,500 feet in an area known as “Avalanche Gulch,” according to a press release. The fall was reported at 8:35 a.m.

7 Ways to Up Your Game as a Resort Skier

Resort skiing is awesome, no matter how you look at it. Chairlifts that float you up the mountainside, hot laps with friends, ski patrol doing all the work so you don’t have to worry about avalanches—skiing inbounds is a vibe, and if you’re like me, you might do it a lot. But if you’re also like me, then you’re constantly coming up with ways to challenge yourself—to be a better skier. We hear all about tips and techniques to be better backcountry users when navigating avalanche terrain or being efficient on the skin track. But what about inbounds? How can you improve here? Has anyone ever talked about this?

To read the full article: 7 Ways to Up Your Game as a Resort Skier

Top Social Posts of the Week

If you want to receive our top three posts in your inbox every Thursday, sign-up here: SnowBrains Weekly Top 3 Posts Email Sign-Up