We were frozen—petrified with fear. Near the end of the bootpack up to the ridge, it suddenly got extremely steep and icy. It was only 20 feet to the ridge. But 20 feet feels a hell of a lot further on a 60-degree top section of a slope. It didn’t look that steep from the bottom before we started booting. Neither of us had crampons but one of us had an ice ax. Climbing down was no longer an option because it would mean a certain fall all the way down to the flatlands below, with rocks and cliffs on the way there. Up was the only way.

Tyler, an old buddy from college, and I skied the North Face of Mount Tukuhnikivatz in the La Sal Mountains of Southern Utah on Monday. It was a thrilling, beautiful, classic ski descent that scared the living hell out of both of us. Because it’s one of the “50 Classic Ski Descents of North America,” we figured Tuk would be an epic addition to our Moab climbing trip. And it certainly was—but not in the way we expected.

We got to the Geyser Pass Winter trailhead late Sunday night around 11—Tyler drove from Bozeman and me from Salt Lake. It was snowing when we got there. We figured we might have enough new snow by the time we got to 12,000-feet the next day to actually float. We were stoked.

At 8:25 in the morning, we set off for the summit in these angry, avalanche-prone mountains. Spring is really the only time you can ski Tuk without a deathwish because of an intense persistent weak layer problem that plagues this range essentially every ski season. We had hoped to find soft snow by around mid-day when the sun was supposed to poke out. But that didn’t happen.

It was snowing on the way up. We toured through silent old-growth evergreens and aspen trees in rolling hills that we thought were mountains. We thought that until we got to Gold Basin. It was here we realized that those were only hills. The real mountains started here.

The cirque connecting Mount Tukuhnikivatz and its sister peak ‘Tuk No’ is giant. It’s also beautiful. From rolling, forested hills do these 12,000-foot behemoths appear and shoot up towards the sky. At the bottom of Gold Basin, you’re struck with a sense of awe. You see the tall peaks and their absolutely magnificent, several-thousand-foot avalanche paths that drain out right on top of you. You’re glad you’re here in the Spring.

It was lightly snowing, gray, and gloomy when Tyler and I started for Red Snow Cirque which leads to the summit of Tuk. We were the only two souls in this entire mountain range, or at least so it felt. We saw no other humans the entire day. It was like we stepped back in time in a forgotten corner of the desert. We set off for an already-set bootpack up the headwall of the cirque to the ridgeline.

We put our helmets on and I got out my ice ax. I still don’t know why I decided to leave my crampons in the car. Tyler didn’t have any, and I guess I figured the snow would be soft enough not to need them. I was wrong. For most of the booter up to the ridge, we didn’t need them. But for the last 20 feet when things got hairy I was cursing myself for leaving them.

It was pretty mellow on the booter until it got stomach-wrenchingly steep. We slogged up, in a safe zone between two cornices above, following an existing booter set by someone who either knew a lot more than us or a lot less. I had to borderline ice climb to the top from the start of the really steep section and then hand Tyler my ax so he could do it too.

Tyler stood there, breathing deeply, about 20 feet from the ridge. He couldn’t go back down because of how steep and rocky it was, and he couldn’t continue up without an ice ax either. We only had one between us, so I had to figure out how to get it to him. I whipped out my avalanche probe, stuck my ice ax through the metal loop on the end, and dangled it above him.

The probe was only a couple of feet too short. On the count of three, I dropped it down to him with the ice ax attached on the end. He caught it with tense precision. I laughed nervously as he used the ax to climb the rest of the way to the top. When he made it, we were both flooded with a sense of relief as we stared at the outer-worldly views of the red rock desert below. But that relief was short-lived.

We climbed the last 800 feet or so to the top, following another intimidatingly steep and icy booter with high consequences. To our left were hundred-foot cliffs. To our right, a scree-field above Tuk’s classic south-facing line, ‘Tuklear Reaction.’ Neighboring Tuk No was now shining gloriously in the sun. Red rock desert surrounded us. It was like we were looking down from a snowy high point on an alien planet in some weird stretch of the cosmos.

By the time we summited, it had stopped snowing and the sun came out in full force. The winds picked up and the snow didn’t really soften at all. It was now and only now did we truly understand that the north-facing ski down would not be fun—it was going to be survival skiing.

We haphazardly downclimbed over a patch of scree to the start of the descent. The snow was bulletproof. We transitioned and skied down cautiously—fearfully. Our line went all the way but only barely—the thin crux towards the bottom of the run was above a 50-foot cliff, with hundred-foot cliffs to its sides. A fall here would have serious repercussions.

I skied slowly and carefully, focusing on every rock-hard turn. I really didn’t want to fall. At certain points before the crux, I could make decent, almost-normal feeling turns while at others times I slid and sidestepped like I was two years old again on a scary run my dad forced me to do.

Then came the crux.

The crux was a narrow, couple-foot wide section of snow between rocks, all positioned about 70 feet above a massive cliff. The exposure was real. I yelled at Tyler, who was on a snowboard, to be really careful here. I sent the crux with one sweeping turn and made it through safely, immediately lifting the immense, psychological weight from off my shoulders. From here, I traversed above the cliff band to the right where I could continue descending. It was here on the bottom end of the descent that I finally got to make fun, fast turns in finally soft, corn snow. I mach’d down the apron at full speed, feeling a speedball of utter terror and pure, joyous satisfaction.

I love this shit. Tyler traversed to the right above the crux and ripped nice turns down the apron. When he got to where I was waiting we both nervously laughed for a moment. We did it. We were alive. And now we had a whole ‘nother thousand feet of corn and apron-skiing back down to Gold Basin. We let it rip.

Once again, in Gold Basin, we looked back at the summit, which seemed far off and forlorn. We were happy despite the utter terror we experienced for most of the day. We agreed that we could have planned the tour a little better but that it was overall a fun day, and we didn’t expose ourselves to too much overhead risk. We probably won’t ski Tuk again but we’re glad we checked the box.

There’s a reason Mount Tukuhnikivatz is a North American classic ski descent. It’s a massive undertaking with a long, 2500-vertical-foot descent in the middle of a red desert. It’s beautiful. It’s powerful. It’ll scare the shit out of you but still leave you hungry for more. 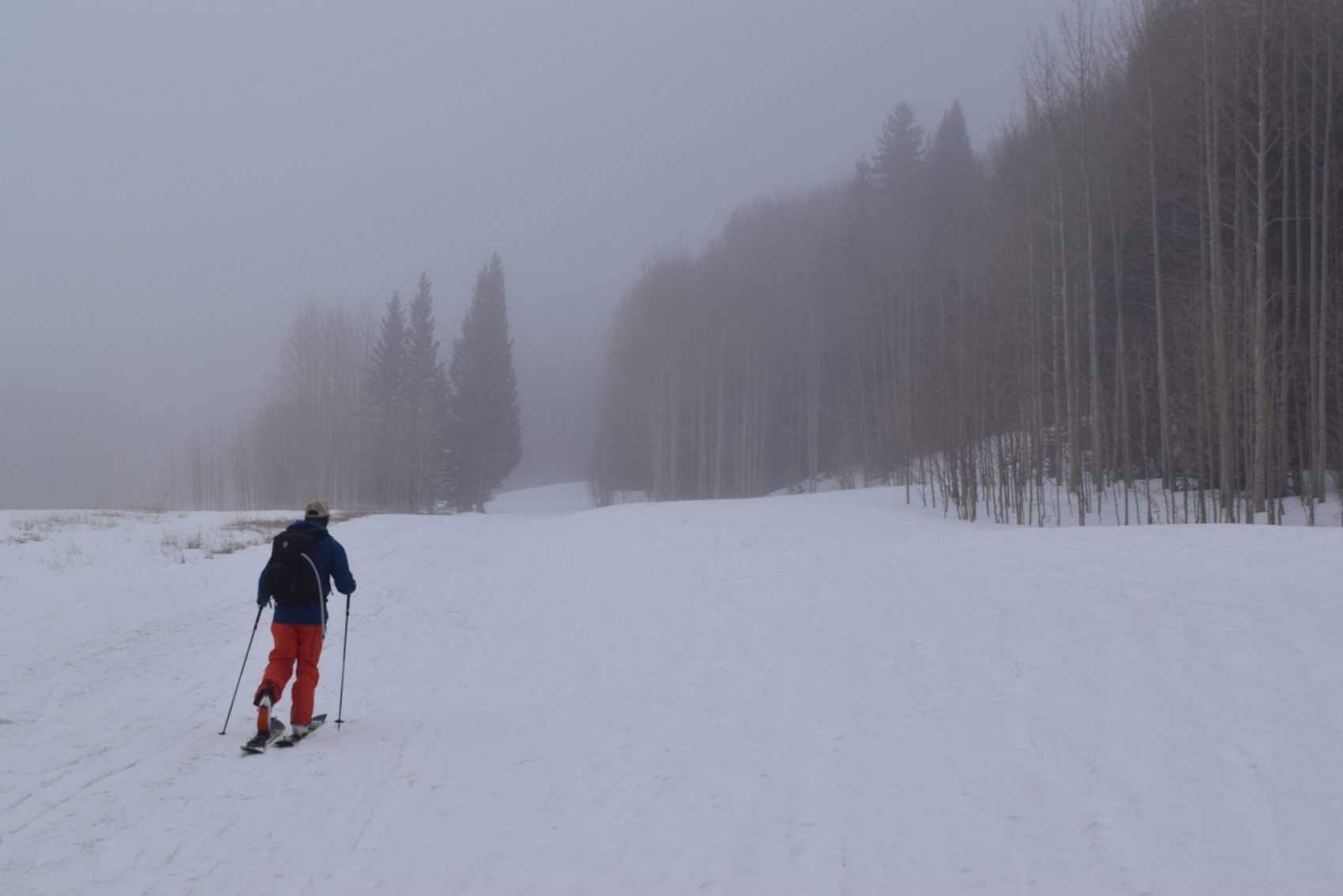 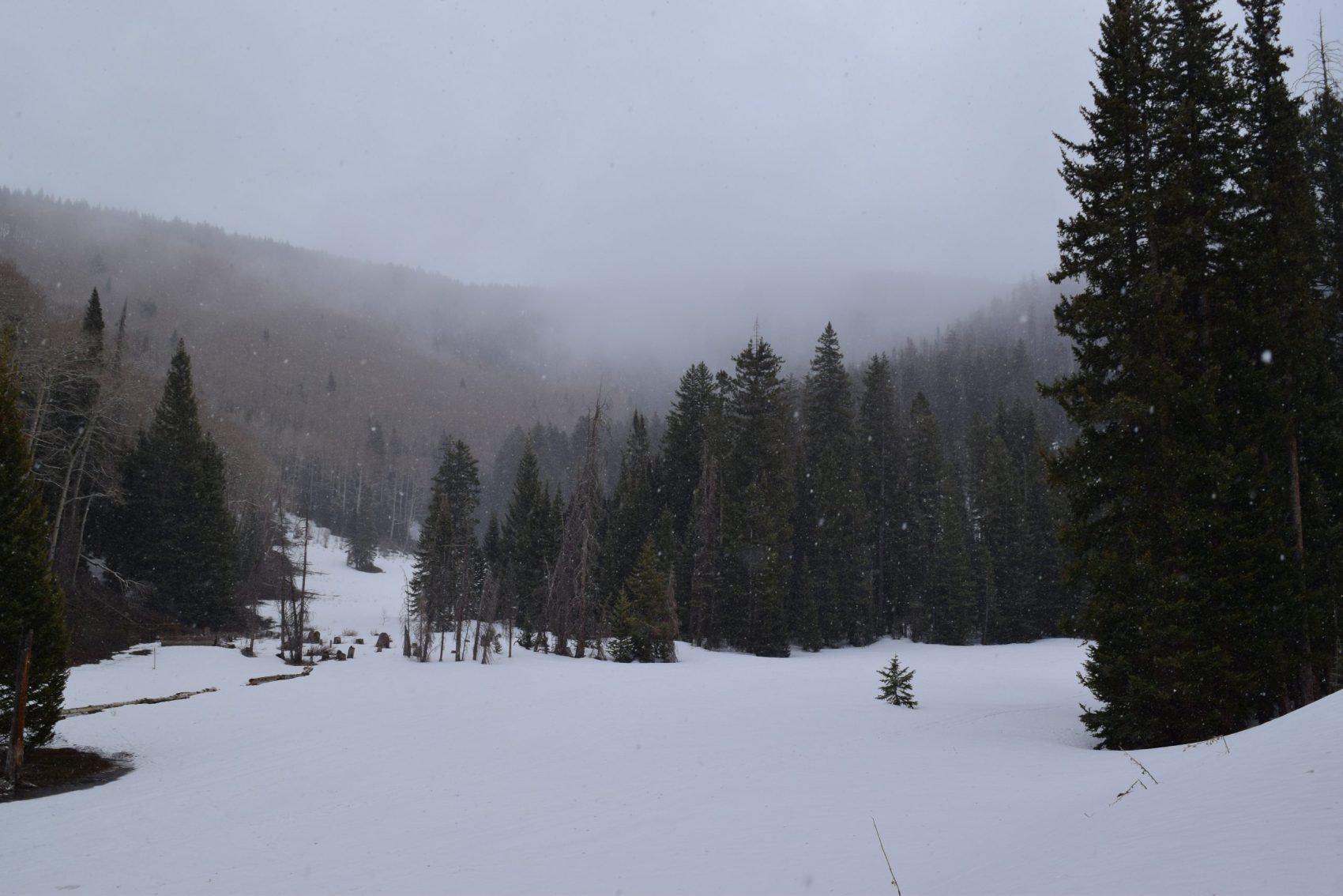 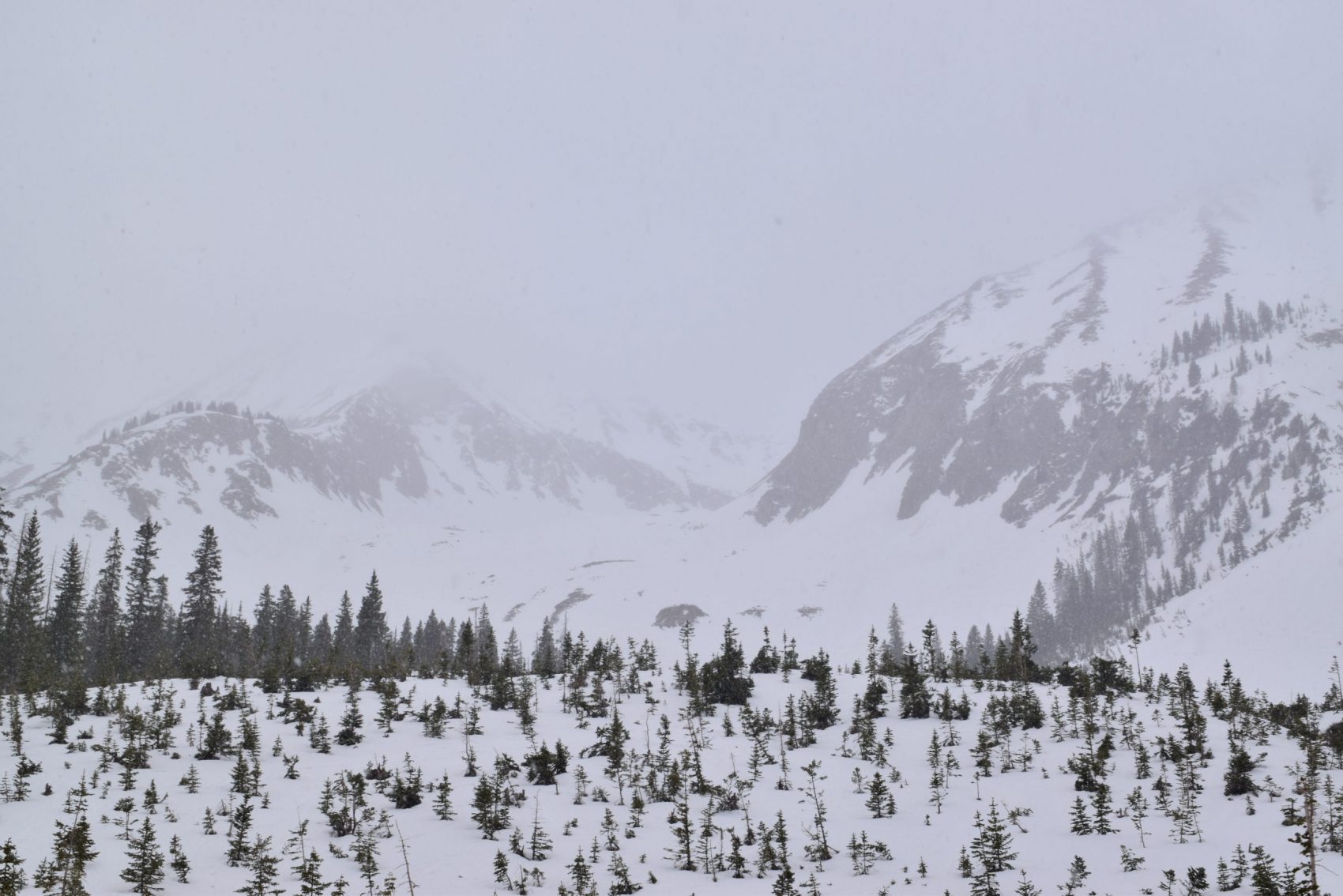 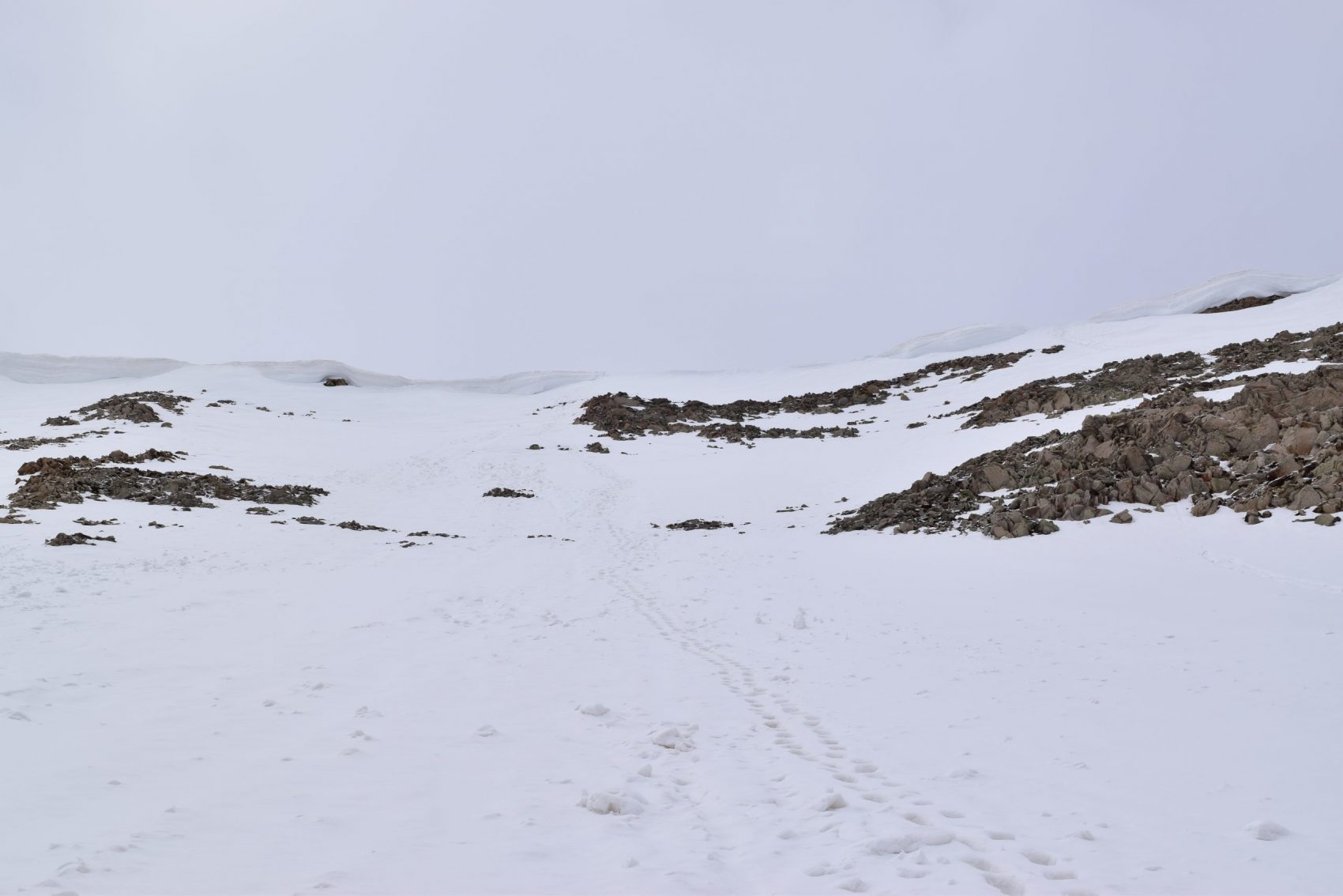 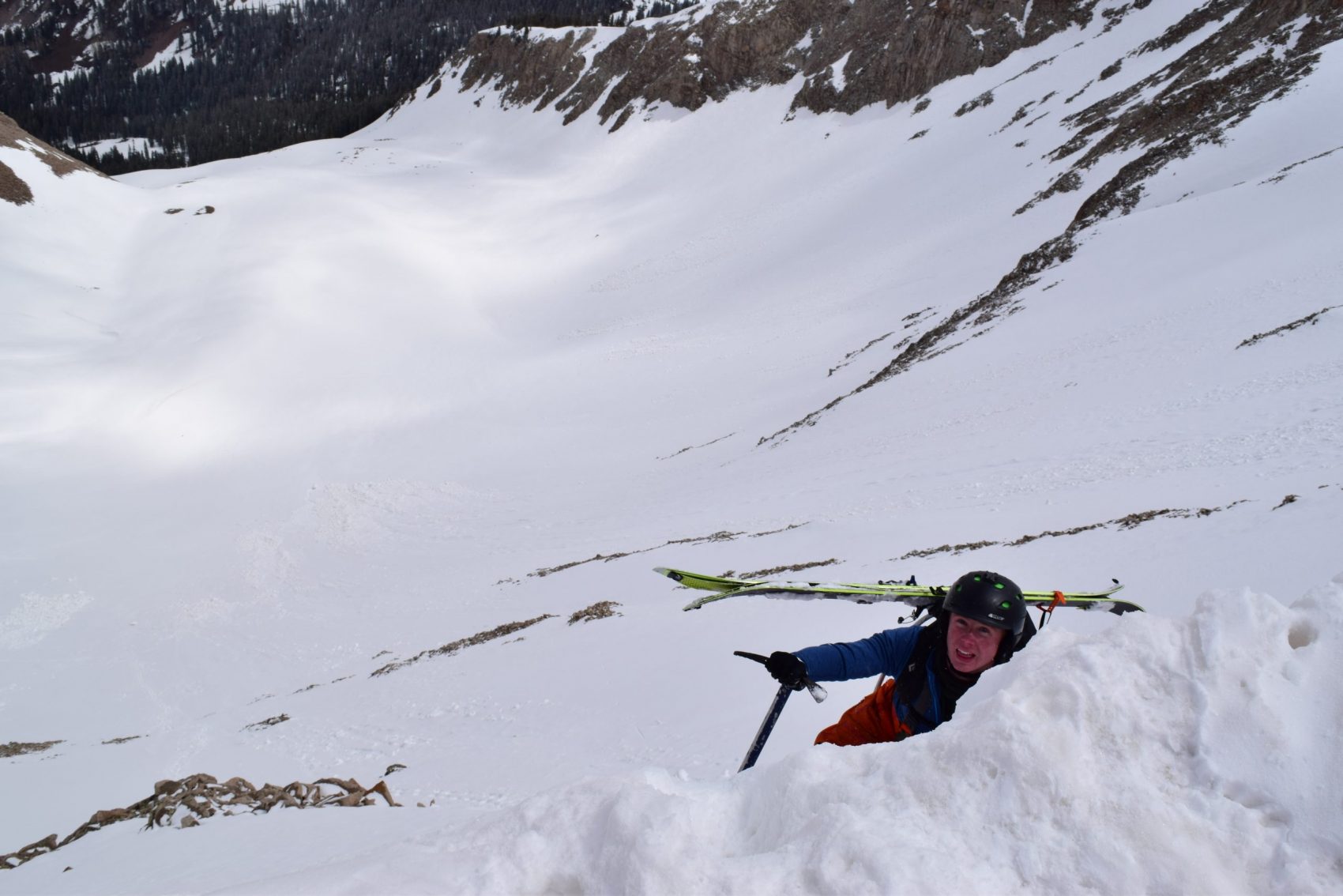 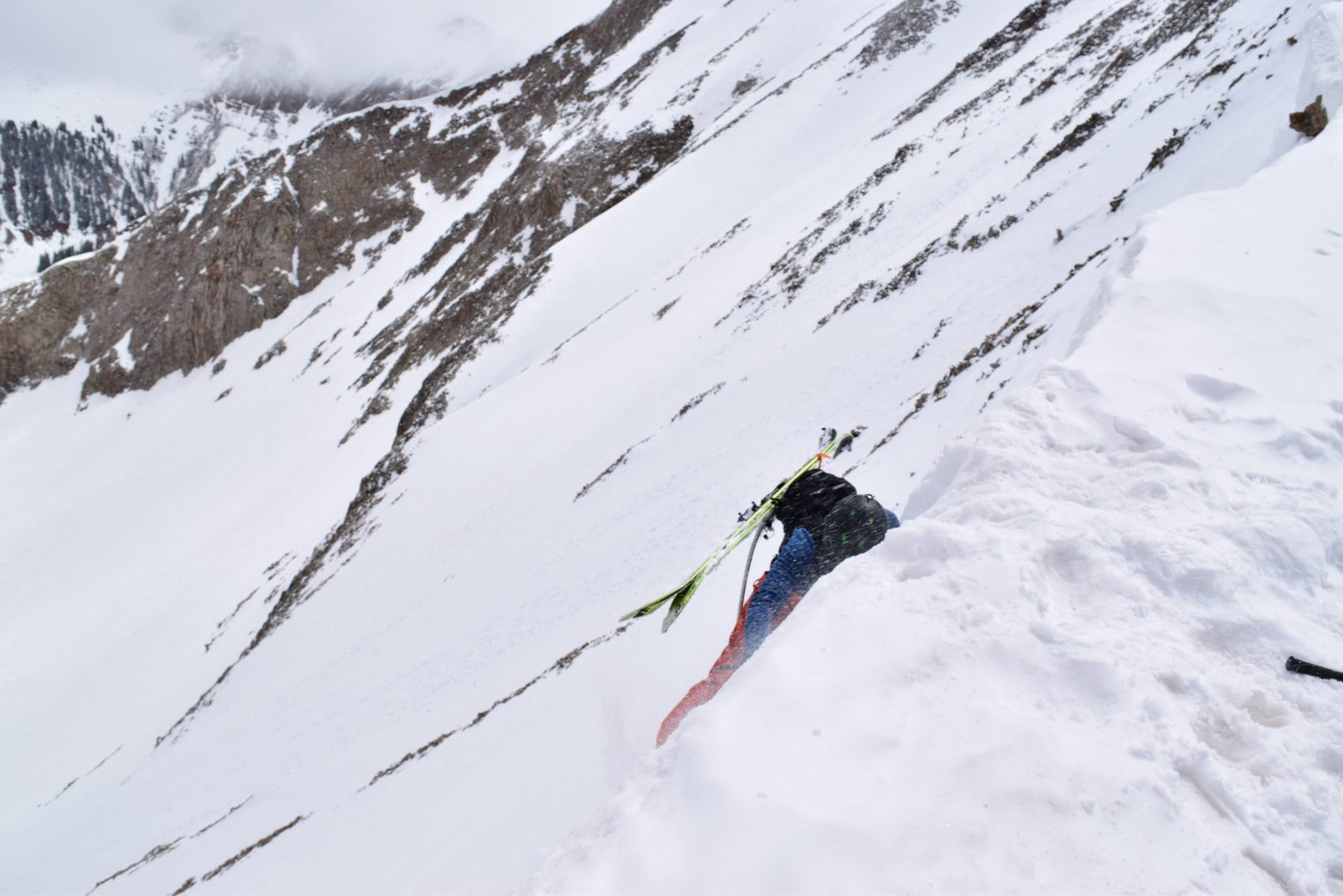 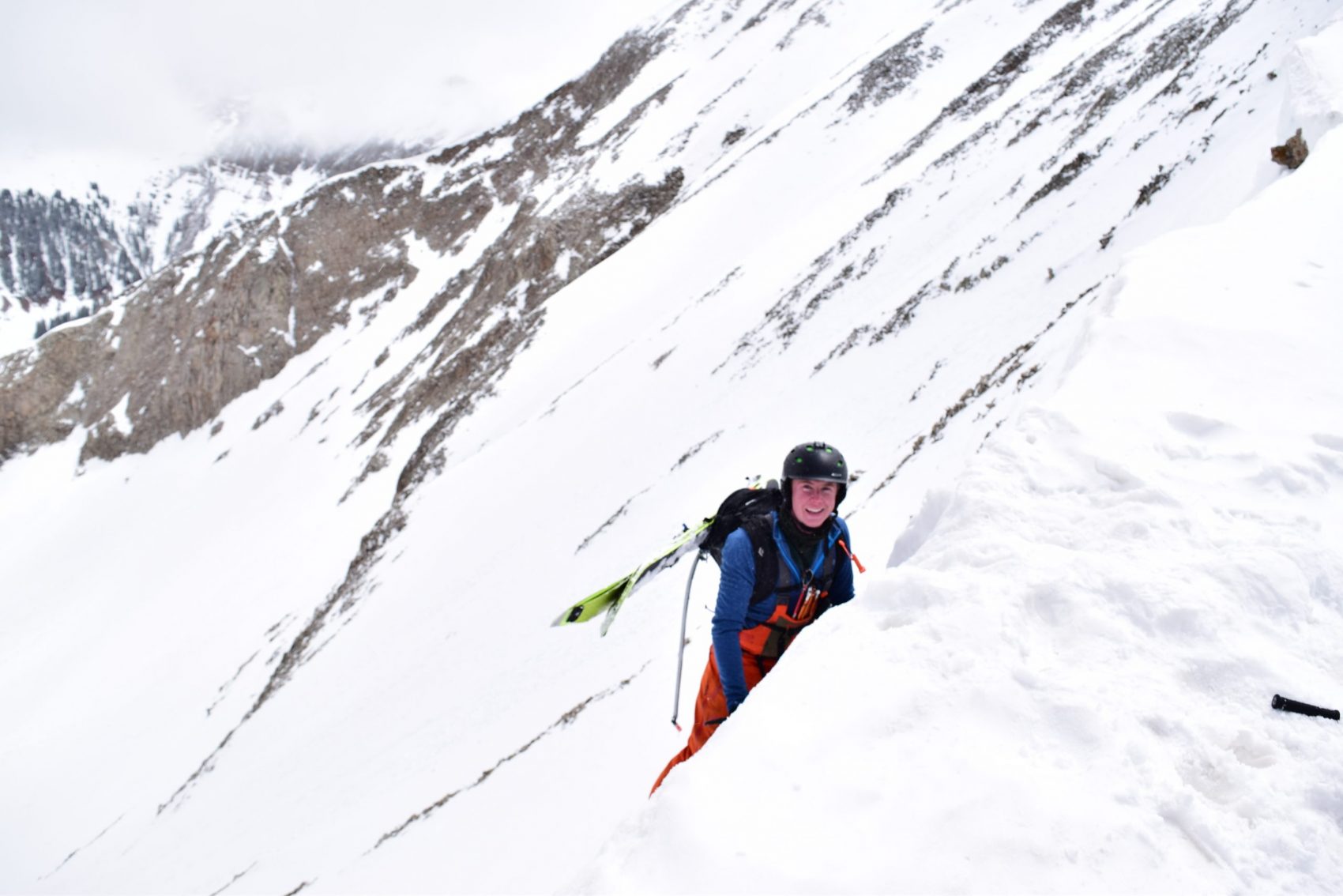 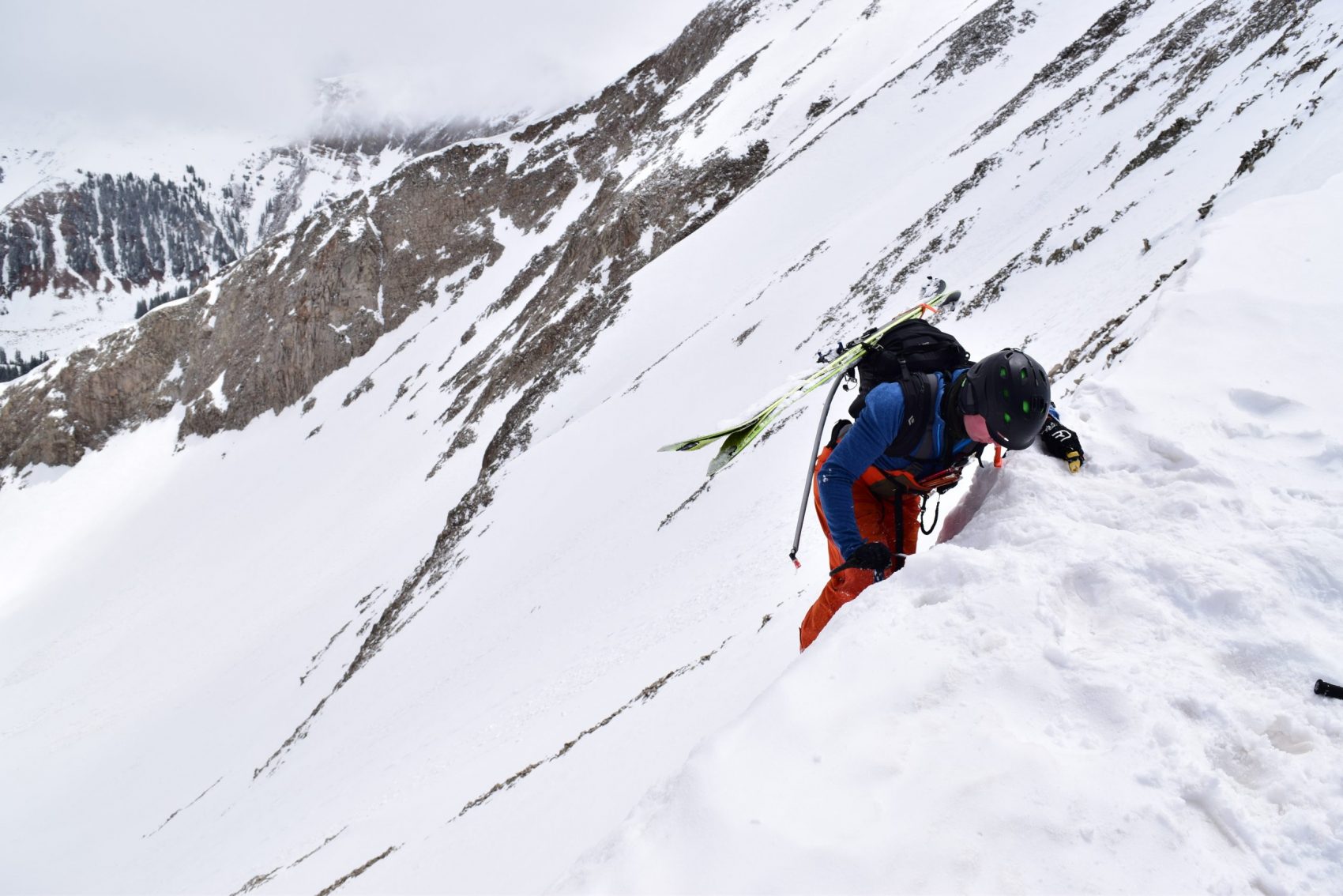 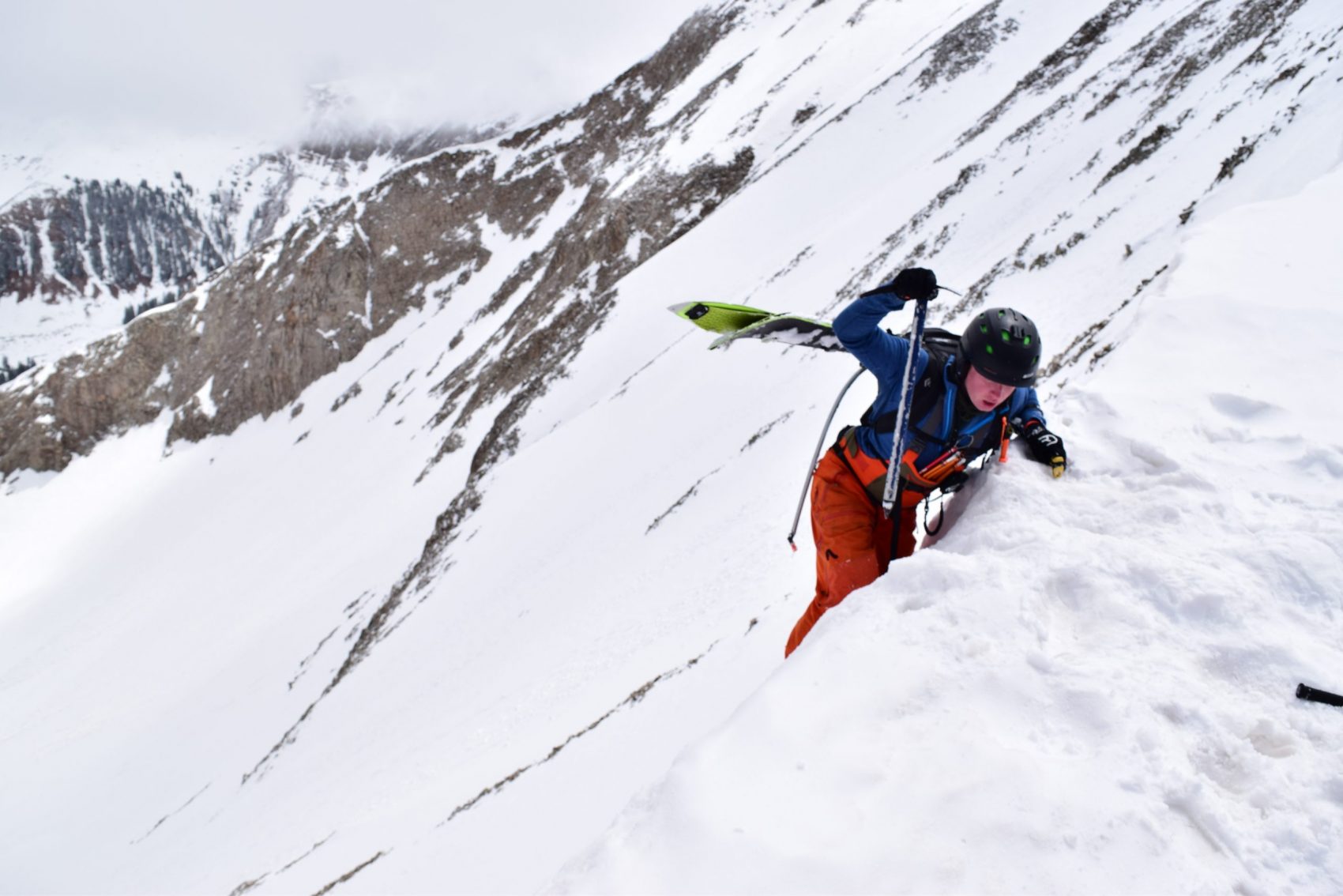 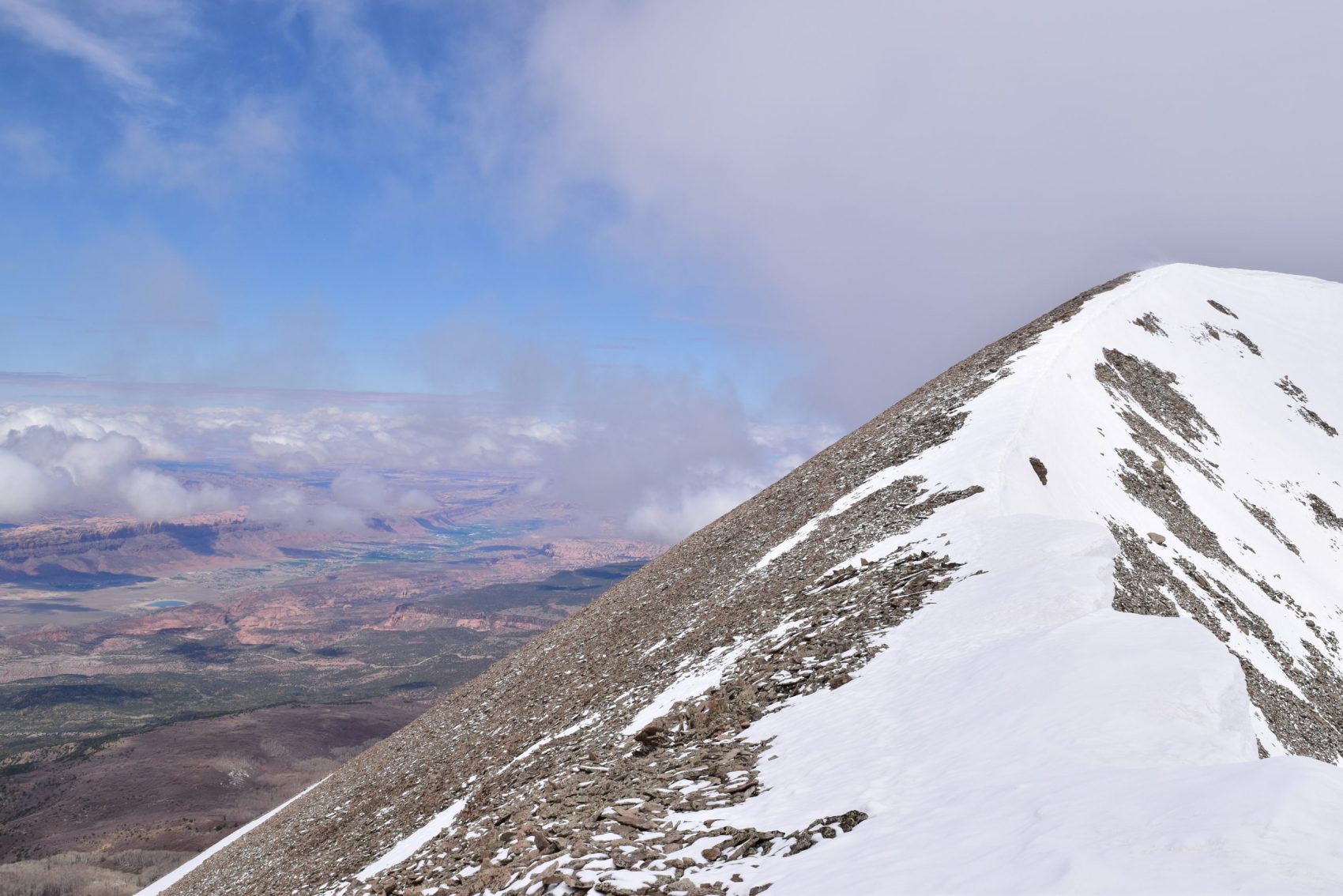 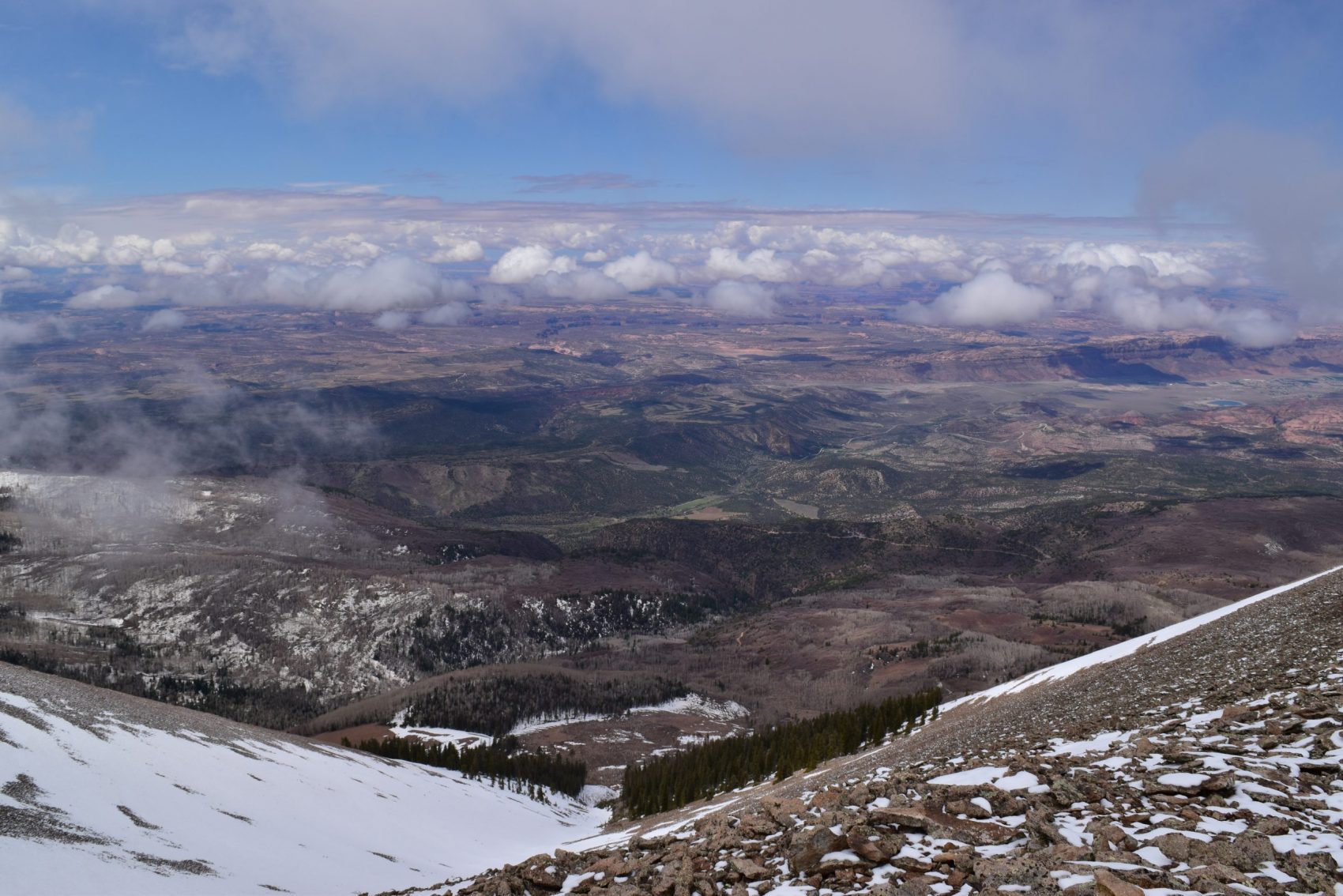 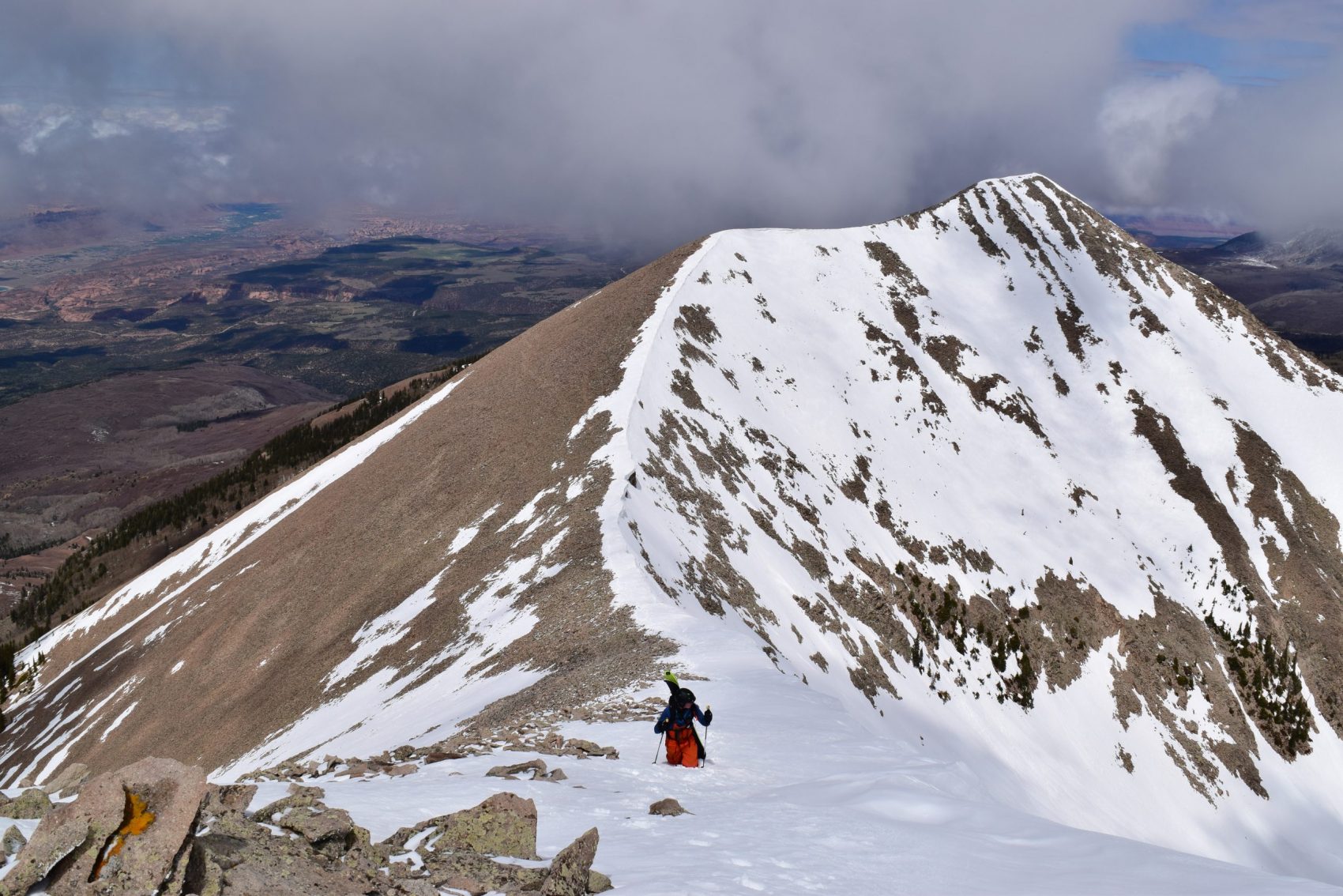 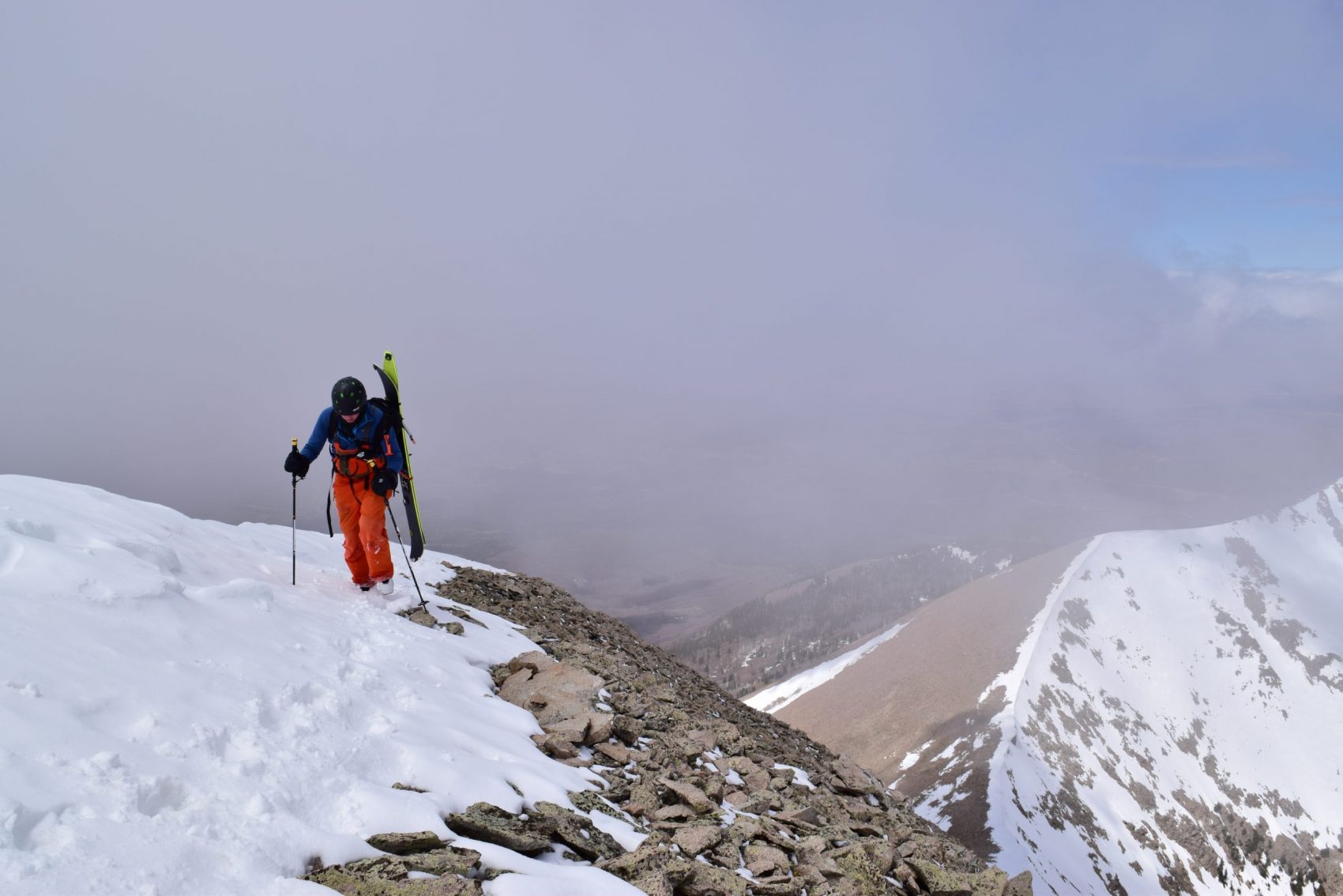 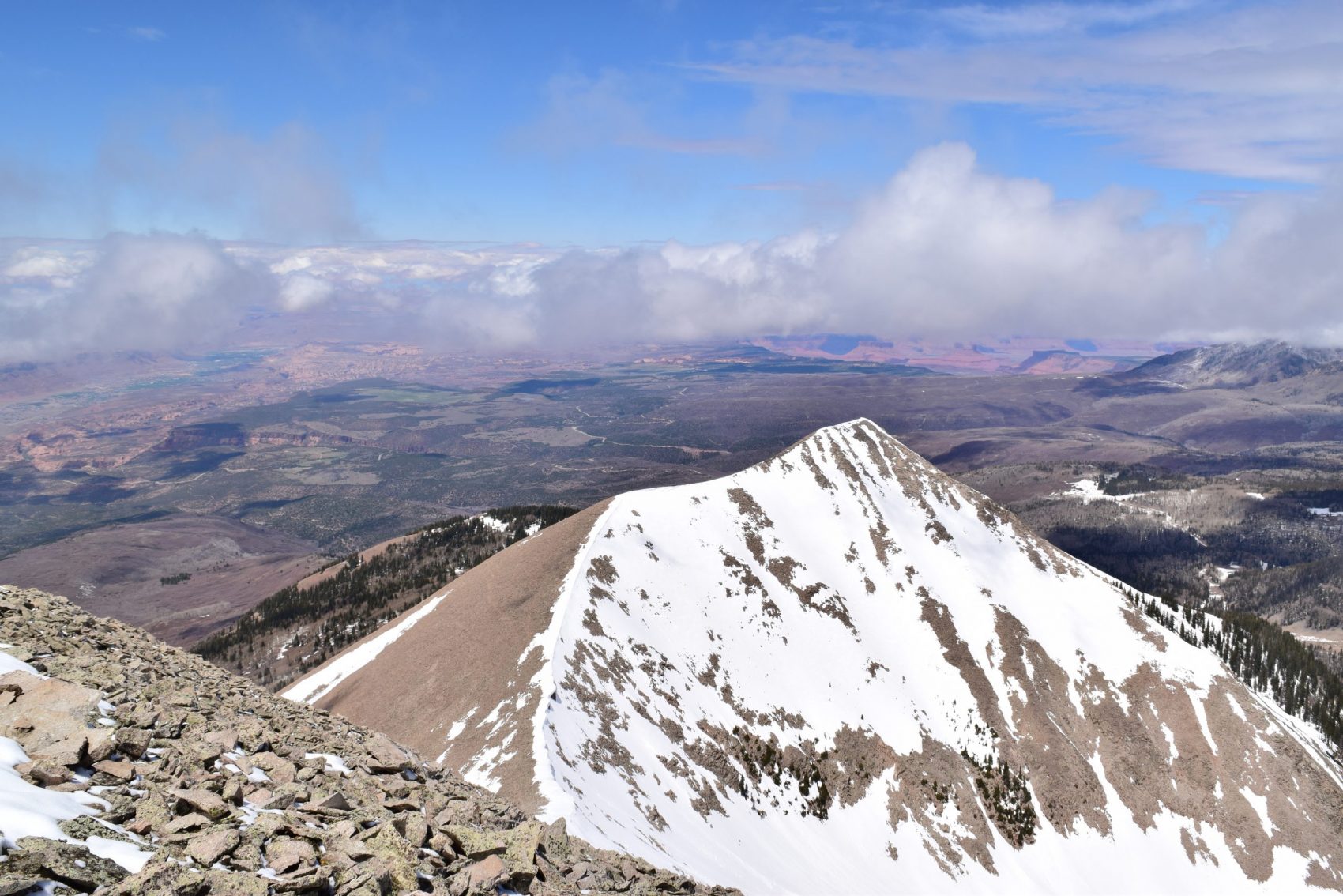 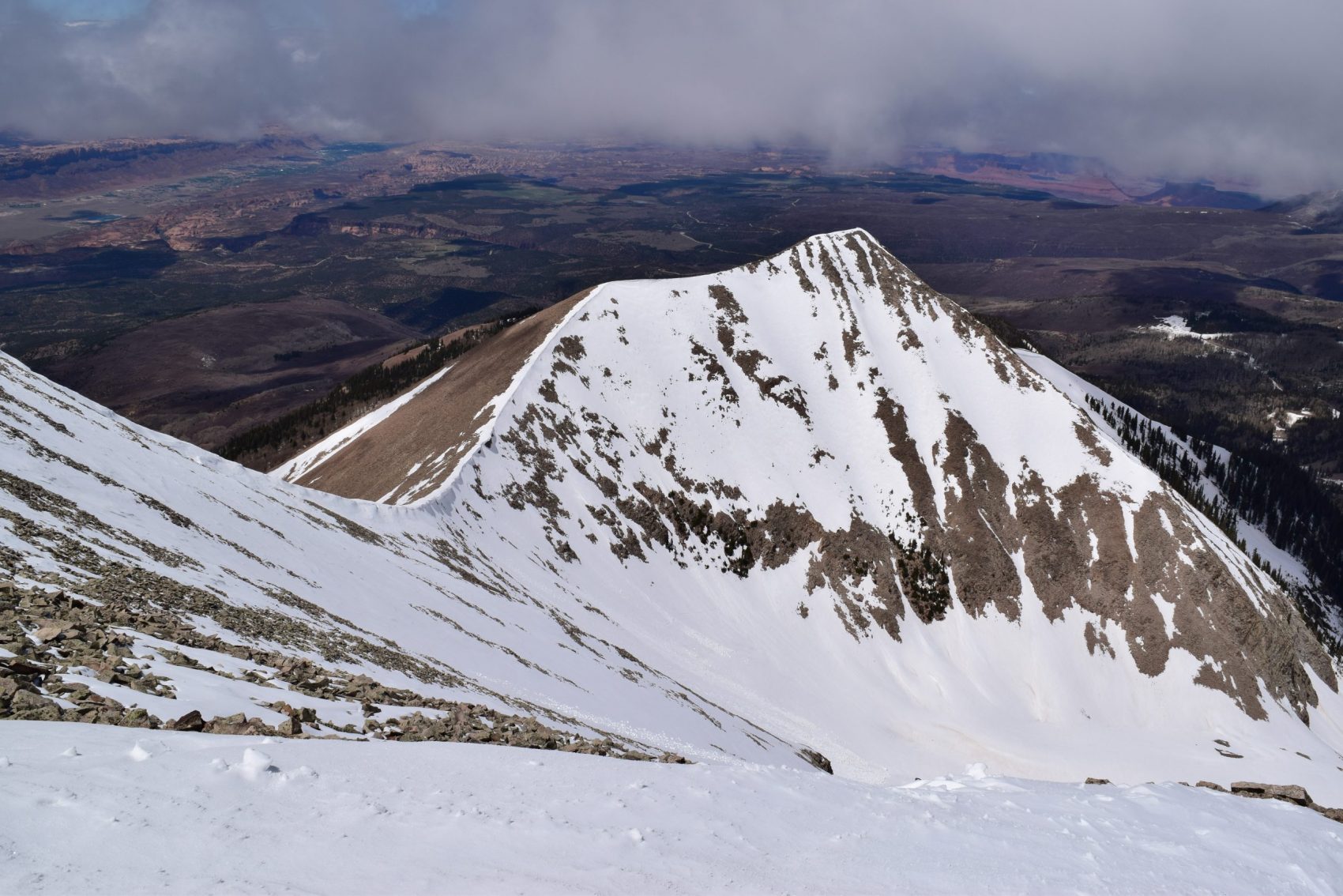 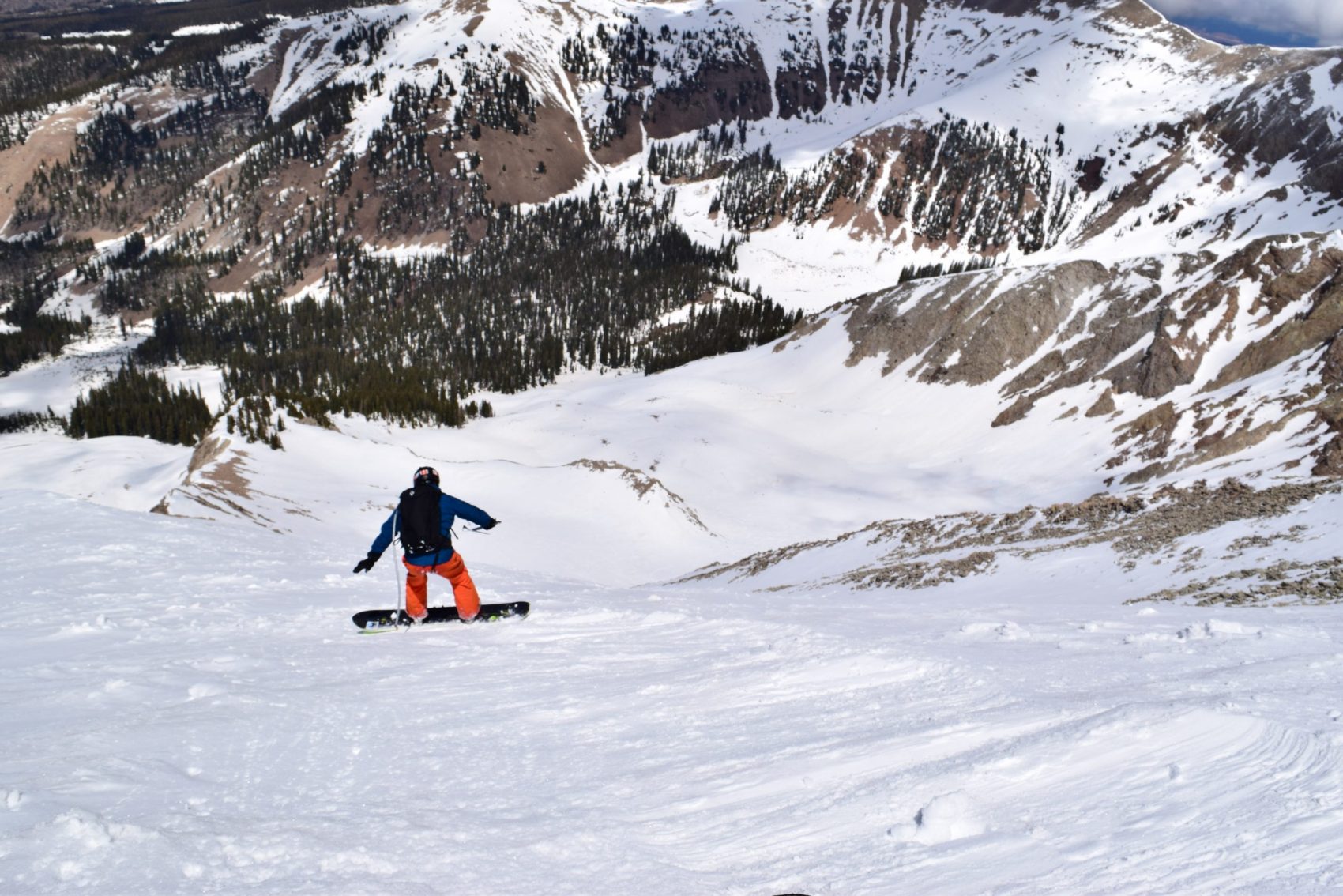 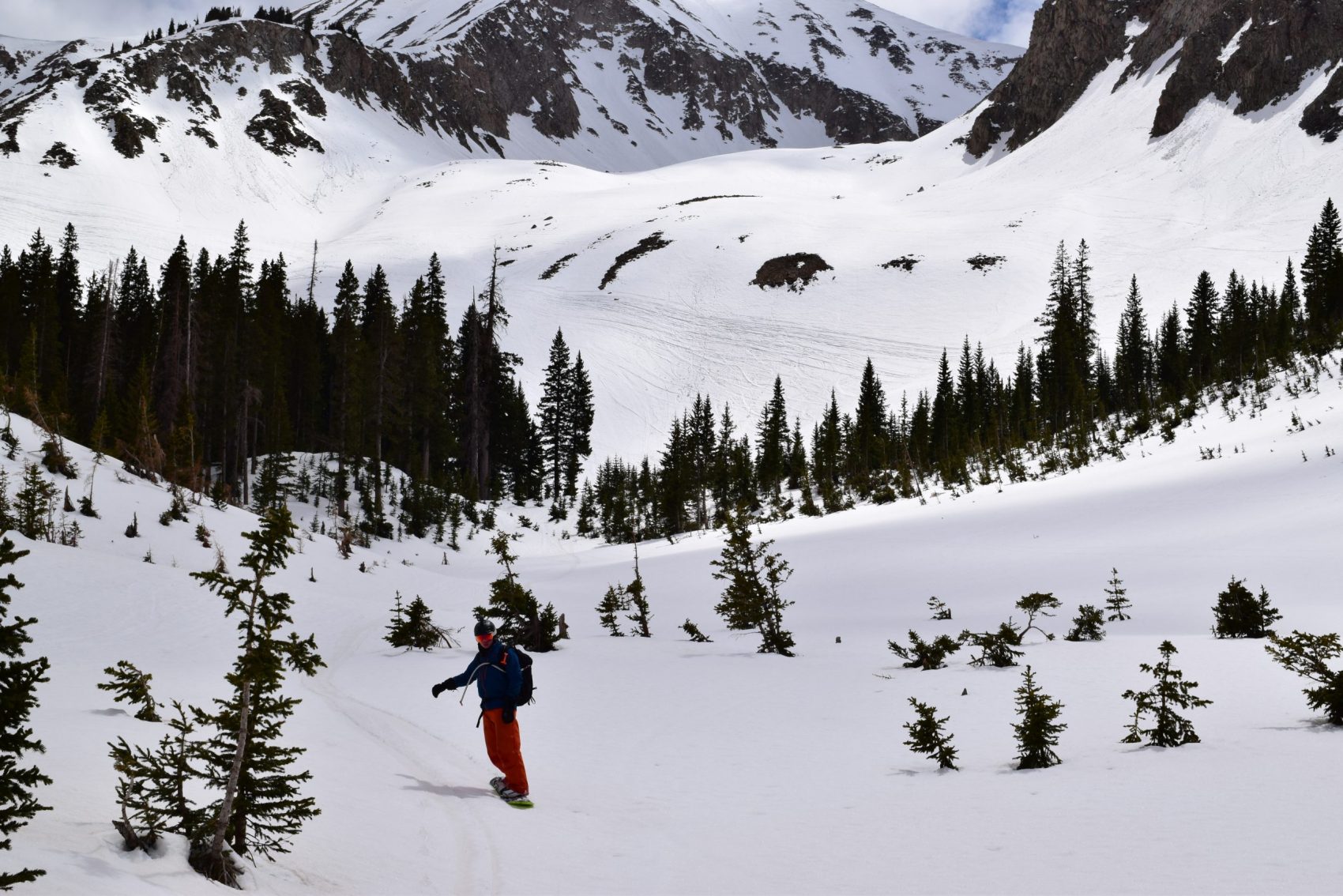 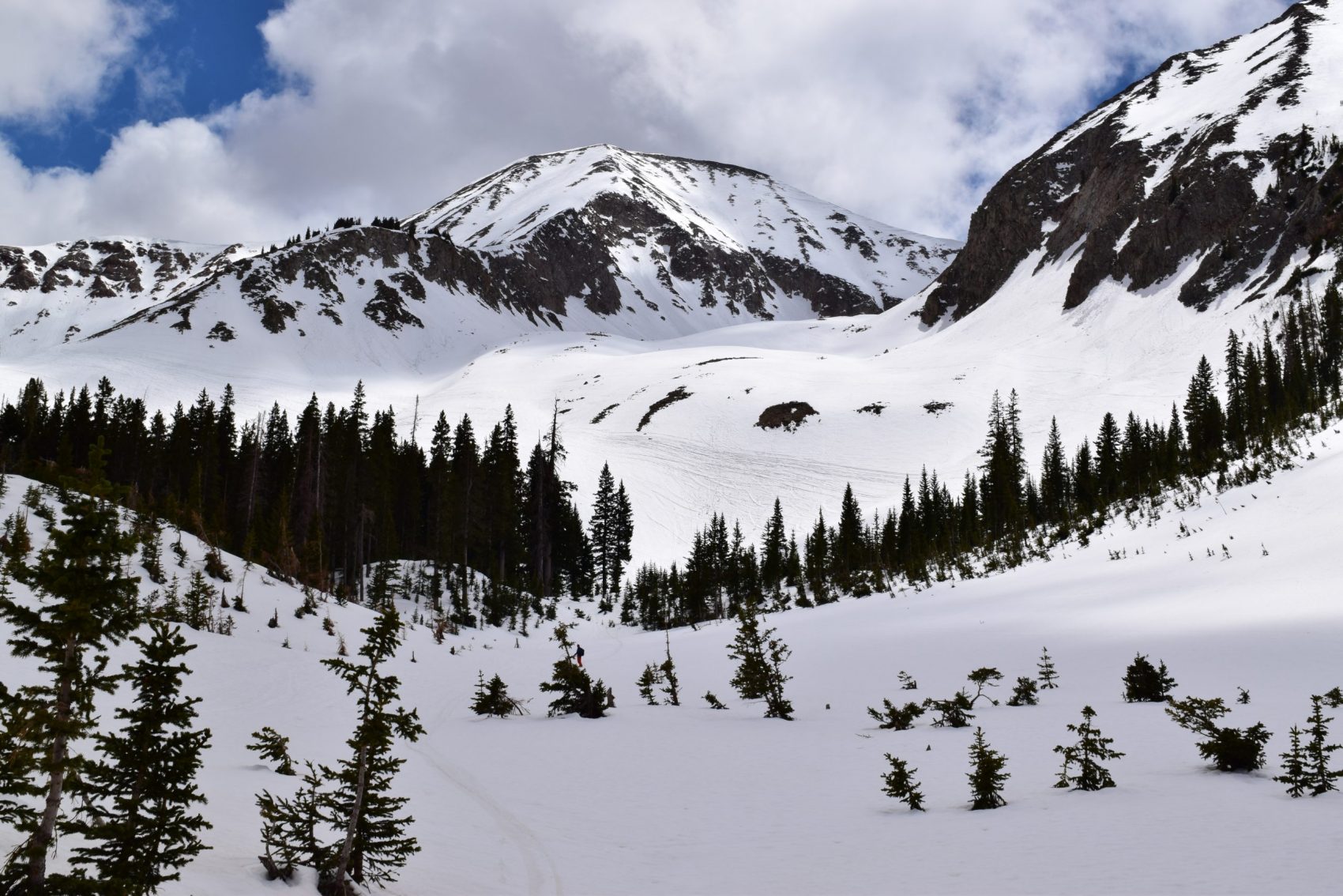