On June 9, we woke up to about 6 inches of freshly fallen snow in Snowmass Village, CO. I checked the weather, which indicated closer to 2 feet of fresh powder up top. 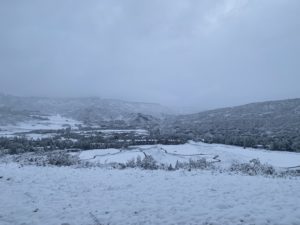 We started driving at about 7 am and got to the Lost Man Lake Trailhead on the final CO82 hairpin before Independence Pass at about 8:00 am. The fresh snow had brought the snowline down to almost the road, so we decided to ditch the hiking boots and hike in our ski boots with our skis in an A-frame carry on our packs.

The trail began as dirt, and we darted our way across a small stream to move up to the snow. After about 30 minutes of hiking, we reached consistent snow, and we put on our skis and began skinning. We had to cross the Roaring Fork river, which proved to be a challenge, considering that it was too deep and strong to wade through, so the only crossing was above a snow bridge that we didn’t know how strong it was. We crossed one at a time to minimize danger, and fortunately never punched through.

We continued skinning up, basically following the Lost Man Loop trail, although it was completely buried by snow. We passed Independence Lake and began the real climb up to the East Geissler Saddle. The hill was about 30 degrees, but we were mostly sidehill skinning. The soft snow on top of the icy interface below meant that our skis were slipping every couple of steps. We decided to put on our ski crampons, which helped significantly by digging into the icy layer beneath, giving us some purchase and preventing the slipping.

At the saddle, we were met with 40MPH winds, which almost instantly turned us back. We sat beneath the ridge to protect us from the wind and rethought our plan. The original plan was to ski East Geissler’s northeast face down to Lost Man Lake, then gain the saddle and drop back down to the road. However, with the winds roaring over the ridge, we decided not to get on the windward side of the peak. We skinned back to the west across the face and ascended East Geissler’s southern face almost to the summit, where we stopped early to avoid wind and hunkered behind a boulder to transition.

We skied about 1000′ of great powder turns, so good you might think it was mid-February Colorado skiing! After we finished skiing the southern face, we traversed to the west down to another little chute that allowed us to ski almost to the car. We put our skis back on our packs and hiked the final 15 minutes to the car. Here’s a video from our descent: