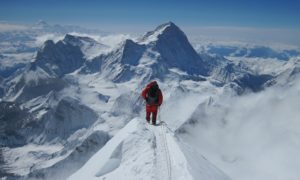 On top of the world! Credit: Sports Radio Knoxville

HAPE is not a joke.

High Altitude Pulmonary Edema or HAPE is one of the leading causes of death among mountaineers and high altitude skiers and snowboarders. HAPE is a disease in which the lower air pressure at high altitudes causes one’s lungs to become filled with fluids. It can occur when ascending to an altitude as low as 2500 meters or 8200 ft! This isn’t a condition that is exclusive to out of reach places like the Himalaya. It’s something every mountain enthusiast should have on their radar.

One such example is the death of Susanna Deforest. Susanna was a Pennsylvania native who embarked on a backpacking trip in Aspen, Colorado. The plan was to hike up to Conundrum hot springs to spend the night and enjoy an awesome trip with her friends. The trip requires an ascent from 8,765 ft to 11,222 ft which is around 2,500 feet of elevation gain. She felt sluggish on the way up but had not shown any other symptoms. She was not breathing hard, nor was she coughing. There was seemingly no cause for alarm. Tragically, her friends found her dead the next morning at an elevation of 10,623 ft. The cause of death was determined to be HAPE. This was an extreme case of the disease, but it is a great example of how sinister it can be.

If time is taken to properly acclimatize to higher and higher elevations, the risk is easily mitigated. It is best to introduce more exposure to altitude in a slow, incremental fashion in order to give the body time to get used to it. Don’t exert too much energy! chill out and take it easy. Climbers on Mt. Everest will often climb up to a higher base camp to expose to altitude and then come back down to sleep. Pushing a little higher every day until they’ve reached the summit.

2. Recognize the symptoms and go down.

The single best way to avoid HAPE is to stop it before it happens! As we saw in the unfortunate Susanna Deforest tragedy, it can be hard to spot the symptoms. It is extremely important to be very aware of the risk and to make smart decisions. The symptoms include headaches, (usually the first symptom) coughing, shortness of breath, fatigue, difficulty walking uphill that progresses to difficulty walking on flats, coughing that produces foaming as well as blood from the mouth, and chest pains. Be acutely aware of yourself and your partners and if someone doesn’t feel good, go down! It can be hard to do when the summit is within reach, but remember, the mountain isn’t going anywhere!

Drink a lot of water! It’s very important to stay hydrated at elevation to replace the fluids lost in physical exertion getting up there. Electrolyte tablets are awesome and they work wonders! Avoid drinking alcohol because it impacts the oxygen levels in the body, dehydrates, and therefore can add additional risk. It is best to avoid alcohol consumption for 24-48 hours after reaching altitude.

4. Grab some medication and additional oxygen.

Drugs such as Nifedipine, and while not as effect, Sildenafil or Viagra (ha!) can be used as preventative measures. Supplemental oxygen is also very effective for treating and preventing HAPE. Containers of oxygen can usually be found in gift shops or mountaineering stores in high altitude areas such as Grand Teton National Park or online. It’s not a bad idea to throw one in the kit!