The National Ski Patrol (NSP) bids farewell to CEO Chris Castilian, who resigned in August citing differences of perspective and in leadership not willing to adapt the organization’s priorities to stay relevant in a dynamic industry. Castilian’s full resignation (see below) and NSP’s official response both touch on long-time critiques of the venerable organization. The National Ski Patrol is a volunteer-run ski rescue non-profit founded in 1934, parallel with the rise of the ski industry itself. Today, the organization has more than 30,000 members across 650 resorts who are dedicated to serving the ski community as educators and emergency responders. 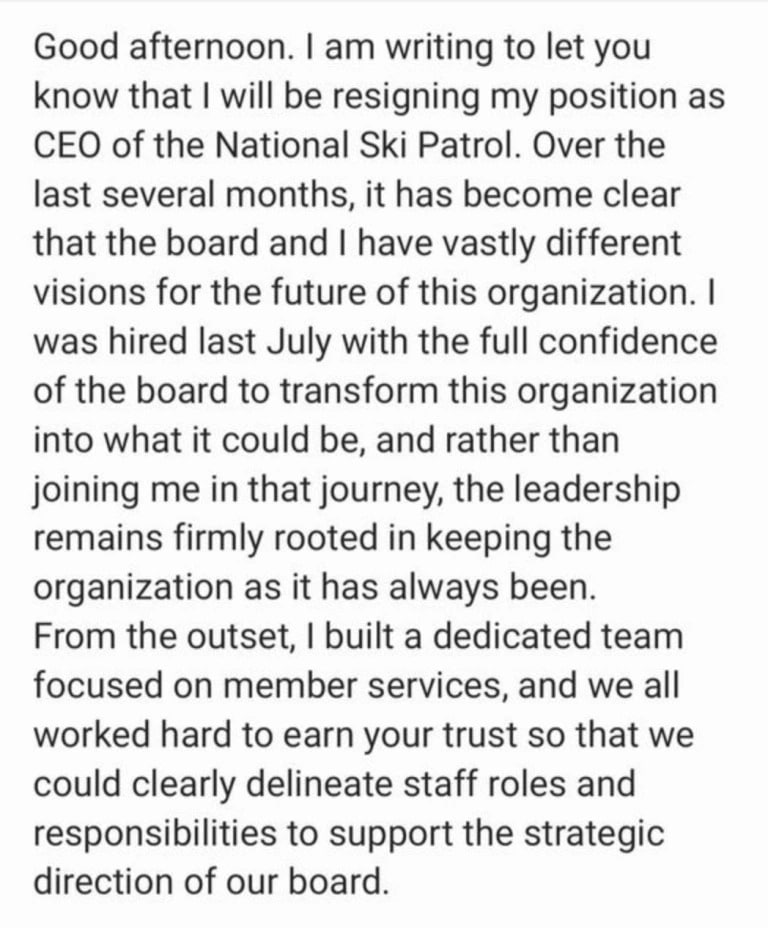 While the National Ski Patrol has a long history, its future has come into question as the organization sees the exit of its third CEO in only five years and has faced concern that the high turnover of executive staff is indicative of larger, more systemic issues. Castilian served as CEO for just thirteen months, following Meegan Moszynski from 2017 to 2020, and John McMahon served three years before quitting in 2017. Moszynski’s term came to an abrupt end after she criticized then-board chairman Brian Rull’s racist and inappropriate comments in Ski Patrol Magazine.

Publicly, Moszynski and NSP mutually agreed to go separate ways, but internal sources reported that her termination was in direct relation to her criticism of Rull’s comments. “I went through the exact same thing Chris went through. So did Meegan,” McMahon commented. “So the board had had three executive directors in a row calling for a change to NSP governance and three times now they have failed to act.” Even in 2014 a lot of these issues were exposed in an article in Ski Area Management magazine, but now in 2022 many feel these complaints remain unresolved.

As the National Ski Patrol fights to stay relevant as a premier education and response network within the ski industry, executives and members are once again asking NSP to grow and adapt. One common critique claims the NSP internal medical certification (Outdoor Emergency Care) doesn’t keep up with more advanced EMS standards, but a larger issue where members are calling for concrete action is promoting diversity, equity, and inclusion among patrols. The call to celebrate equity is not inherently controversial, but only about half of the organization’s members agree this is a priority and the other half are accused of being stuck in the past.

To address these concerns, NSP hired The Equity Project to study the organization’s operations who delivered 26 pages outlining member experiences and calling for an overhaul of how leadership trains for and responds to these instances. Personal stories surfaced on social media of female and minority patrollers being harassed by colleagues, management refusing to hold people accountable for creating a toxic workplace, and even threats of physical retaliation against members who are vocal about change. The report delivered by the Equity Project was presented to NSP leadership, but the board declined to release it to the public and members are still waiting to see its findings applied to their local patrols.

Castilian’s departure creates an opportunity for the National Ski Patrol to choose a new path and executive that best supports the mission and future of the organization. The entire industry relies on the heroes of local patrols who help our loved ones during the scariest moments of the sport, so it’s important to create a sense of continuity and leadership among the outdoor emergency community.

This is an organization born from the noble “Minnie” Dole and honored 10th Mountain Division, so naturally, most patrollers are here to serve the public in the most extreme conditions regardless of what’s happening in the national office. However, when a patroller is dispatched to a high-speed collision with a tree, it’s in everyone’s best interest for that patroller to be trained to top medical standards, the latest low-angle rescue techniques, and works in an experienced and supportive community with strong leadership. Best of luck to this staple of the industry as they begin yet another hunt for sound, unifying leadership this winter.