In the video above, the Utah Avalanche Center assess the snowpack at the site of the tragic avalanche that took the life of a 31-year old snowboarder just outside the Park City, UT ski area boundary.

Today, our team visited the recent avalanche accident in Dutch Draw. We are compiling a report and it will be available on our homepage soon.
In the meantime, know that we have a similar backcountry snowpack structure across northern Utah and it’s deceptively dangerous.
Know matter how you plan to recreate in the mountains, please check-in for the latest updates in your zone at www.utahavalanchecenter.org

The persistent weak layer isn’t healing anytime soon, and backcountry adventurers should tone their slope angles down, and play around on low angle terrain.

The full report from UAC:

A 31-year-old male snowboarder from Clinton, Utah, was killed in an avalanche in Dutch Draw area off of Silver Peak. The snowboarder was riding with a skier, and neither of them was carrying any avalanche rescue gear. The pair was riding in the Canyons Village area of the Park City Mountain Resort, where they took four chair lift rides, ultimately bringing them to the top of the 9990 chairlift around 9:40 a.m. They hiked a short distance to access the Dutch Draw area at the top of the chairlift via the backcountry exit gate. From this gate, they left the ski area boundary, entered into the backcountry, and followed a ridgeline to the top of Silver Peak.

The skier who was not caught in the avalanche called 911 at 10:09 a.m. and 911 dispatch notified PCMR patrol, who then requested air support. In addition to the skier, there was a party of two and a party of one who had been riding in the area. Helicopters from the Utah Department of Public Safety (DPS) and AirMed responded. A helicopter from Lifeflight was also in the air and available if needed. The skier was transported from the scene via the DPS helicopter, and the other three people left on foot. Once the scene was clear, explosives were dropped from the DPS helicopter and triggered one avalanche to the looker’s right of the original avalanche.

Following the explosive work to make the scene safe from additional avalanches, rescue personnel from Summit County Search and Rescue, Park City Mountain Ski Patrol, the Park City Fire District, and Wasatch Backcountry Rescue arrived on the scene. An initial search was done with avalanche transceivers and a RECCO detector, but the snowboarder was found with an avalanche rescue dog. He was buried 2 feet deep and dug out of the debris at 2:30 p.m. His snowboard was still attached to one foot while his other foot had been pulled out of his boot. No obvious signs of significant trauma were reported.

The Park City Ski Patrol searched the debris for signs of any additional burials using avalanche transceivers, a RECCO detector, and the dog team. Witness accounts and the number of tracks on the slope also helped confirm there was only one burial.

The Dutch Draw slope has been the scene of fatal avalanches in December 2019, February 2012, and January 2005.

The initial open slope of the ridge is about 30-32 degrees in steepness. It would appear to be relatively benign terrain to an advanced skier or snowboarder. Following a blind rollover, a short distance from the summit, the slope steepens to 38-40 degrees where the avalanche crown was located.

The short video from December 2019 below shows the backcountry gate’s view at the top of the 9990 chairlift, where you exit the ski resort boundary and enter the backcountry.

On the day of the accident, skies were partly cloudy, winds were generally light and westerly, and temperatures were in the mid-20s F.

A look at the weather the 30 days leading up to the accident:

We dug a snowpit on a safe representative slope nearby and found a snowpack structure that has been seen widespread across the Park City Ridgeline. The layers shown in our snowpit profile were similar to the ones in the crown of the avalanche.

The layer of concern is a varying thickness layer of facets sitting on top of a melt-freeze crust that likely formed during the end of November and the beginning of December. This facet crust interface has been seen widespread across the Park City Ridgeline. The avalanche failed within the weak facets sitting atop the supportable melt-freeze crust. The avalanche initially failed mid-slab in some places, stepping down to the melt-freeze crust, but did not step all the way into the facets at the ground in any places on the crown or slide path.

On the day of the accident, the avalanche danger was rated CONSIDERABLE on the slope where this avalanche occurred. Friday’s avalanche forecast is available HERE.

Our deepest condolences go out to the friends, family, rescuers, and everyone affected by this tragic accident. 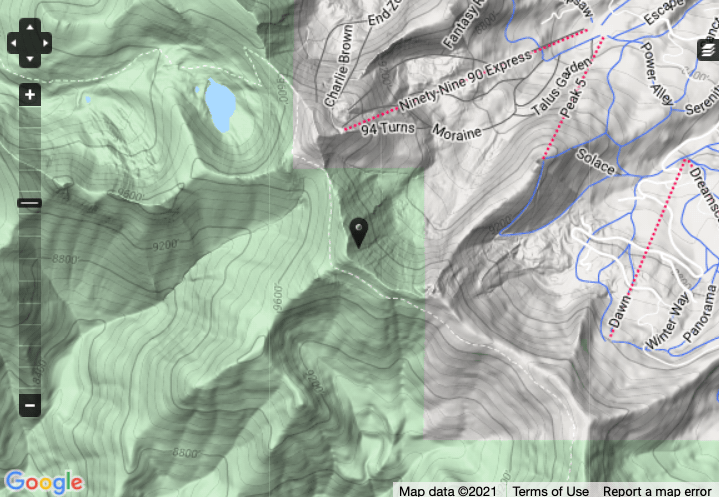