A Skier near Golan heights caught amazing video of a missile launch on his helmet cam. The missile was fired by Iranian forces in Syria, following an ongoing struggle in the region.

The video was taken in the Hermon resort in an Israeli-controlled portion of Golan Heights. The resort quickly closed Monday concerning the attacks but reopened Tuesday. Intelligence Minister Israel Katz believes that the Ski Resort was the target for the airstrikes. However, other intelligence points to many other potential civilian or military targets in the region. 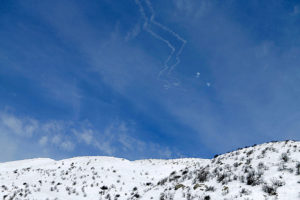 Israeli forces intercepted the missile before it hit the intended target in Golan. The following day, airstrikes were launched by Israeli military forces in response to the failed strike. Russias defense control system confirmed 4 Syrians were killed in the retaliation.

It looks like Hermon Resort is now safe to ski for the time being.