In ski manufacturing, it pays to keep an eye for the “little guy.” Those dedicated craftsman & woman represent the root of their industry, work to a personalized scale, and likely produce game-changing gear.

SEGO SKI CO, born in the bosom of little Victor, Idaho is one such artisan firm. And they’re carving deep tracks upon the world’s biggest winter stages, North Pole included.

If SEGO formed like Voltron, the head would be the brothers Wells; two outside-the-box siblings with a vision to create planks as experience-driven as the ski day itself. Better still, Peter and Tim Wells had the foresight (as well as good fortune) to cultivate a team that, collectively, turned their early vision into today’s ripper pair of SEGO skis.

SnowBrains paid a visit to the shiny new fun-factory where these skis are produced to find the SEGO familia assembled, and hard at work, but never too busy to roll out the welcome mat which, at the end of the day, is a cornerstone of a truly epic experience.

“Moving to Teton Valley, my brother and I had a clear vision of what we wanted,” Tim Wells, co-founder and CEO of SEGO tilts a beer while surveying the busy shop floor beyond. “It was(and is) a lot of building,” he said, “a lot of wins and a lot of losses too, but we’re finally hitting our stride; figuring what really works and delivering it direct by developing relationships with the customers themselves.”

Inspired, designed, and manufactured among the awesome natural architecture of the Tetons Mountains, each SEGO model is proof of the possibilities in sustainable, affordable, community-conscious skiing. And it doesn’t hurt that SEGO’s quality control center is the staggering terrain waiting just outside the factory door. The ‘turf’ this company calls home practically inspired the phrase, ‘Hell Yeah!’ And that focused enthusiasm echoes to the core of the company.

“It’s a magic mix, one that combines an artist’s attention to detail with a manufacturer’s work ethic for repetition.” These words roll from behind the beard of Ronald A. Murray Jr, SEGO’s lead when it comes to Technician of equipment, Production… and Introspection.

Ron moves amongst the machines of the shop floor with accustomed patience and a practiced hand which is rivaled only by his ear—the guy’s playlists are killer.

“In SEGO’s case, the magic is parts refined design and incorporating top-shelf everything to construct a quality ski–by hand–with only a few people.”

Ron’s words are bold. But the proof is in the product. SEGO athletes, for example, represent the breadth of the ski experience. And they’ve had ample time to test the crystalline waters.

“A few years back, I tried SEGO at an Alta demo,” said Clare Chapman, lady skier for the SEGO hit squad, “I immediately fell in love with the way that it skied.”

Between her ‘Ski the East’ root and her current SLC residence, Clare’s seen more of shred culture than her 24 years might suggest. She trusts SEGO to value people––and skiing—whatever the conditions.

“I’m on the Big Horn. I trust them off cliffs, in fresh pow, in chopped-up crud, and everything in between. And on top of having loved their skis from the beginning, SEGO speaks to one of my favorite aspects of skiing: giving off strong vibes of fun, family, and embracing community,” Clare said.

What Clare is talking about is a downhill line-dance between snow, gravity, and people—on what SEGO SKI CO. intends to be the industry’s longest-living product. It’s a goal that likely has no ‘endpoint’ yet the company strives for it in every step (or steep) along the journey.

Sourcing materials to meet the highest possible standard, each and every ski manufactured by SEGO is a 100% in-house labor of love.

Think indestruct-o sidewalls constructed using ultra-high molecular weight polyethylene, vertical lamination, acclaimed ‘freeride base structure pattern.’ and tip-to-tail poplar core. This crew even takes care to follow techniques in waste reduction—and they’re seeing results. Not only is the SEGO SKI brand on the major come-up, but its scrap footprint is reduced to a minimum. In fact, it’s likely that the deepest trace a SEGO SKI leaves is the track trailing those wise enough to ski ‘em.

“I guess where it starts is simply going fast downhill on skis—I mean, that’s not a scenario where you’re having a bad time.” Peter Wells enters the conversation in a congenial cloud of sawdust and rumination. As Founder, Designer, and Production Lead at SEGO, Peter—like his brother Tim, is joyfully immersed in his work and happy to share it.

“We’re working in the minutia of details just trying to find how to make going fast downhill more fun,” he said.

Central to the shaping process is the notion of creative progression—daydream, tinker, and (of course) keep it fun.

“We’re big on inspiration,” Peter said. “What are we doing now, what ideas do we have; what are our peers doing?”

“It’s so important (& awesome) to get out and test, take notes, and then bring all that back to design.”

The Big Horn ski, specifically, balances an obliging soft, nearly-symmetrical tip/tail with bow-taunt power that strengthens toward the Underfoot, and all in a delightfully lightweight package. Among the SEGO cadre, Big Horns are playful—bordering on mischievous—but best believe they snap to when it’s time to rock.

Lean into it like you mean it, and the Big Horn turns on a knife-sharp dime. Find yourself reclined in the fat, floaty deep and their poplar core responds with the support of a bucket seat. The Big Horn’s reduced weight and versatile profile add extra spice to any given sequence as a matter of course. If it’s bumps, you’ll likely find yourself airing them. If it’s a straight, then that line begins and ends ‘tips down.’ Even noodling the beginner’s slope with your micro-shred next-of-kin evolves naturally into butters and hijinks, switch. 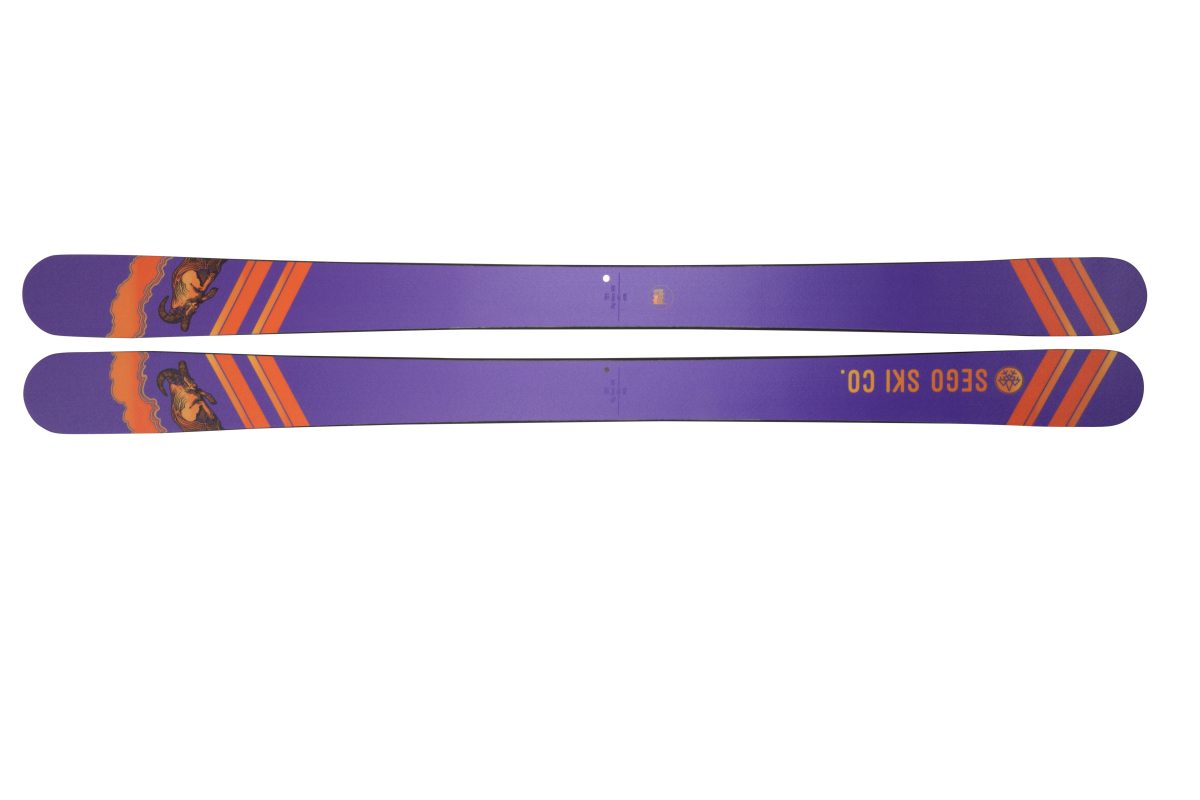 Grabbin’ It By The Big Horns:

“Big Horn is an athlete-driven ski,” Peter said. “It balances customization of what’s working for our athletes yet making it relatable and functional for your skiing public—which usually doesn’t take away from that top end of it.”

“Its evolution then has produced a quiver-killer ski that’s easy to edge, really fun in the air, and a natural fit for the aggressive or relaxed ski style,” he said. “They’re kinda just a choose-your-own-adventure ski.”

Skiers have quickly clue-in to this la carte SEGO plank. The Big Horn is the best-selling model in the company stable, the ski that according to SEGO’s market spin doctor, Abbot Gilbane was a “game-changer” for the delightfully disruptive ski manufacturers at Victor, Idaho.

Perhaps most telling of all is how things are just getting started at SEGO SKI CO. Even as I type, this company with the best of rascally intentions is occupying and outfitting a new, up-sized, all-in-one facility—and just in time. Among the largest challenges in the process of unpacking boxes is to fill all the orders—they’re pouring in. But what do you expect for the company that put the planks to the boots of a Freeride World Tour champion?

That monumental achievement, by skier Isaac Freeland, is a pinnacle moment for furthering SEGO’s quest for fun, experience-driven skiing. And the sky’s the limit to where things could go from here, it’s said that even Saint Nick is rocking a pair this season. Yet as cozy as the proverbial limelight maybe, what would really please SEGO SKI CO is to carve a line-or-two this Christmas with that jolly old elf–and you.