Daily low-temperature records are being broken in the western half of the US as states from Michigan to California are already experiencing wintry weather – and it’s still only mid-October. Meteorologist Ryan Maue tweeted on Monday that record low temperatures are covering the map with a major cold front blasting through the Rockies to the Mississippi River, with winter weather as far south as the Rio Grande River

Across the west, temperatures plummeted Sunday evening and snow began to fall. A cold front generated unseasonably early snow across the Rockies and High Plains, Southern Colorado saw its first cold blast of the season, according to the National Weather Service (NWS).

Montana received snow on Friday, while Wyoming, South Dakota, Nebraska, and Colorado saw snow on Saturday. New Mexico, Minnesota, and Iowa are also part of the wave of cold weather 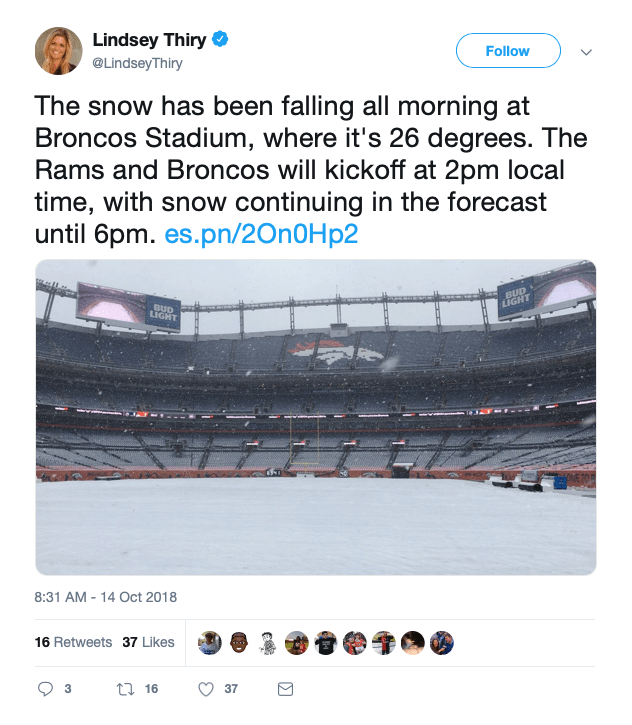 A bit of a shock for the LA Rams! Credit: Lindsey Thiry

In Colorado, a more than 40-degree drop in temperature and winter snow conditions across the Front Range came as a surprise for some, who were simply not yet ready to let go of fall season. The Boulder area got snow, about 7 inches, and Allenspark, just northwest of Boulder, got more than 11 inches of snow. And hours before the Denver Broncos were set to face the Los Angeles Rams on Sunday afternoon, the Broncos’ stadium had filled up with several inches of snow, CBS Sports reported.

In Montana, Wyoming and South Dakota, as many as six to 12 inches of snow reportedly piled up, prompting interstate closures. The Sangre de Cristo Mountains, the Wet Mountains, and Pikes Peak may receive 16 inches. The cold is expected to dip to the Gulf states by Tuesday, according to weather.com.

Fall quickly descended upon Texas Sunday and Monday, bringing drastic temperature drops, record lows, heavy rain, and even snow. The cold front’s path through the state was speedy, but it didn’t hit the whole state at once. Cities in the panhandle and North Texas were showing 30-degree temperatures Sunday while San Antonio, Houston, and other southern cities maintained their summery 70-90 degree temperatures, the National Weather Service said.

By Monday morning, even most of the South Texas cities reported 40-degree-plus temperature dips. Corpus Christi experienced a 14-degree drop in just two minutes. In the north part of the state, temperatures continued to drop. Multiple cities hit their first fall freezes, some warned of possible ice on highways, and Amarillo received snow, the weather service added.