A series of storms will bring 2-5 FEET of snow over the western US this week, primarily in the Pacific NW.

A longwave troughing pattern will remain in place over the US west coast, streaming moisture into the region.

The highest amounts of snow expected are in the Pacific NW, with interior ranges in the west fairing well.

The first in a series of storms will move into the western US today, bringing 8-12″ of snow to the Washington Cascades through Monday.

As this storm continues to move in from the Pacific, it will bring snow to the Sierra’s, Oregon Cascades, and Northern Rockies through Wednesday.

Colorado and Utah will remain mostly dry during this time period.

The pattern will continue to stay active through the long-term for the Pacific NW and Northern Rockies, with an additional 1-2 FEET of snow for these two areas.

The Sierra’s look to stay pretty dry during the long-term, with maybe an inch or so in some places.

Colorado and Utah will get in on the action during this time as the ridge of high pressure over the two states moves to the east.

Amounts are still uncertain at this time as models are differing quite a bit in snowfall amounts.

However, it does appear Colorado will see more snow than Utah.

Global ensembles indicate active weather is possible to continue over the west in the extended forecast period.

However, there is still a lot of disagreement if snowfall will be widespread across the western US.

One thing that seems to be likely is the Pacific NW will continue to see snow through the extended.

1-2 FEET of snow is expected across the Sierra’s, especially around Tahoe, through the short-term as the initial storm moves into the western US.

Conditions look to be relatively dry in the long-term as the storm track will shift back up to the Pacific NW.

Colorado will stay dry through the short-term forecast period as high pressure sits over the state.

Getting into the long-term forecast, things change as the ridge of high-pressure moves off to the east, allowing for moisture to enter the area.

Snowfall amounts at this time are uncertain as global models continue to differ in their outputs but at the minimum, 3-6″ of snow should be expected. 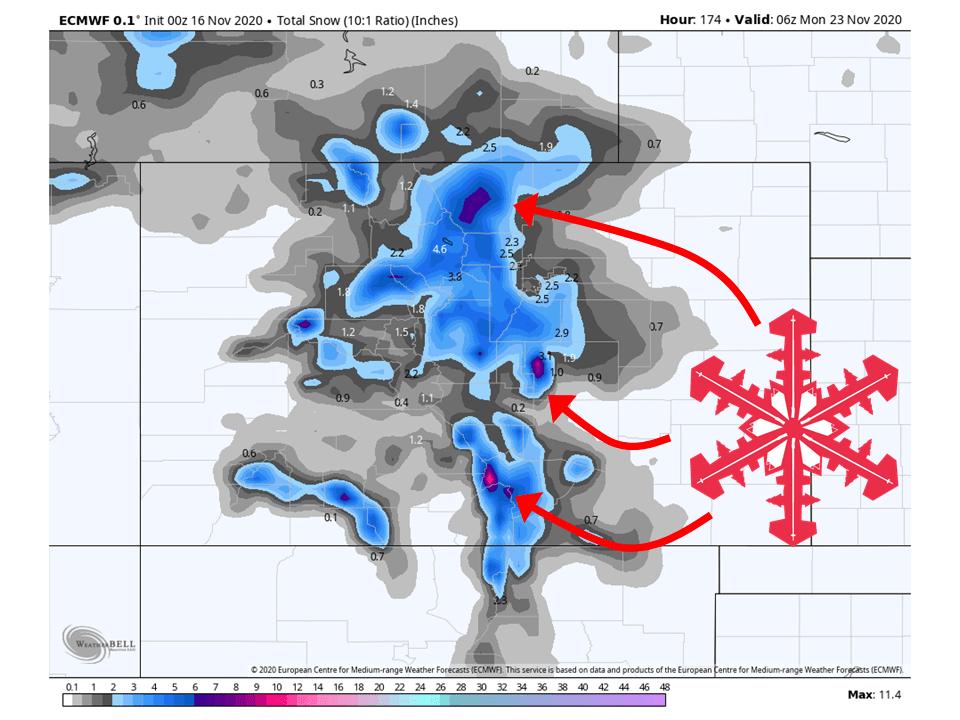 Like Colorado, Utah will stay dry through the short-term with a ridge of high pressure over the state.

Snowfall is expected to be less over Utah with less moisture transport into the area.

Because of this, only 2-6″ of snow is expected at this time.

The Northern Rockies look to do pretty well, with 12-18″ of snow likely falling through Wednesday along the Sawtooth and Salmon River Range.

Getting into the long-range, the Bitterroot, Teton, and Lewis Ranges will get their fair share as well, likely seeing 8-14″ of snow.

The Pacific Northwest looks to get the most snow over the next week, seeing 2-5 FEET of snow with the storm track staying north.

There will likely be localized higher amounts, especially along the Washington Cascades.

Global ensembles show that below-average temperatures and above-average precipitation are likely over the Western in the extended.

There is less confidence in whether or not this setup will move further inland.