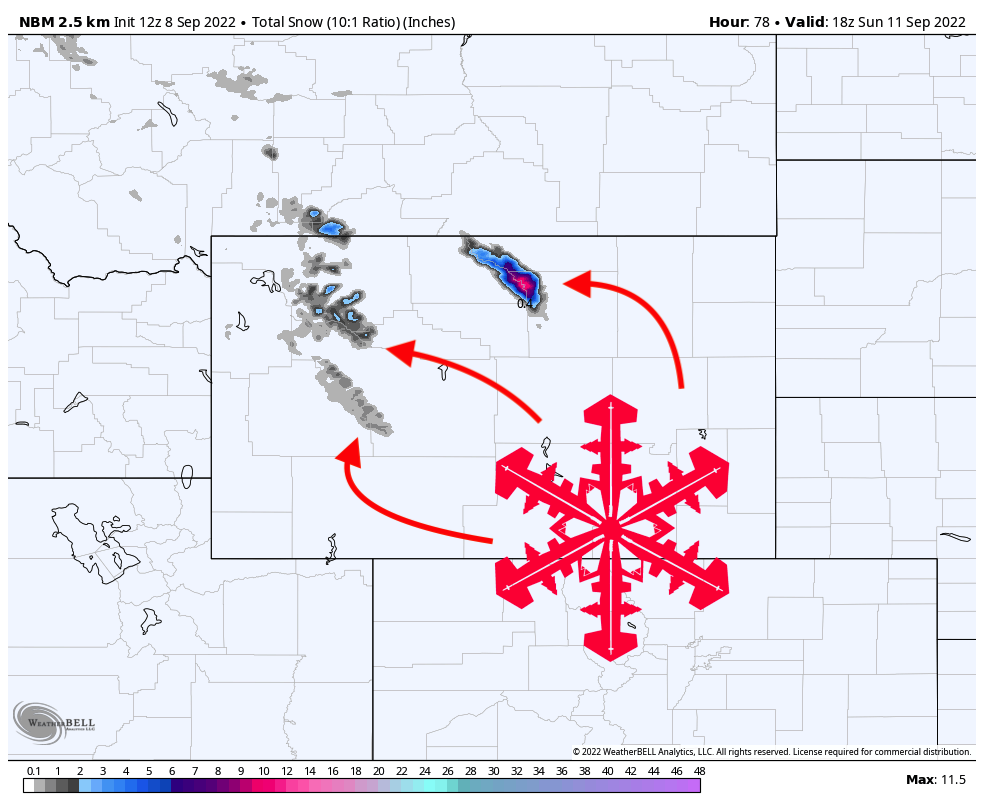 Snow forecast written by Clay Malott on Thursday, September 8th, 2022, at 9 am PST.

The first strong trough of the season will swing through the northern Continental United States this week, bringing the first significant snowfall of the season to the Rockies. The highest totals will be found in the Bighorn mountain range of central Wyoming. Snow levels should hover above 11-12,000 feet in the Wyoming ranges, 8-9,000 further north in the Montana Rockies, and as low as 7,000 feet at points during the storm in the Canadian Rockies of BC and Alberta. The highest totals should end up between 10 and 20 inches on the highest peaks of the Bighorn range and will drop off dramatically as elevation decreases.

Moderate snow showers will linger in the region at high elevations throughout Thursday. These storms will still be fueled significantly by convective upward motion, so the heavier precipitation won’t kick off until the early afternoon.

The moisture and instability will gradually move south and linger in the mountains of Wyoming until overnight between Friday and Saturday. After that, most of the snowfall will be done for the storm, save for a few small showers here and there.

How much snow will fall? Here’s a map from the best blend of models, the NBM:

Keep in mind this model is based on some low-resolution models to begin with, so it’s likely under-estimating snowfall in higher terrain where precipitation will be elevated. Temperatures will be cooler than the models have forecasted.

The models are in fairly poor agreement about totals. However, the highest elevations (above 12,500 feet) should see between 10-20 inches over the course of the storm, with the highest totals relegated to the Bighorn mountains of Wyoming. Accumulations north of Wyoming will be limited; temperatures will be more favorable, but there is not enough moisture and lift for significant precipitation. The upper elevations of the Tetons will see favorable temperatures for snow, but they will be too far West to receive nearly any precipitation, so they will only see a dusting at best.

Temperatures will rise back into the 40s and 50s over the weekend, so most of the snow will be melted by next week. However, this storm marks the first of a hopefully very snowy winter!