The up is never as fun as the down. The chairlift is just a means to get that next face shot or to continue the hunt for the perfect turn. No one ever talks about how insane the tram is as they’re about to crap themselves when they realize how psycho Corbet’s Couloir truly is. No. The magic of floating up a mountain is lost. It’s time we appreciate just how special this sport is that we can sit on our butts for half the time. This list names the chairs that have been cradling backsides the longest.

This lift services one of the three mountains in the country that bans snowboarding, and this lift is the reason for the ban. Mad River Glen was one of the first resorts to allow snowboarding in the 1980s but then banned snowboarders from the Single Chair only because of safety concerns while loading on the chair. according to Mad River Glen, a confrontation between the owner Betsey Pratt and some local riders led to snowboarders being banned entirely in the 1991-1992 season. You know a lift is legendary if it leads to an entire sport being banned from a mountain. 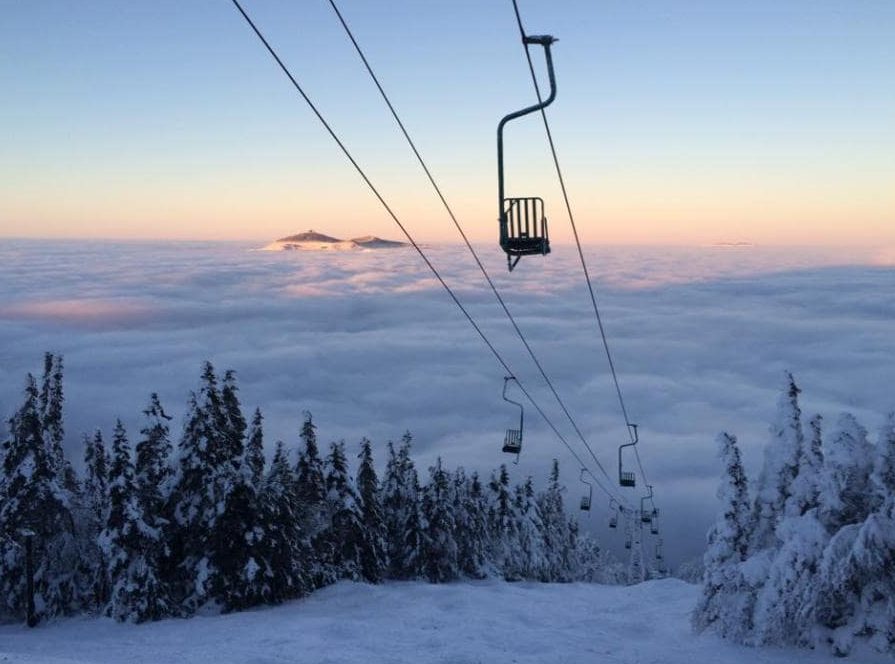 This Riblet style double services the advanced terrain near Lodge 1 at Mt. Spokane. Riblet refers to the way the lift attaches to the haul rope. It is attached to a clip inserted into the haul rope rather than a clamp that most chairlifts have today. Byron Christian Riblet founded the Riblet Tramway Company of Spokane, WA, in 1896 when he began building lifts in Nelson, BC, according to Riblet Tramway Company.

Finally, a surface lift! Costing a whopping $57,000, according to liftblog.com, it is the only lift at Sugarloaf that can open on windy days. Newenglandskihistory.com lists it at 960 vertical feet and that Leitner designed it. It’s over 60 years old, and it’s the most reliable—no school like the old school.

This double chair with a center pole is a classic in the Pacific Northwest. It only operates on weekends and holidays these days as it is adjacent to the detachable quad Great White Express. According to liftblog.com, this is a Riblet style double as well.

This is the lift that caused Kelly Canyon to black-list itself from the Riblet Tramway Company. Instead of buying a second lift from Riblet, Kelly Canyon decided to use this lift as a template and build a second lift for themselves. This didn’t sit well with the lift company, and they didn’t sell another lift to Kelly Canyon, according to liftblog.com.

This lift operates year-round and travels 2,292 vertical feet in 8 minutes. In the summer months, visitors can exit the gondola and walk to Sanson’s Peak. According to banffjaspercollection.com, Norman Sanson summited Sulpher Mountain every week for 30 years to check the weather until 1945, when he was 84 years old. In 1997, there were 40 new cabins installed, which were the third set of cabins, states liftblog.com.

Another Riblet double chair with that classic PNW center pole. If you’ve never ridden a chair like this, it takes some practice. These chairs stop the most on busy weekends as they can be intimidating for newer skiers and riders.

If you’re privileged enough to take one of these classics for a spin, pause to appreciate its grace as it thanklessly shuttles you off for another epic run.