A Manitoba woman was struck by a surprised black bear while out running with her dogs last Monday afternoon. The incident took place in Riding Mountain National Park, on the Moon Lake trail about 150 miles from Winnipeg, Manitoba.

She was out running with her 4 dogs just ahead of her, off-leash. Erin McKenzie was running a 6+ mile loop that she had done many times before the incident. The Moon Lake trail was closed following this incident by Parks Canada. Erin is an experienced hiker and backpacker, with over a decade of trails under her belt, including the Colorado Trail and many various trails throughout Canada.

Very suddenly the bear blindsided her at close range, coming out of dense vegetation. The bear swiped once catching her in the face, and again at her back before running away. The incident happened so quickly that her dogs did not even notice what had happened!

“I really thought I was going to die when the bear was hitting me. That was extremely terrifying. I’ve never been that close to a bear or any kind of predatory animal like that.”

After the attack, she called various family members to try and help her calm down, including her brother and mother. She walked the remaining 3+ miles back to the car while on the phone with her mother, just so mom knew she was going to make it. Her boyfriend met her at the trailhead and drove her to the hospital for care. 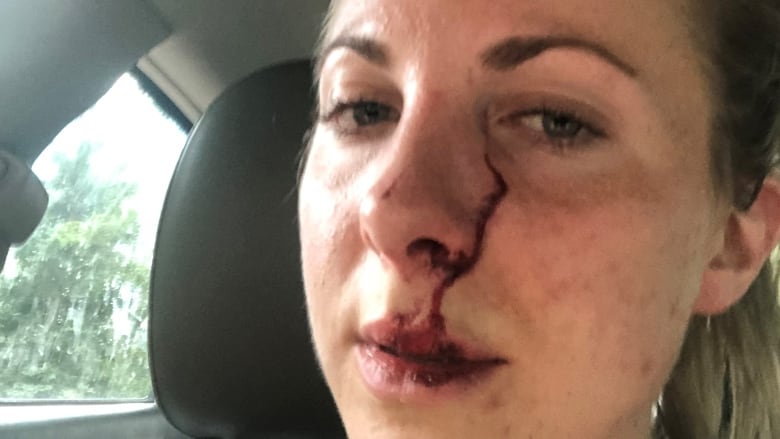 McKenzie shortly after the attack in need of care. Photo submitted by Erin Mckenzie CBC News

Besides an ugly looking scar, McKenzie says she is lucky to be alive. She is cautioning other hikers not to get complacent out on the trails as she had done. McKenzie made a video urging caution that I recommend watching, seen here. The number of human and bear interactions has been higher than normal this year, says Manitoba Conservation and Climate. Last week a sow bear was shot trying to enter a residence northeast of Winnipeg, leaving her 3 bear cubs orphaned. This story could have had a very different ending, thankfully McKenzie and her dogs are alive and well.

Riding Mountain National Park is a national park in Manitoba, Canada. The park is located within Treaty 2 Territory and sits atop the Manitoba Escarpment. Consisting of a protected area 2,969 km2 (1,146 sq mi), the forested parkland stands in sharp contrast to the surrounding prairie farmland. It was designated a national park because it protects three different ecosystems that converge in the area; grasslands, upland boreal, and eastern deciduous forests. It is most easily reached by Highway 10 which passes through the park. The south entrance is at the townsite of Wasagaming, which is the only commercial center within the park boundaries.

Colorado Native having spent a few years in Montana. An extreme snowboarder who enjoys rock climbing, fly fishing and mountain biking among other things. Lift Operations veteran of 9 winters at resorts such as Big Sky, Crested Butte, Telluride and Powderhorn.