Reaching Samnaun from the Swiss side is quite an adventure as the small town is nestled deep inside Austrian mountain ranges and only a small road, which was blasted in 1912 and has scary one-way tunnels, leads from the Engadine to this remote resort. Due to its remote location, the town was awarded a tax-free status by the Swiss federation in 1892 which lasts to this day. From Samnaun you can take a double-decker gondola to the top of the mountain and ski from there into Austria and from Austria you can ski on the “smuggler’s run” back into Switzerland. The ski area stretches across 150 miles (239km) of runs and is serviced by 41 lifts.

Portes du Soleil is the conglomeration of 12 ski resorts into what is now one of the largest ski areas in the world, stretching across a total of 373 miles (600km) of groomed runs serviced by 209 lifts. The ski resort has villages on both sides of the border, on the French side you have Avoriaz, Les Gets, Abondance, Montriond, St. Jean d’Aulps, La Chapelle Abondance, Morzine, and Châtel. On the Swiss side you got Morgins, Les Crosets, Champoussin, Torgon, and Champéry. Both areas are French-speaking, so how can you tell whether you’re in France or Switzerland? Well, the resort claims the accent of the lift staff varies, but frankly my French is too poor to be able to distinguish. The resort is absolutely huge and people have been known to get lost and end up in the wrong country at the end of their day. Better pack both currencies, just in case!

Via Lattea, which means ‘Milky Way’ in Italian, is the 5th largest ski area in the world with 70 ski lifts and 250 miles (400km) of groomed runs in total. It is situated in the Piedmont region on the French-Italian border, 90 minutes from Turin airport or 2.5 hours from Milan Malpensa airport, and combines the Italian ski areas of Claviere, Sansicario, Sauze d’Oulx, Pragelato, and Sestriere with the French resort Montgenévre. The ski area was host to the on-mountain events during the Turin Winter Olympics in 2006 and host to FIS World Cup events every year. The highest elevation is Monte Motta at 9,262 ft (2,823m).

The French-Italian border resort of Espace San Bernardo is located in the Aosta Valley, Italy, about 2 hours and 15 minutes south from the Geneva airport in Switzerland. It consists of La Thuile in Italy and La Rosière in France which combined offer a ski area of over 7,400 acres. The resort extends from 3,973ft (1,200m) to 9,186ft (2,800m) so offers plenty of vertical on more than 100 miles (160km) of groomed runs. The resort is serviced by one cable car and 37 lifts and has great training facilities for athletes, such as slalom areas, terrain parks, a boarder-cross slope, fun cross areas, a snowkite area, and kids’ games parks. The resort regularly hosts FIS World Cups and European Cups as well as Freeride events.

The Matterhorn, Switzerland’s most iconic mountain, is located in the Zermatt ski area, which is interconnected with the Cervinia ski area. Together these two ski areas form the Matterhorn Ski Paradise. Matterhorn Ski Paradise will host the first-ever cross-border World Cup event this October. The combined ski area stretches across 225 miles (360km) of pistes on 148 slopes and is serviced by 54 state-of-the-art lifts, gondolas, and funiculars. From spring 2023 a new gondola will be open called ‘Alpine Crossing’, which will provide an easy connection between Zermatt on the Swiss side and Cervinia on the Italian side. The first section of the project ‘Matterhorn Glacier Ride I’ was opened in 2018. Once the cable car connection is completed it will be possible for pedestrians to go between countries and not just skiers and boarders.

The ski area of Oberstdorf-Kleinwalsertal is situated in a mountainous region between Switzerland, Liechtenstein, Germany, and Austria. The town of Oberstdorf, Germany, is located in the state of Bavaria, about 2.5 hours southwest of Munich, close to the Austrian border. Most of the Kleinwalsertal ski area is located in Austria, but the entire region is only accessible by car from Germany. The ski area covers 81 miles (130km) of groomed runs serviced by 48 lifts. Oberstdorf is also known as a first-class cross-country destination and annually hosts the Nordic World Ski Championships. Oberstdorf is also known for its ski jumping facility and the region is a national training area for Nordic combined athletes from across the world. 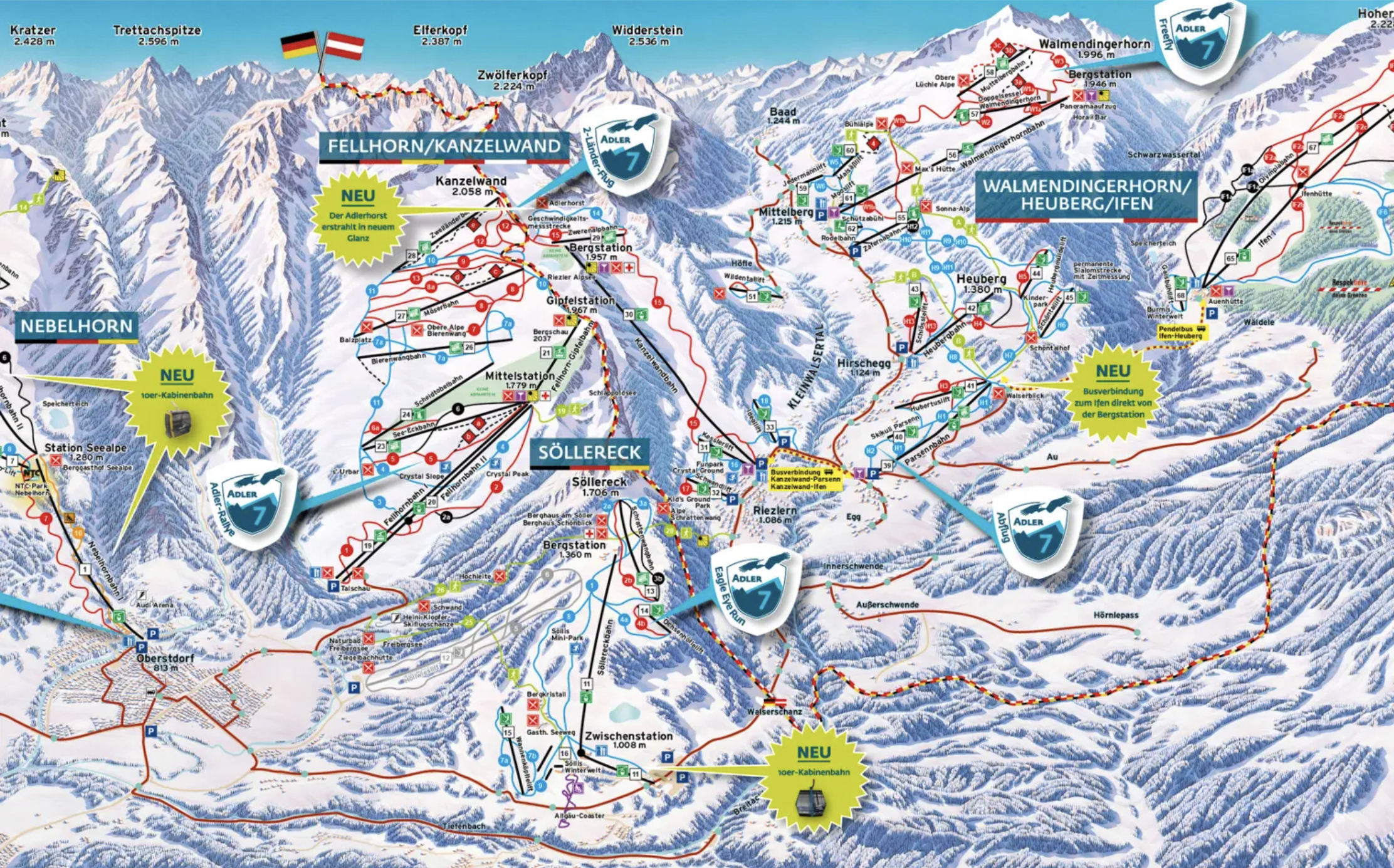 The resort of Kanin-Sella Nevea is located in a remote valley in the far northeastern end of Italy, about 2.5 hours north of Venice. Sella Nevea is in Italy and Kanin in the Julian mountain range of Slovenia. The ski area Kanin is the highest ski resort in Slovenia at 7,546 ft (2,300m). The village below, Bovec, is situated at only 1,490ft (454m) altitude. From the top of the cable car, you can see all the way to the Adriatic Sea. The combined ski resorts have 19 miles (30km) of groomed runs and three miles (5km) of sledding runs. While the ski resort is fairly small, the ‘Julian Ski Pass’ gives you access to a total of 163 miles (260km) of ski slopes across 14 ski resorts. So aside from Kanin-Sella Nevea, it gives you access to Kranjska Gora, Krvavec, Cerkno, and Soriška Planina in Slovenia, then Tarvisio, Zoncolan, Piancavallo, Forni di Sopra and Sauris in Italy, and 3-Laendereck, Innerkrems, and Goldeck in Austria. The area between Austria, Italy, and Slovenia has one of the highest snowfalls in Europe, making it popular with freeriders and heliskiers.

The tiny principality of Andorra is located in the Pyrenees mountain range between France and Spain and has a total of three ski resorts. In the east of this micro-state is the ski area Grandvalira, which consists of the interconnected resorts of Pas de la Casa, Grau Roig, Soldeu, El Tarter, Canillo, and Encamp in France. Grandvalira is the largest resort in the Pyrenees and has a total of 131 miles (210 km) of groomed runs along 139 different slopes. The resort is also very popular with off-piste skiers and heli skiers. The language spoken in Andorra is Catalan, but Spanish and French are also spoken frequently. English is understood everywhere, as tourism is a key industry in Andorra.