Every skier has a day during each season that sticks out in their mind more than others. One that is especially deep or the conditions especially right; a day where the stoke is unusually high, even for a pow day; the kind of day that gives you the mid-summer blues when you stop and reminisce. That day for me was December 28th, 2018.

The 28th of December was a day lost in time and space in the secretive mountains of Ruidoso, New Mexico. The cause? A polar vortex met a tropical storm coming in from the Gulf of California and resulted in one of the deadliest storms Lincoln County has seen in a long time.

Ruidoso, New Mexico is a sleepy, little, high-elevation town that hosts one of the southernmost ski areas in the United States. Its name is Ski Apache and it is owned and operated by the Mescalero Apache Tribe.

The ski area is on Indian reservation at the base of the regions’ highest peak, Sierra Blanca. The ski area is located 12 miles from the Shell gas station on the edge of town up a steep and windy road that brings you to its base at 9,600 feet. I had heard word that there was one hell of a storm headed towards us that very night, one that would leave several feet of new snow in town.

“That much snow expected IN TOWN?” I thought. I almost couldn’t believe my ears – I haven’t seen it dump that hard here since I was only a wee boy due to the fact that for the past several years Ski Apache (nicknamed “The patch” because on low snow years all you can ski is a single patch of snow) had been struggling with snowfall. An ailment of climate change, I suppose. Yet needless to say I was excited for the storm and eager to get up on my home mountain and ski some pow. I may have been excited but I sure as hell was not ready for what followed next. 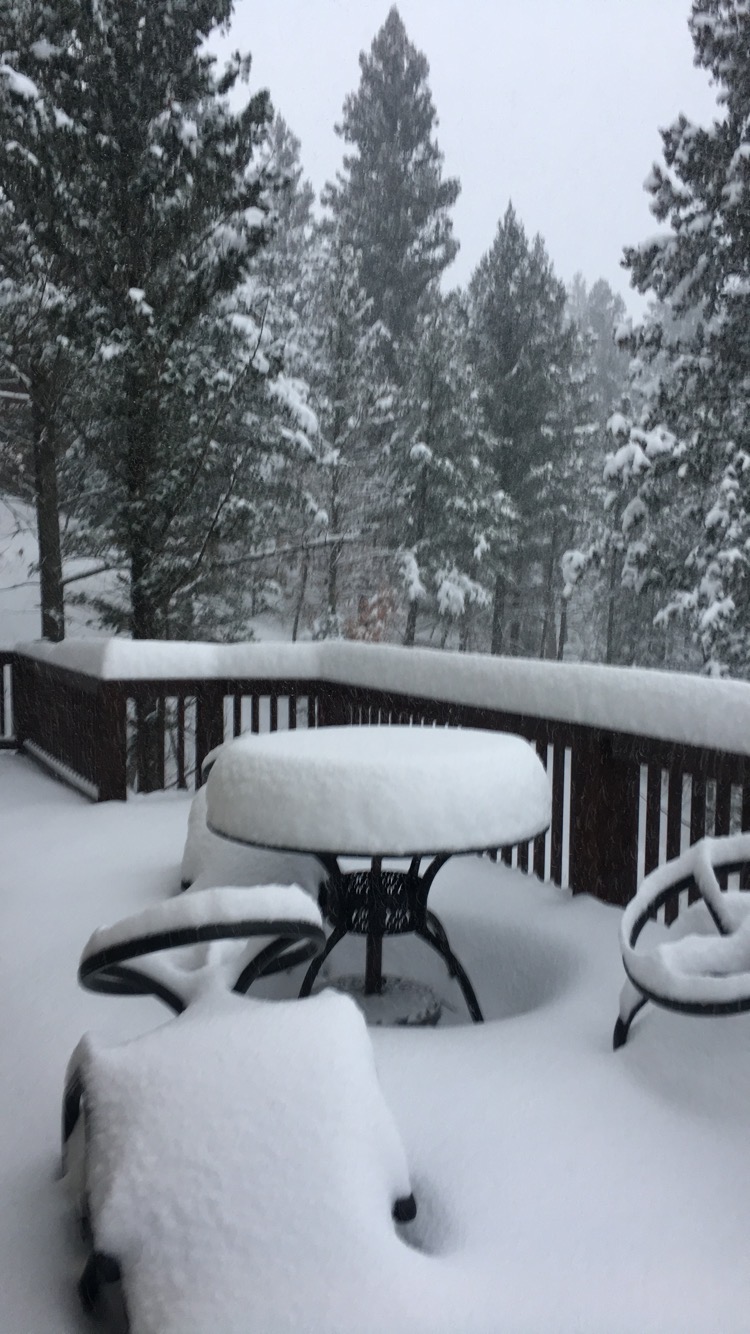 6:00 AM and I jump out of bed and run down the stairs to look out the window and see if the rumors had been true. Indeed, they were. It was as if Christmas had come twice this year. It had started snowing late the previous night and by 6:00 am there was already so much snow outside that I could barely make out the vehicles in the driveway. There was at least 2 feet of snow on the ground and it was dumping the fattest flakes I may have ever seen. Too excited to eat breakfast, I decide to get a head start and began digging a tunnel through the snow to my Jeep like a frenzied mole with only one mission: get to the ski area before they close the road to it.

The Ski Run Road had been plowed only minutes before I turned on to it, but it was dumping so hard that it had been completely re-covered with snow almost immediately. The plows just couldn’t keep up. As a result, the road was incredibly treacherous coming up.

I had to dig my Jeep out twice from the snowbank on the side of the road that was already several feet deep. Both times I immediately got out of my vehicle, grabbed my skis as a shovel, and began digging. There’s no way you can miss a storm like this at The ‘Patch.

By 8:30 am I was back in business and heading up the ski road at a snail’s pace, inching along trying not to lose traction and get stuck again. At this same time, directly behind me, there was a 7-car pile-up on the road and the authorities were forced to shut down the road. That meant that myself and everyone else who was in front of me on the road were the only ones who were going to be skiing up there the entire day, on this day of all days.

The land Ski Apache rests on has long thought to be sacred by the natives, fabled to be the home of a rouge female Apache leader by the name of “The White-painted Woman,” and her tribe of warriors. Believed to be a powerful spirit by the Apache, she certainly showed her colors on this day, blessing the mountains with a total of 45 inches of new snow within 24 hours! A record-breaking dump for the town of Ruidoso and its ski area.

When hell freezes over you ought to ski there too. The mountain was a waste-deep pool of the lightest and driest powder you could have asked for. The resort staff really pulled in clutch by opening the gondola to the top of the mountain for the first time that season. The snow up there was put-a-tear-in-your-eye, good.

Fresh lines and intense fear of drowning from snow inhalation persisted for the entire day. Only 50 or so people were riding the mountain the entire day due to the road closure! It only seemed to snow harder and harder throughout the day and by the time I got back to my jeep I had to scrape off another foot of snow from my car.

Because it had not let up snowing at all during the day, the way back down to town proved to be even more treacherous than coming up. If I was not stuck in the snowbank myself, then I was helping someone that currently was. The few cars that had made it up in the morning were now banded together in an envoy of ski vehicles just trying to make it out of this snowy war zone in one piece.

When one car got stuck and blocked the road for the others, we all had to get out and help them get unstuck. Otherwise, we’d be trapped up there all night. At one point a big, several thousand-pound truck did a full-on 360-maneuver on the road, coming only 6 inches from wrecking into my Jeep as I watched it spin around my car in pure terror. It had taken our group of cars three hours to make it down the ski road that usually only takes 40 minutes on a clear day, the entire time it mindlessly nuking pow.

Now dark, I had made it home to find the driveway twice as deep as when I had left it. I paddled through it with what little energy I had remaining and crawled inside the cozy cabin to warm my bones by the fire and call it night.

These are the days that make other days not as good – the days we as skiers live for. And for now, I live to tell the tale. Because for now, I wait. I wait for the White Painted Woman to return to these forgotten mountains, to show her face once again and wreak havoc on us poor souls who call this place home.

One thought on “A Tale of Ruidoso, New Mexico’s Historic Storm Last Season”