Echo Peak is just south of Fallen Leaf Lake on this interactive map.

With 3 feet of fresh pow accumulating in the past few days, followed by a day of clear skies and relatively cold temperatures, it seemed like prime time to venture out into the backcountry. The fact that avi danger was reported as ‘low’ for all elevations and aspects boosted our confidence. We chose Echo Peak as our playground for the day, with the intention to do multiple hikes around there. 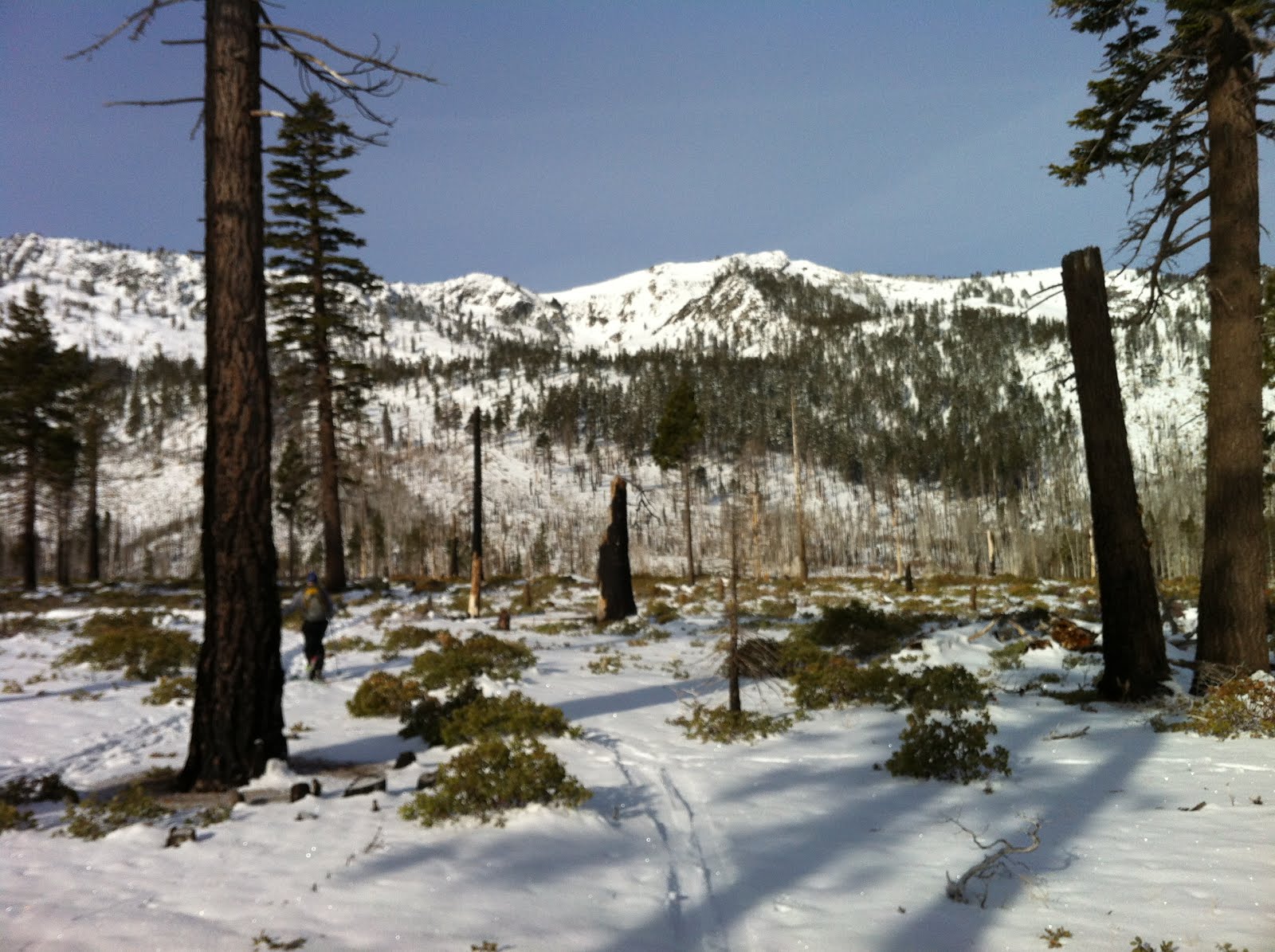 We left the car at 8:20AM and started skinning right away, which was a nice change. We didn’t even have to do any bushwhacking through the meadow. For our ascent, we picked a ridge line that was nicely covered in the trees. The snow was a bit crusty in the southerly aspects, but light and fluffy in the north-facing slopes. The new snow made for a good workout for Duane who was setting tracks ahead of me. We made it to the top of Echo Peak by 11AM. 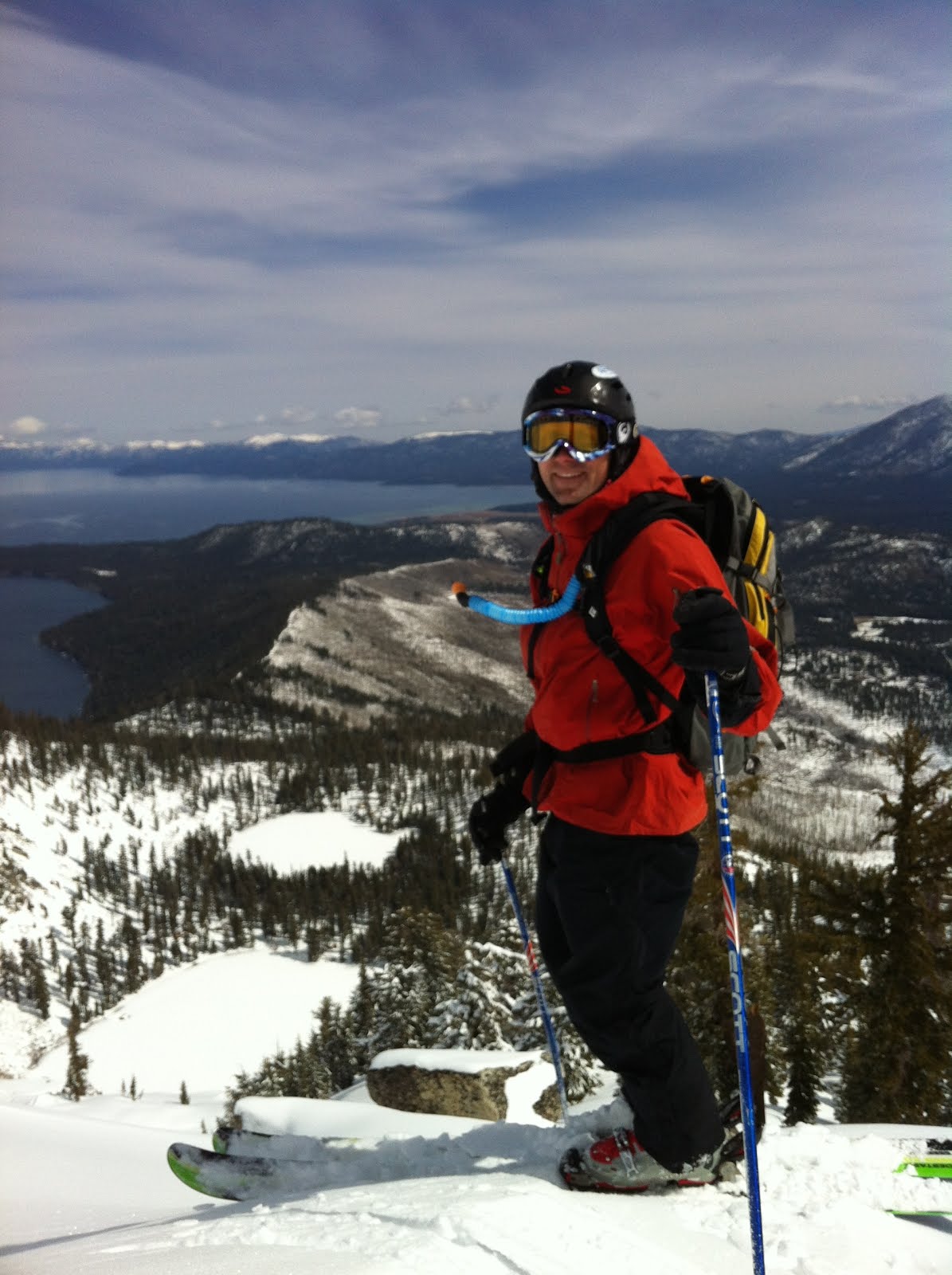 After a short break, we started skiing the NW aspect of the same ridge we ascended from all the way down to lower Angora Lake. The snow conditions were optimal: light yet perfectly stable. Aside from some sloughing from time to time, we didn’t experience any signs of snow instability. We still chose to stay clear of cornices, which looked massive along the top ridge. 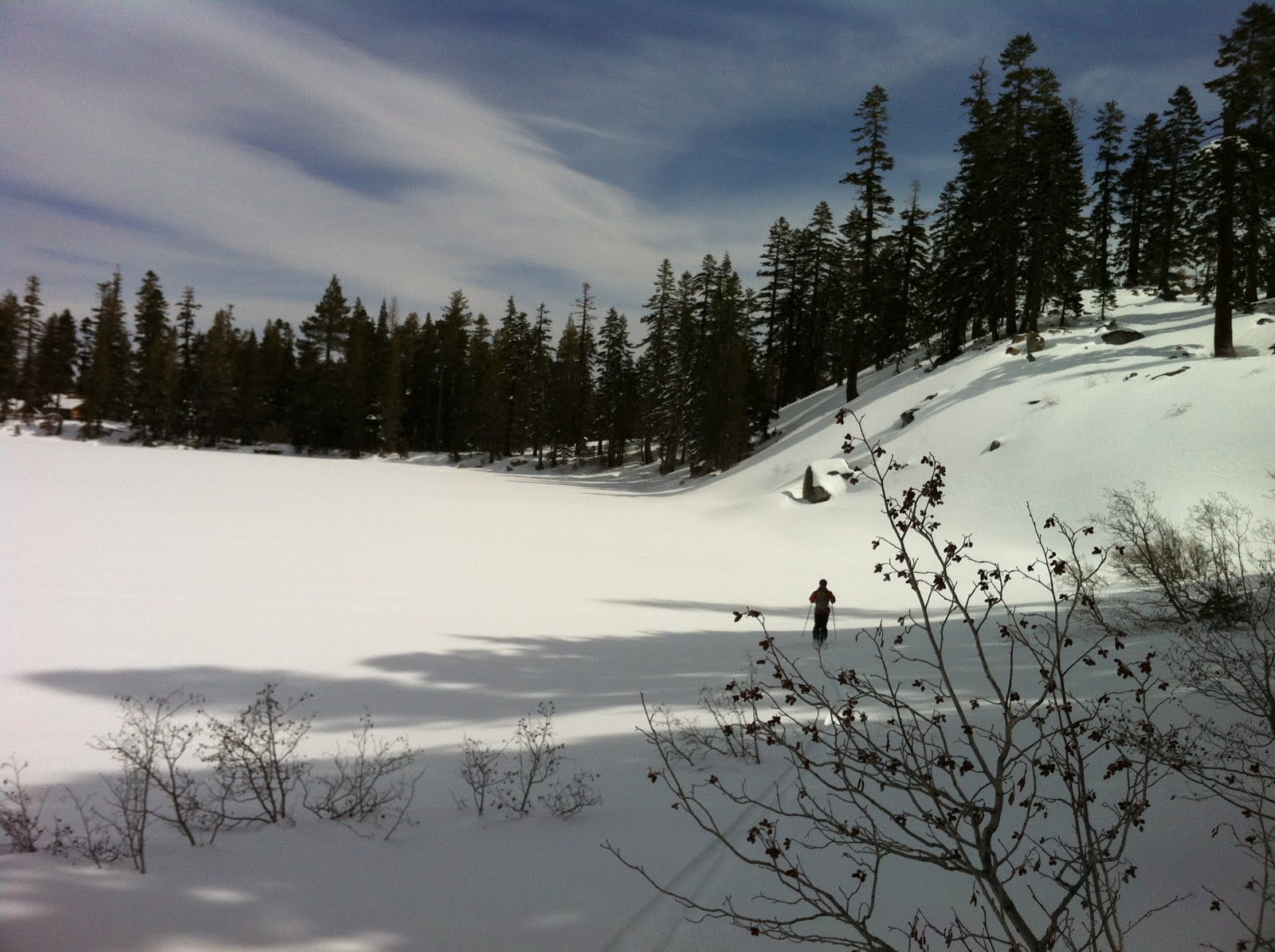 Walking on thin ice? Ending our first lap on one of the Angora lakes

After another short break, we put the skins back on and started our second ascent of the day at 11:45AM. With the exception of the lower fourth of the way for which we had to set tracks again, the rest was a piece of cake once we made our way back to our skin tracks from the previous lap. By this time the snow had already started to feel wet and heavy and we were releasing sun balls left and right. We could even “hear” it getting warmer, with the pine trees shedding their load and the icicles melting. I was also experiencing snow clumping under my skins, making it a bit more challenging to hike. 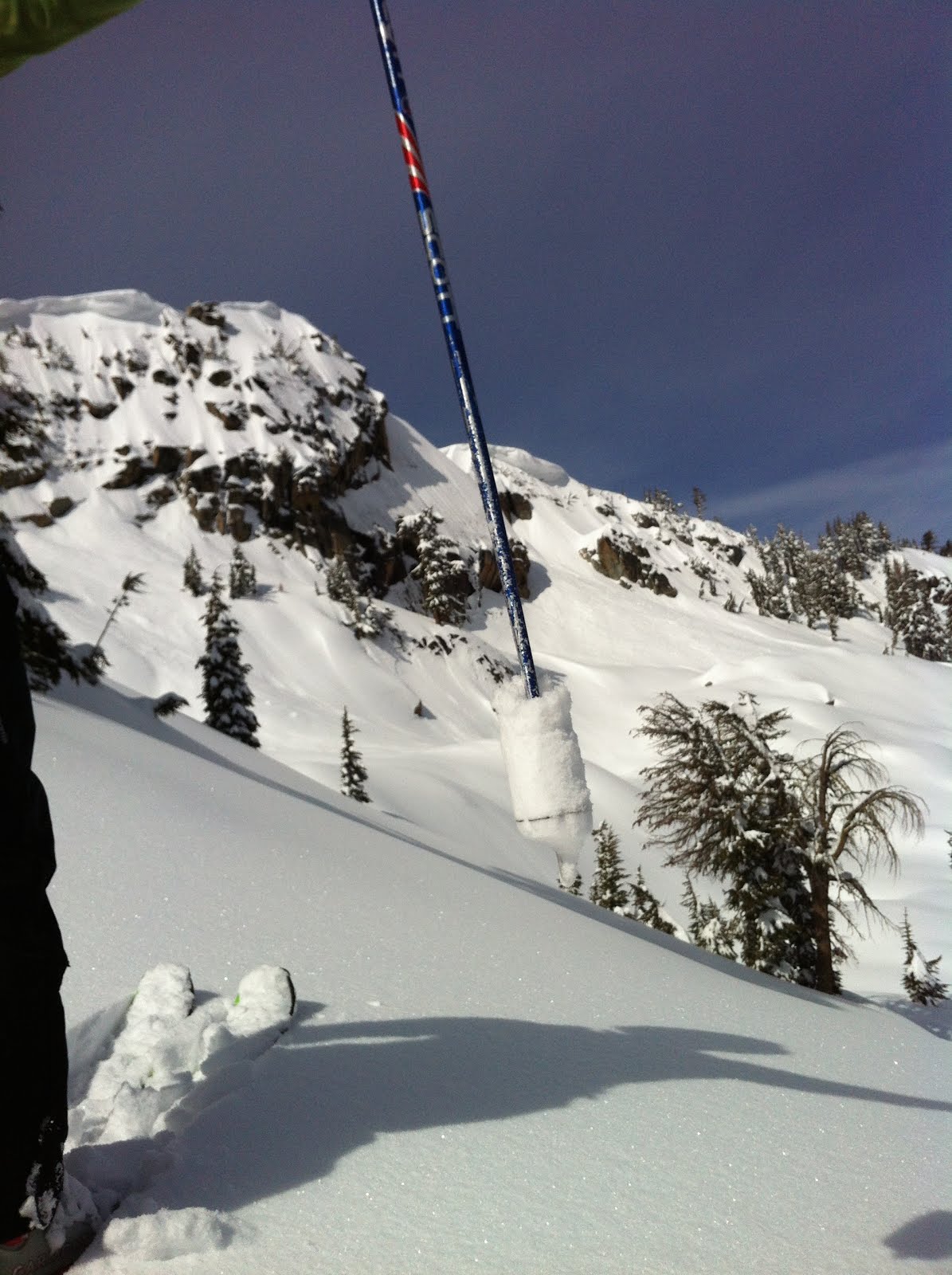 Signs of warming: snow clumping to our equipment

At 12:45PM we summited for the second time. The winds had already picked up and we could see a weather system rolling in from the South West. We took cover between two cliffs and devoured our lunch. This time we went for a less conservative route down, skiing a chute on skier’s left of the peak. The snow was still light and fluffy in the chute, which was well covered in the shade. But everything else was already baked in the sun. 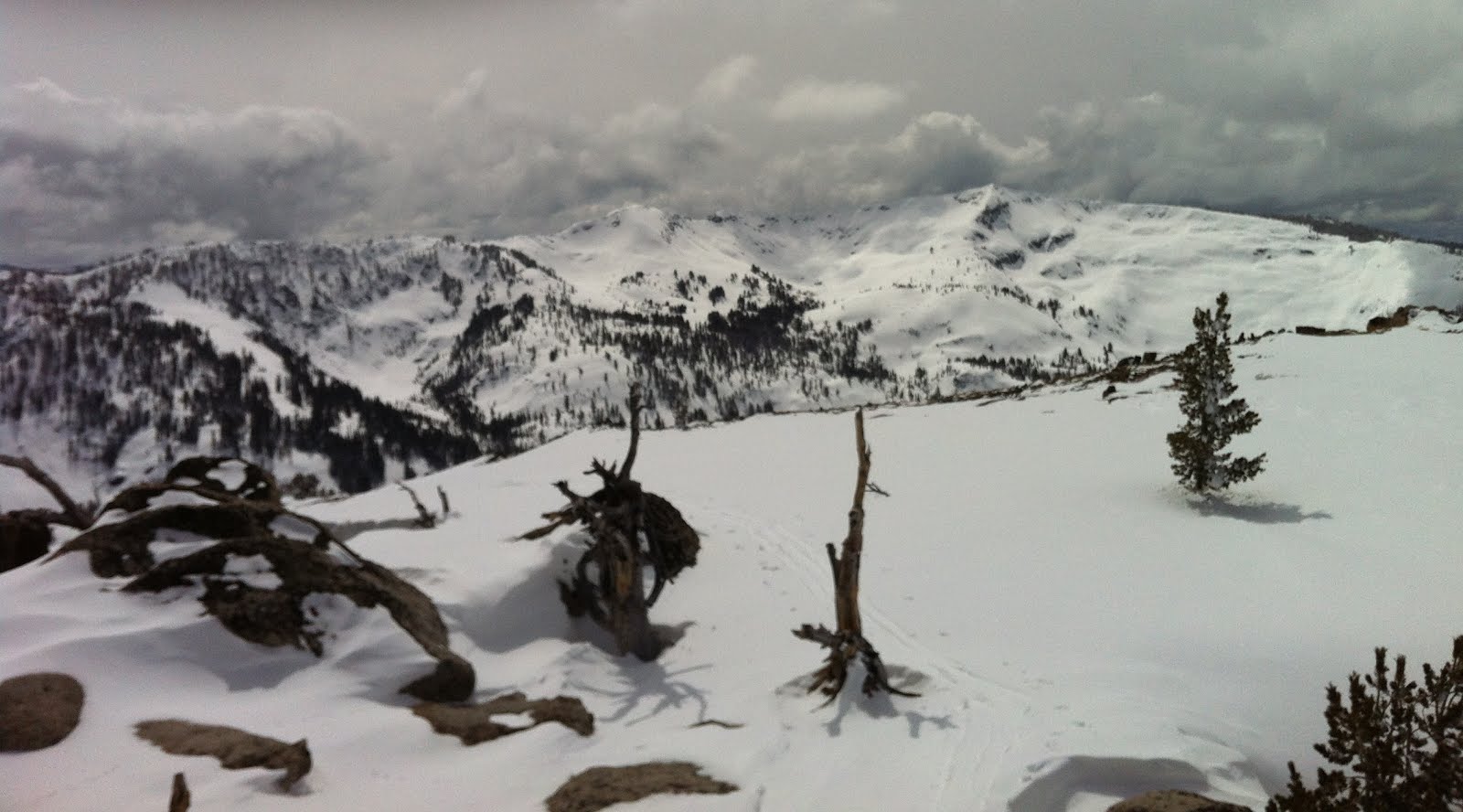 For our third lap, we left Angora Lake at 2:40PM and were in no particular rush to reach the summit. We took our times skinning through the woods, enjoying the spectacular views of Lake Tahoe, Fallen Leaf Lake as well as the frozen Angora Lakes down below, which were starting to disappear behind low hanging clouds. At some point during our third ascent it started snowing. And by the time we reached the summit again, this time at 4:20PM, the snow had given way to hail. 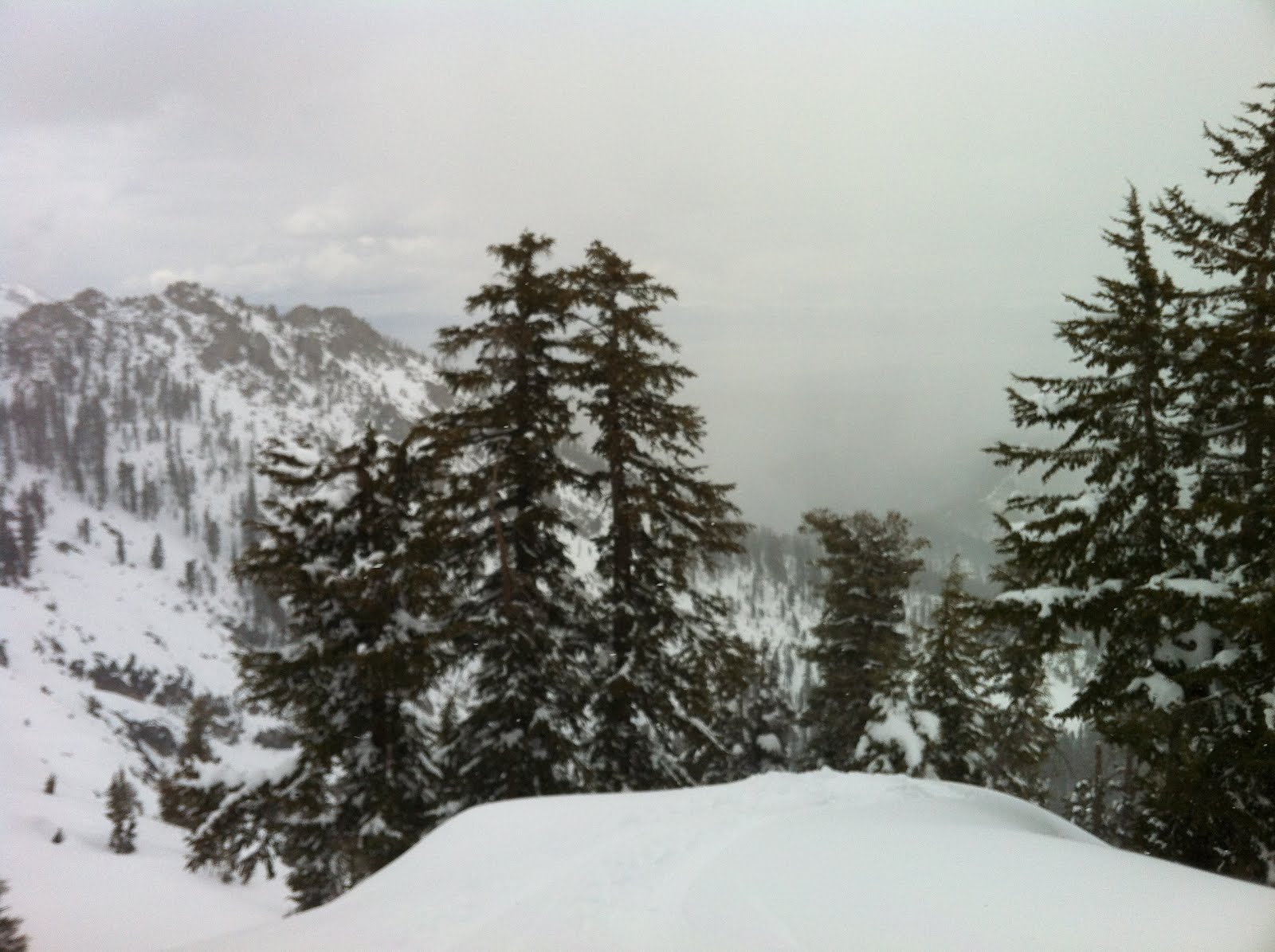 We had been eying a couloir to skier’s right of the summit all day long during our ascents, saving it for our last run of the day. It was one of the few chutes over on that side with a clean entrance, allowing us to avoid dropping off gnarly cornices which spelled avalanche hazard. The snow was still very nice, deep and fluffy in the chute, but it immediately turned into wet slush covered with a layer of crust afterwards. This was obviously the result of the combination of sun triggered melting around noon followed by freezing due to the temperature drop associated with the time of the day as well as the storm that came in the afternoon. 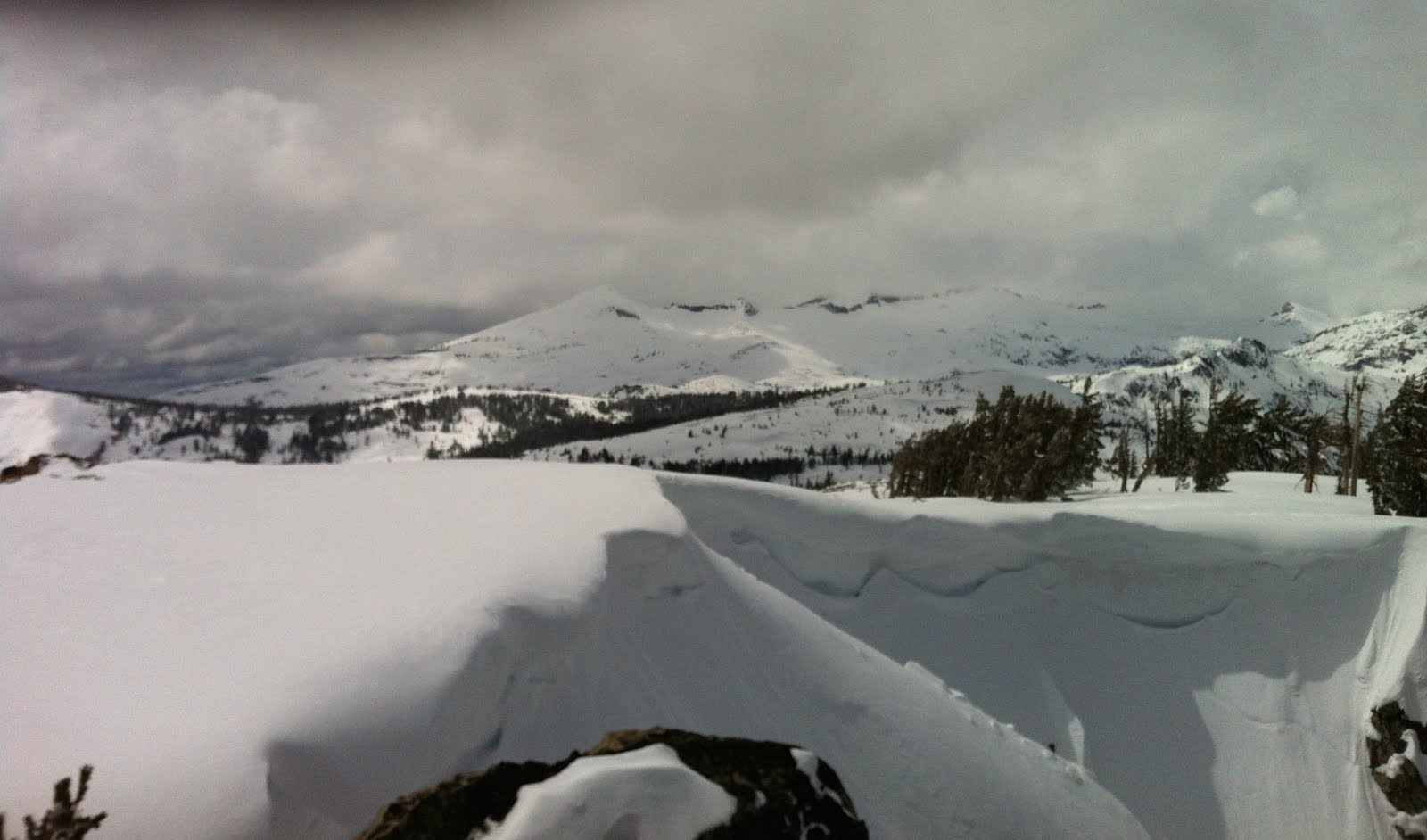 We decided to steer clear of these massive cornices

We were able to ski all the way down to the meadow, at which point we had to put the skins back on our skis one last time for one final push to the car. We reached the car at 5:30PM. Long day, but certainly worth it. 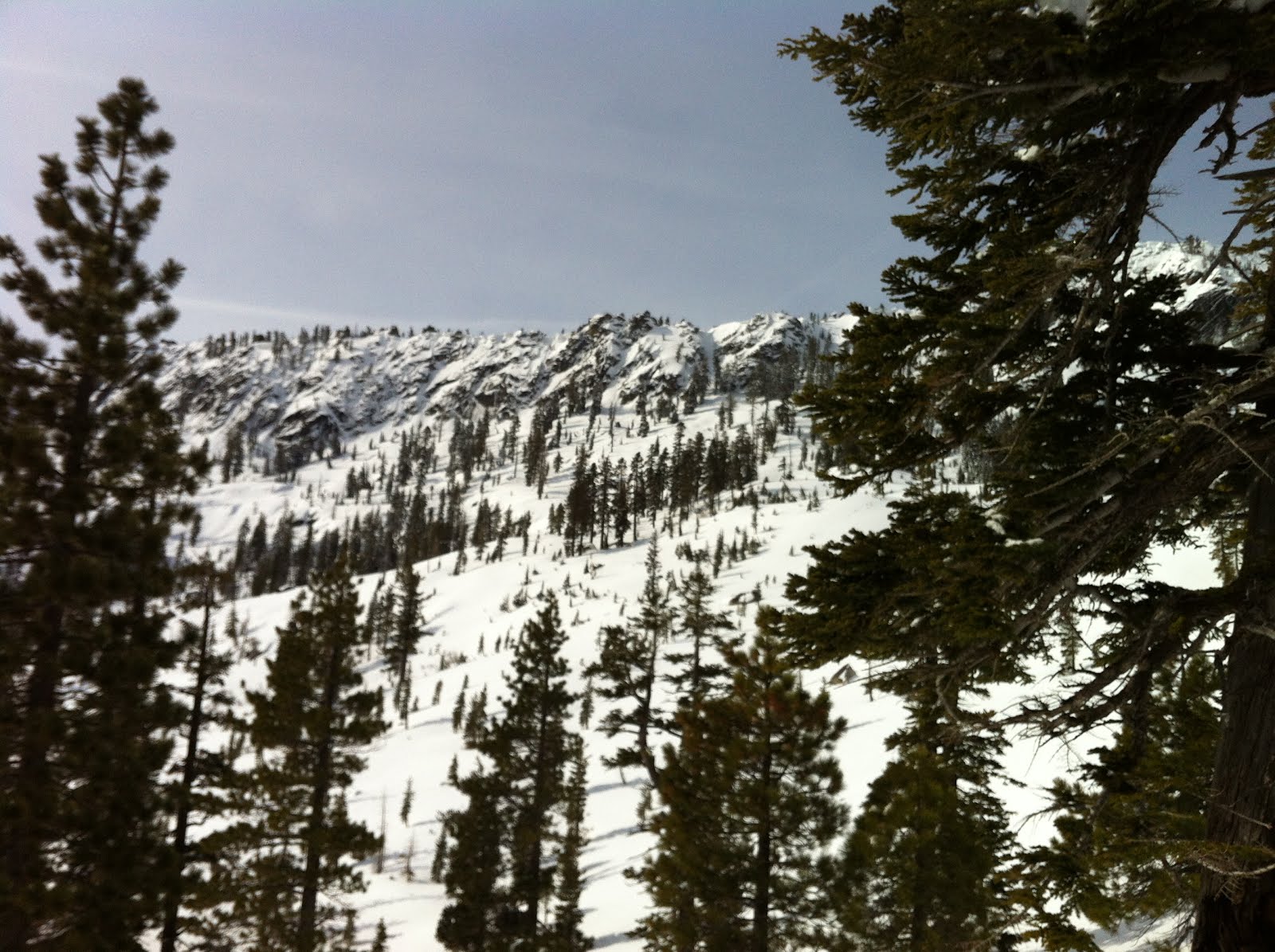 Contemplating all the different possibilities on our way up 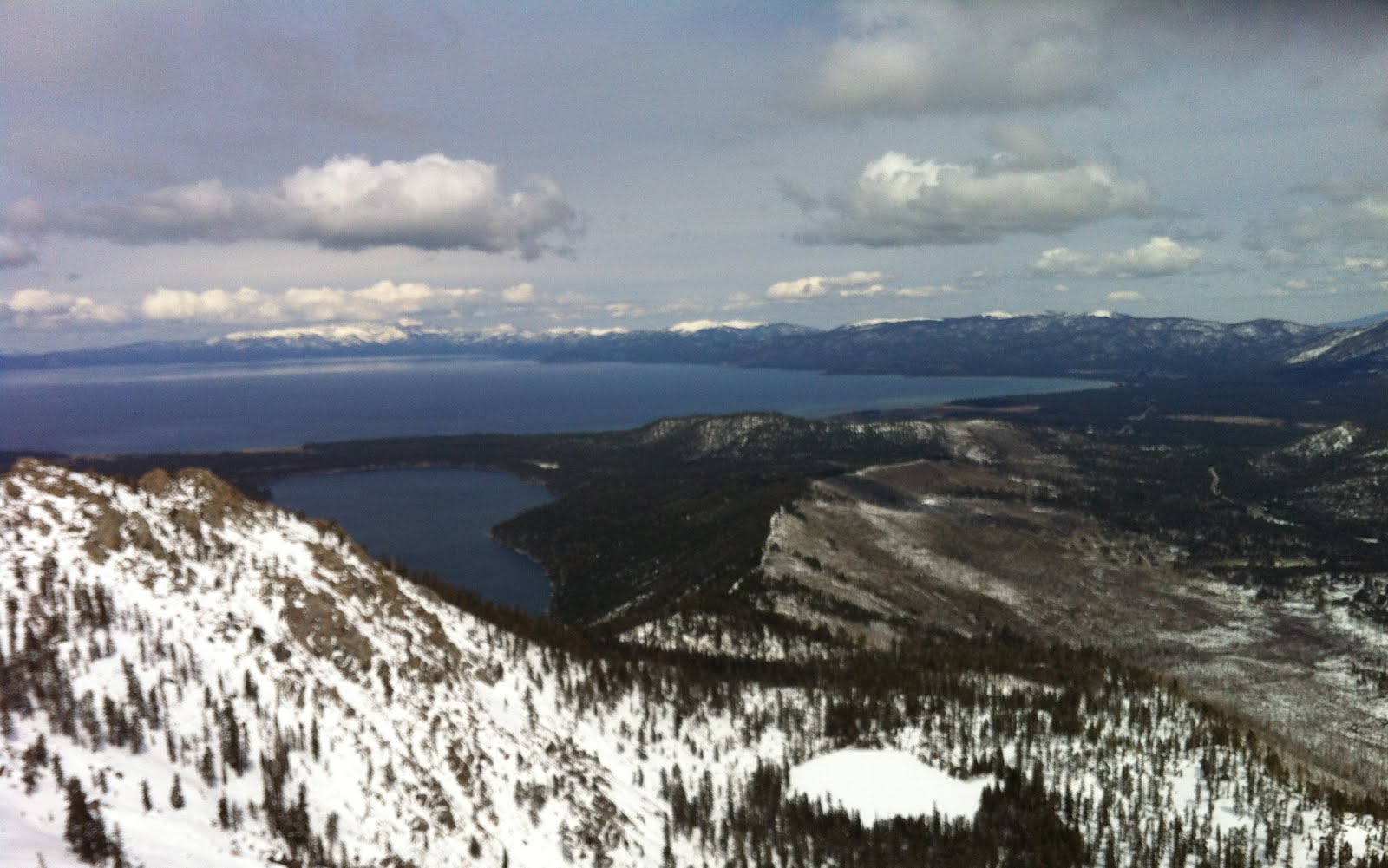 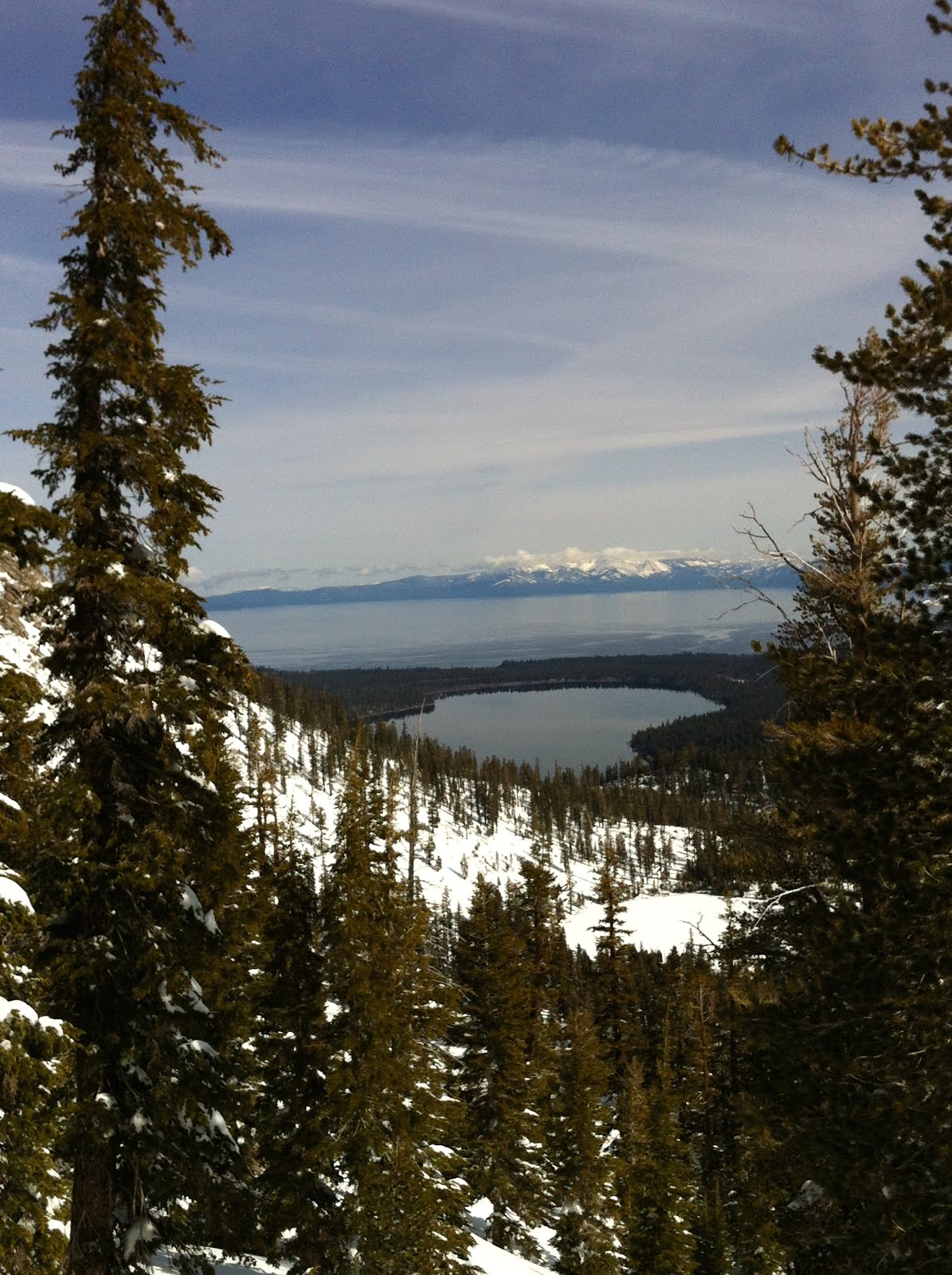 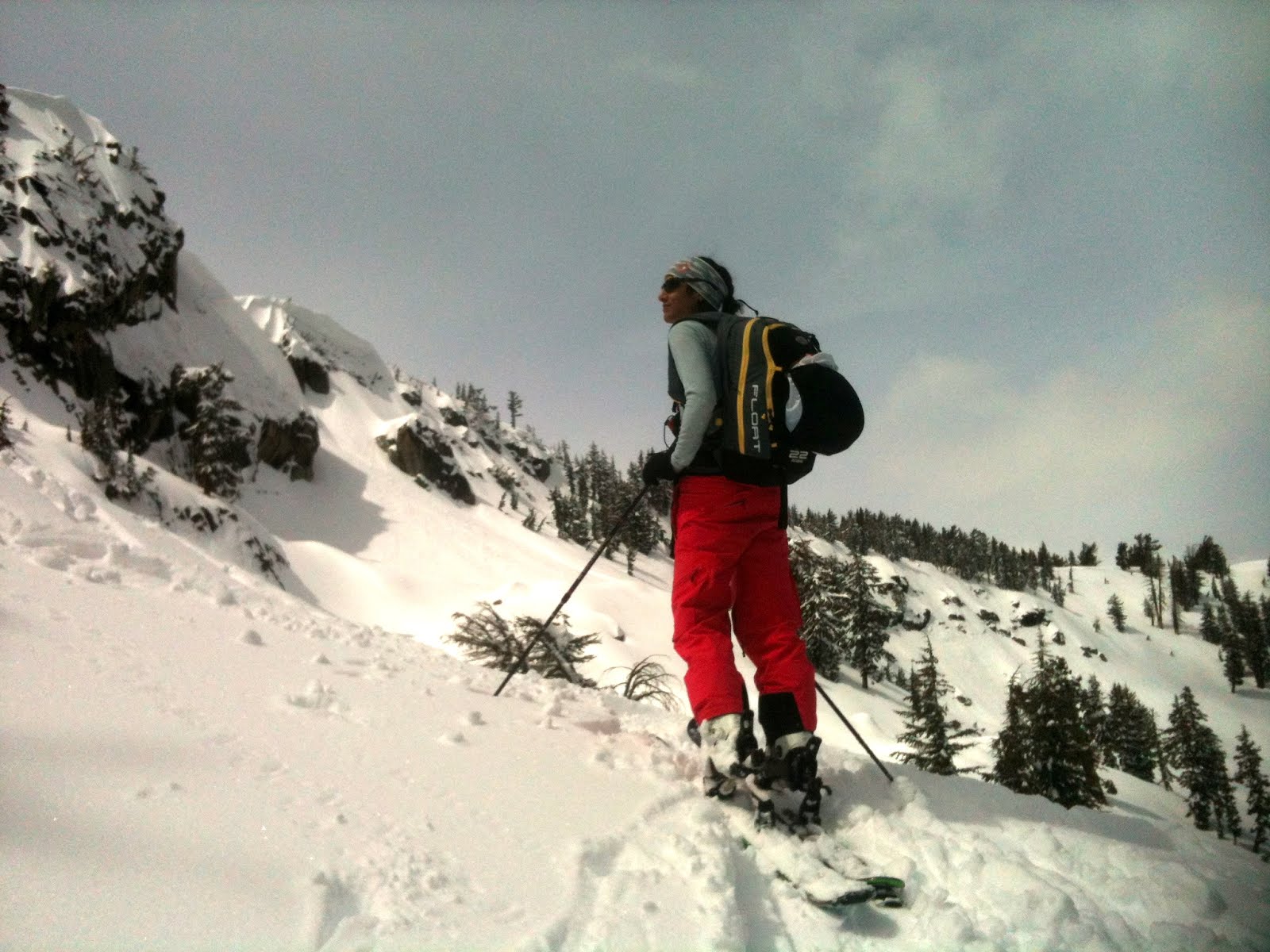 Scoping a chute on our way up for a second lap; photo: Duane Kubischta 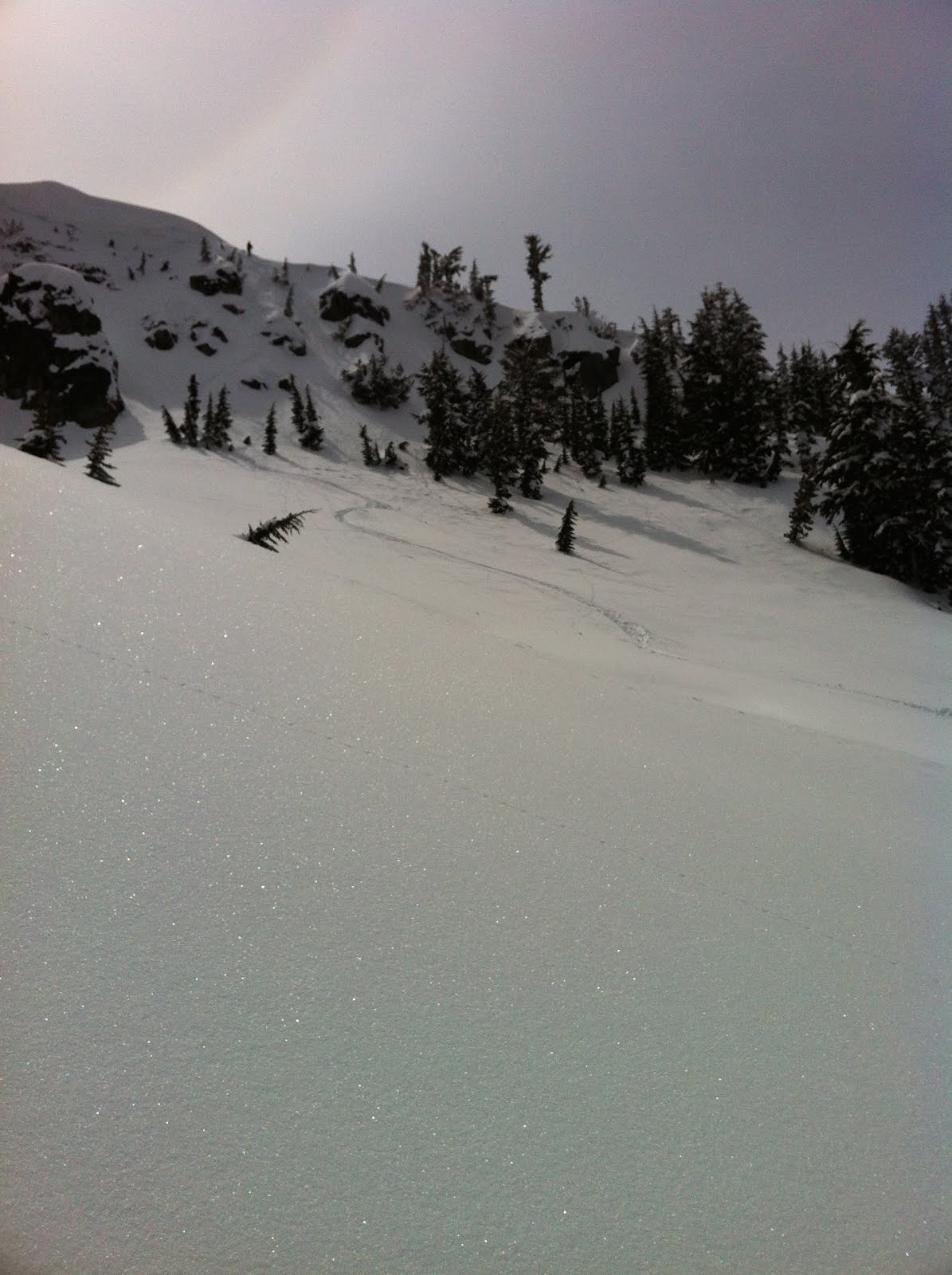 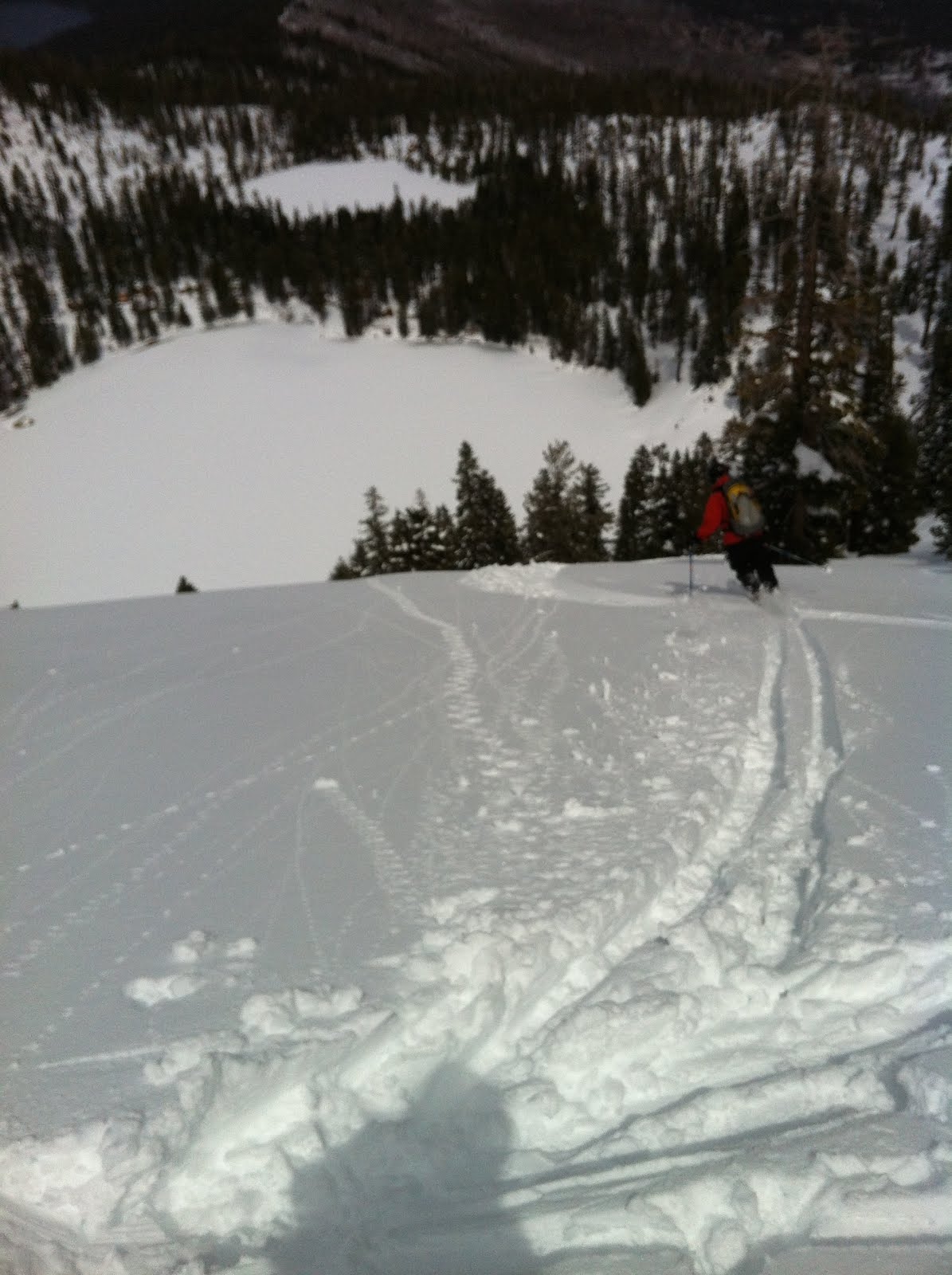 Duane skiing down towards Angora Lakes 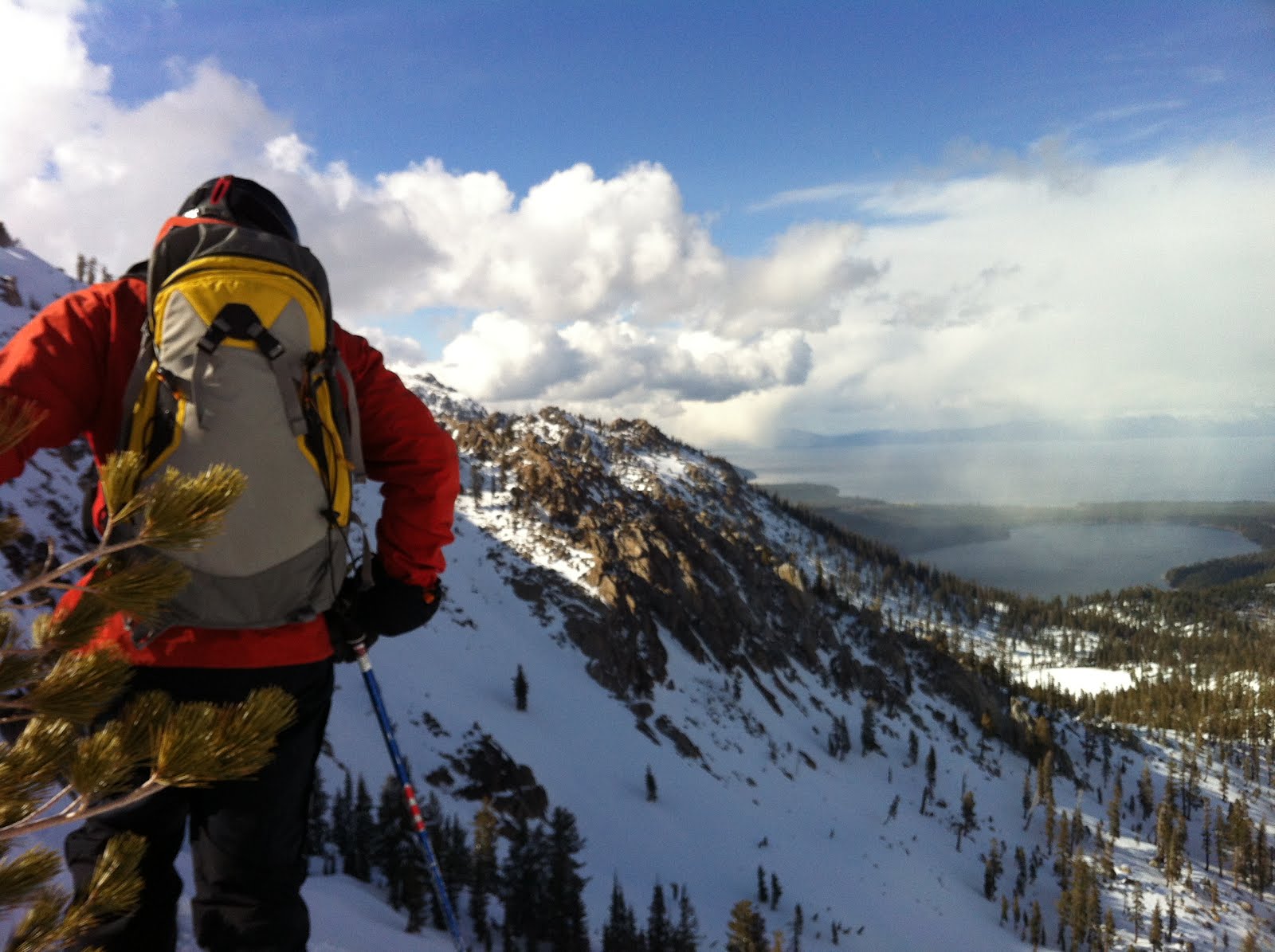 Duane scoping his line, with Lake Tahoe, Fallen Leaf Lake and a frozen Angora Lake in the background 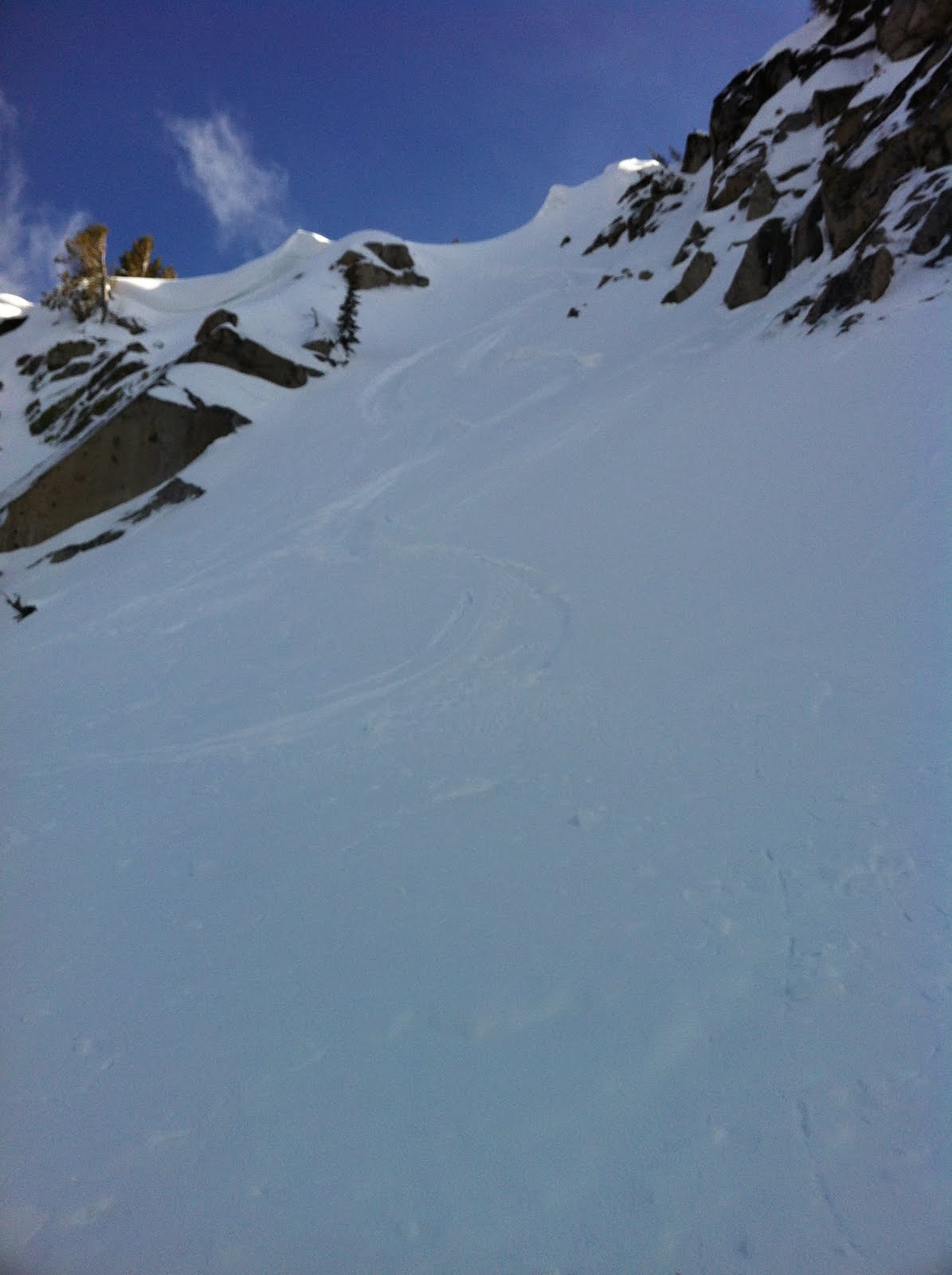 Our tracks in the last chute of the day 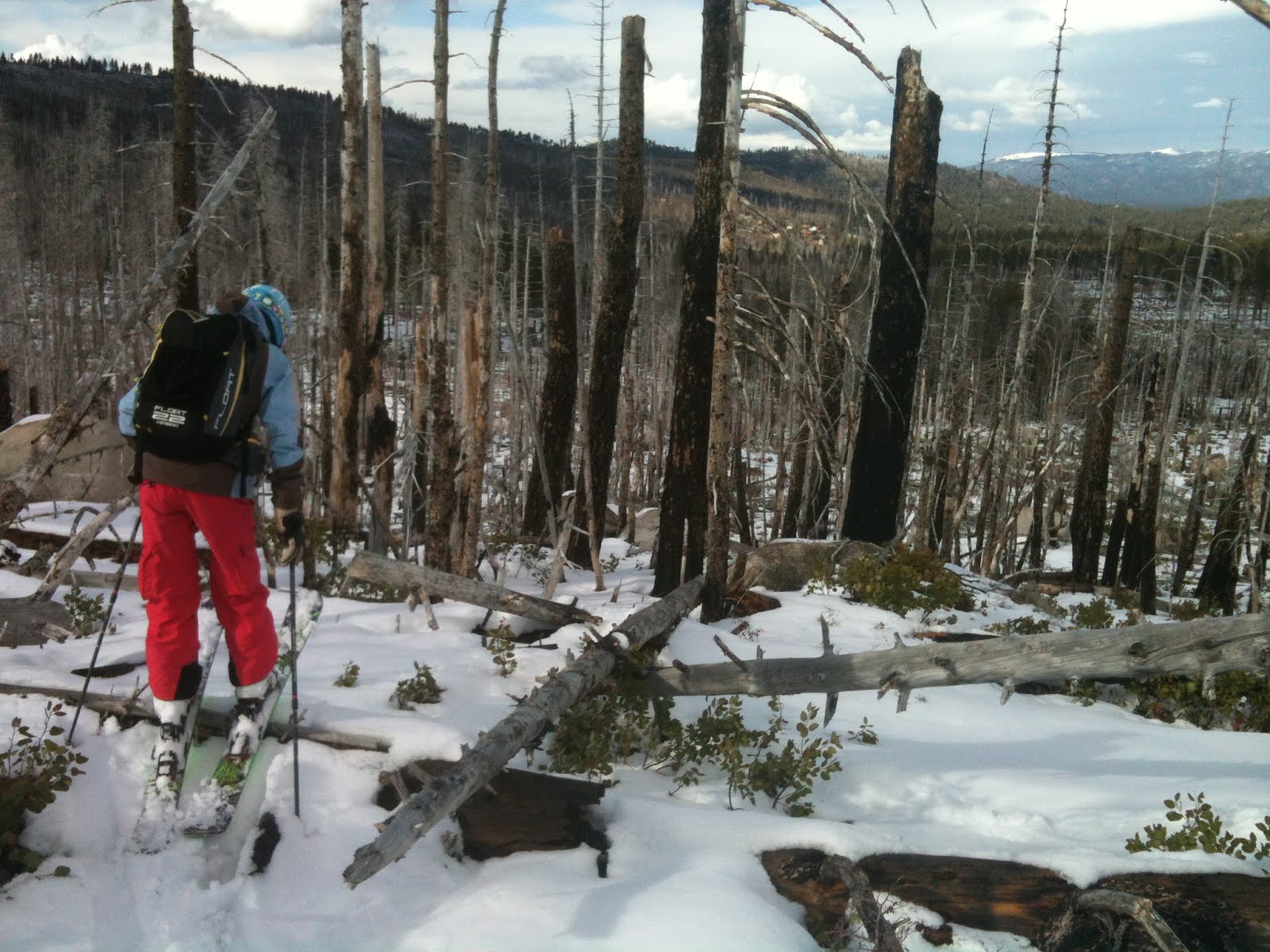 Finding my way back to the car through dead trees; photo: Duane Kubischta 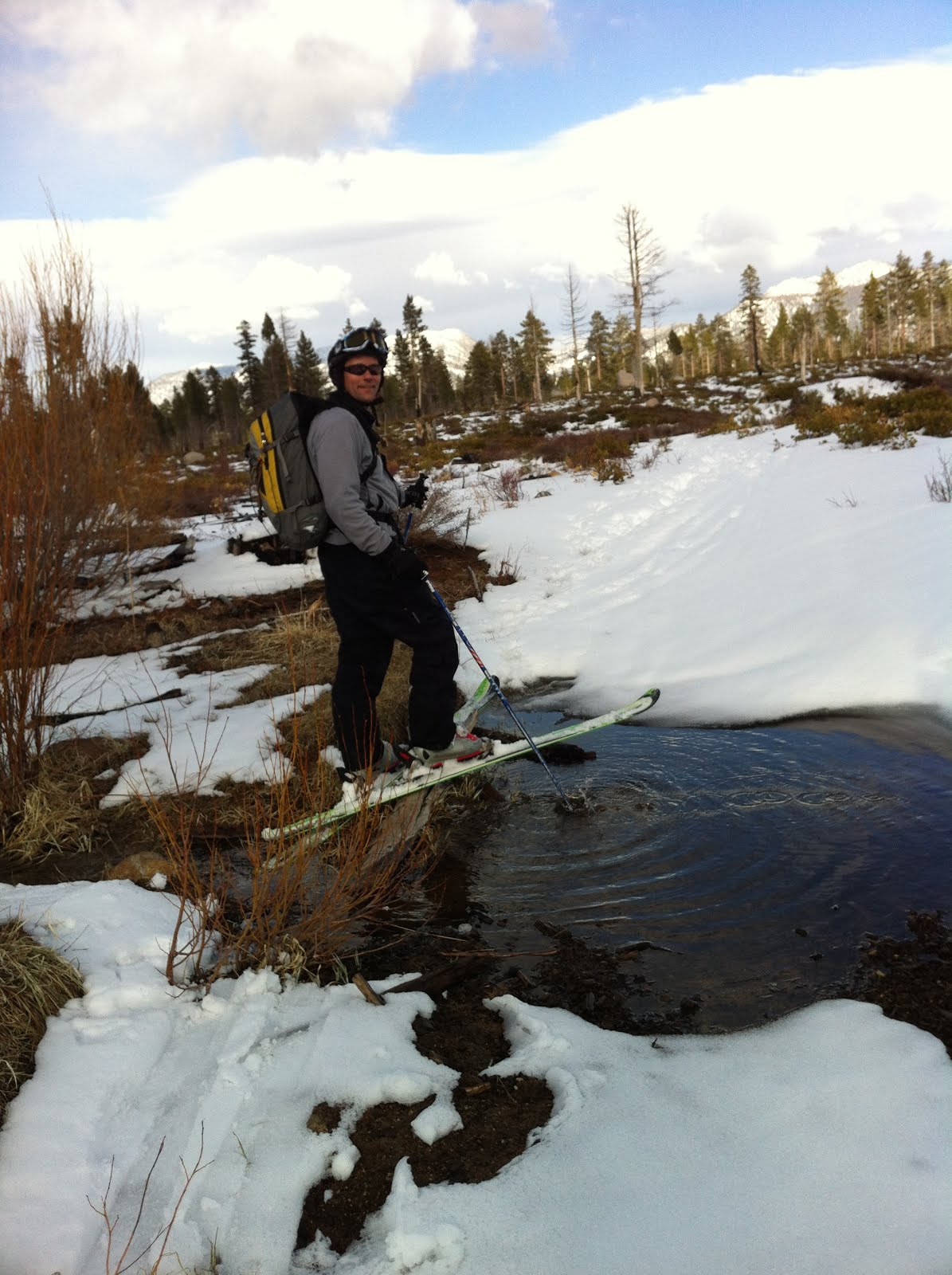 Duane ski-crossing over a creek