Dedicated skiers or riders seeking late-season turns should look no further than the Cascade Range, beginning with Lassen Peak in Northern California and extending north to Mt. Baker, Washington. My wife and I are part of the Turns All Year (TAY) tribe and in the last weekend in June 2020, we called an audible on Mt. Shasta (due to 55-85 mph winds) and headed to Lassen Volcanic National Park to ski Lassen Peak, the southernmost volcano in the Cascade Range.

Lassen Peak [10,457 ft (3,187 m)] usually holds snow until June or July nearly every year. Lying just below the just the Lassen Peak Summit Trail is Helen Lake, the snowiest location in California. This area has been part of a late-season pilgrimage for me since my good friend Pete re-introduced me to the area in 2013; when the winters in California were far below average. The area is an ideal location for winter storms to arrive due to its location just North of the Sierra Range and the southern end of the Cascades. Storms coming in off the Pacific Ocean are funneled right towards one of the few active volcanoes in the Cascade Range. Lassen Peak last erupted in 1915, when the plug dome violently exploded, sending car-sized boulders you see on the drive in from ten miles away. The ash flume rose 30,000 feet into the air and the devastation in this hidden gem of a National Park is evident, as is the fertility that has been left as a result of that eruption.

Saturday night prior to our tour, we camped at the North Summit Lake Campground at Lassen National Park. There are two campgrounds (North and South) that are situated approximately halfway between the Northern entrance to the park and the Lassen Peak Summit Trailhead. We slept in the back of our car to stay out of the wind and I do not think I have ever slept that well before a tour. Given how distant this park is from most cities, the stars were as vivid as could be that night and I could not wait to get my first turns in more than a month.

Due to the moderate winds and temperatures that were nearly 20 degrees lower than the day before, we were actually able to sleep later than I would on most late June tours in California, arriving at the trailhead around 8 a.m. on Sunday morning. A few hikers were in the parking lot that morning and my wife and I were able to talk a couple of guys from Berkeley, who were on the fence about strapping their skis to their packs with only a few ribbons of snow left, into committing to the ski because it’s always more fun and easier than walking down. They were not disappointed…

There are various routes one can take to ascend Lassen Peak, which is one of the few still active volcanoes in the Cascade Range. On prior tours, when the road is closed beyond the Devastated Area, we start at the gate at the Devastated Area and hike through trees until reaching a ribbon of snow. At that point, you normally skin several thousand feet before usually boot packing the last few thousand feet to the summit. Since it was late June, most of the trail to the summit was snow-free besides 3-4 patches that were easy to navigate in ski boots. We were able to get up and down in a little over 3 hours, without trying to rush things at all. So if you read this far, I’ll tell you that parking at the Summit Trailhead once the road is fully open in late May or June is the quickest and easiest way to ski Lassen Peak. 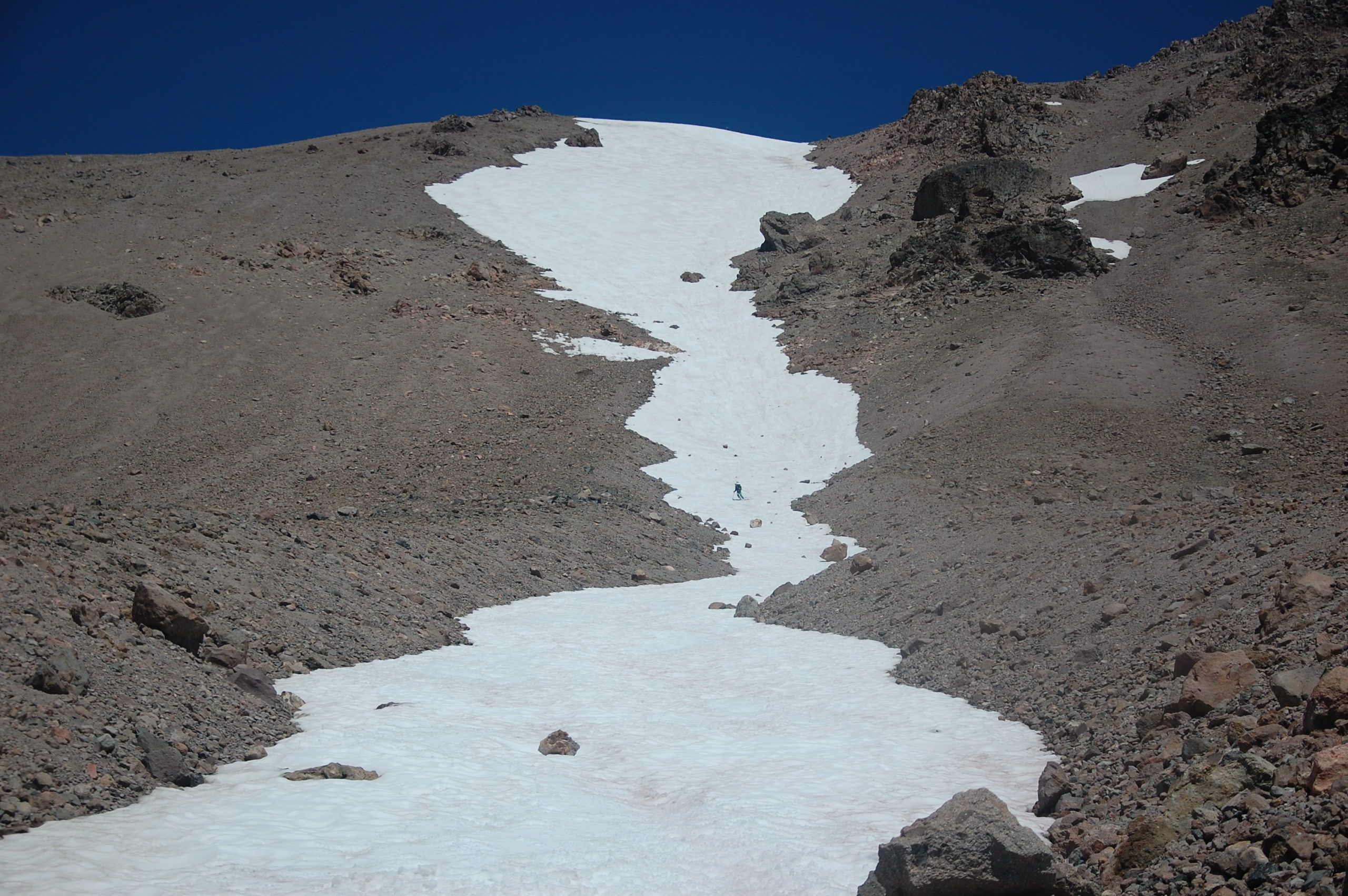 Most of the people we saw were casual hikers but we saw a few other skiers including one total badass female skier who looked to be from Alta, Utah based on a sticker I noticed on her gear. She blew by us on the trail with some Armada skis H-strapped to her pack but not before letting us know she was going to ski the epic NE aspect, which can be seen on the left of the mountain from the Manzanita Lake webcam. Apparently, she stashed her bike on the other side of the mountain with plans to ride back to her car, for an epic bike-ski shuttle.

With a consistent, moderate breeze that would gust every-so-often to keep us comfortably cool, we reached the summit and caught view of Mt. Shasta to the North, Reading Peak to the East and Lake Almanor to the South. We quickly decided to ski the most prominent ribbon of snow that funneled down from about 50 feet below the summit pinnacle and ended approximately 1000 feet below.

Hot corn is the best way I can describe the snow but I am certain these were the best late June turns I’ve had since I became a dedicated TAY skier. The line we took started out wide and started to significantly narrow about halfway down until we were making the tightest turns we could. My wife absolutely crushed the line and once we were at the bottom we watched the two skiers from Berkeley whom we had talked into bringing skis earlier that morning. They were happy they did…

After skiing 1000 feet of stable, soft corn after about a 2-hour hike from our car we walked across some scree to the next snowfield.  We took 8-10 turns before taking our skis off for the final time and it was only a few hundred feet to reunited with the trail. We hiked for less than a mile with our skis strapped in A-frames on our packs. Alyson and I joked how now that we are a bit older and wiser we are able to ski lines in half the time, with a lot less effort. In late June, that is exactly what we needed.