There is one truth is backcountry skiing; you better enjoy the up. You’re going to spend the majority of your day skiing uphill and a fraction of the time ripping turns and blasting pow on the way down. And if we’re being totally transparent, the skiing conditions can be a veritable mixed bag, from all time epic to challenging crusts that test the hardiest of skiers. 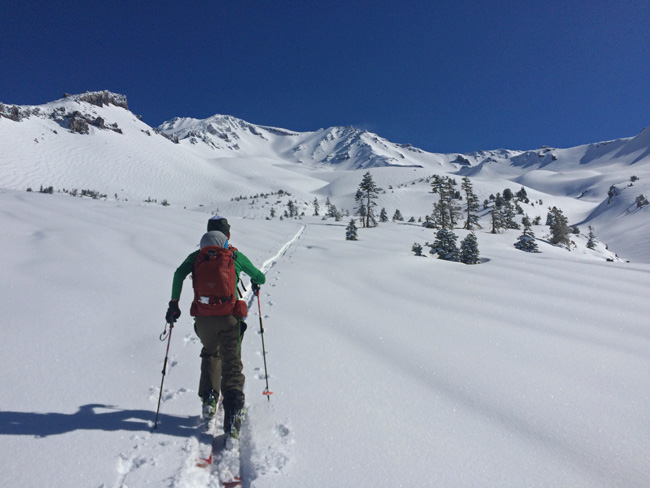 Such was our day. We had high hopes, 2 feet of new snow, the temps were staying cool, the sun was out and all of Northern California and Southern Oregon converged on Mt. Shasta; from Tahoe refugees to storm chasing van living dirtbags, the stoke was high at Bunny Flat. 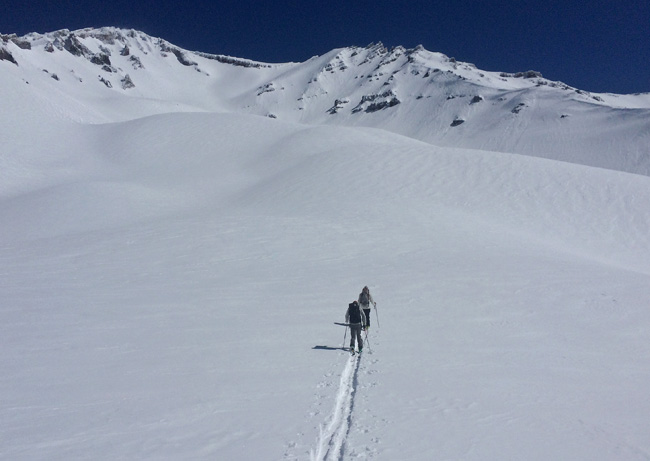 As you emerged from the low hanging clouds and fog in town, the mountain shone brilliantly fully coated in the most recent winter storm in spring. Upon closer inspection, it became obvious that the wind had it’s way with Mt. Shasta, and the bluebird skies we all love were going to wreak even more havoc on the fragile snow surface. 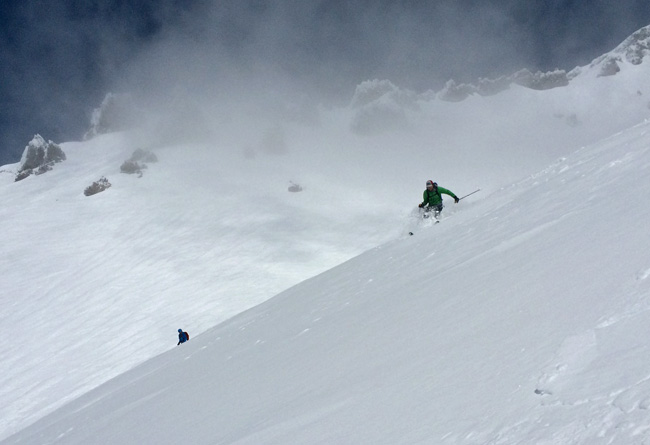 But that’s the beauty of backcountry skiing, it really doesn’t matter how good or bad the snow is, it’s all about being out with friends and putting yourself in beauty. The skin up was glorious, deep trail breaking with the anticipation of scoring 2 feet of new snow. The reality was slightly different; just as our crew of 6 transitioned at Lake Helen for the descent, the clouds moved in and bluebird skies went to 100′ of visibility. At one point I couldn’t determine if I was moving or stationary and we skied “leapfrogging” one another to try to get some perspective. A true comedy as soon as the skier took first position an immediate slow speed tip over ocurred. Skiing is difficult enough, it’s near impossible when you can’t determine the fall line.

There were some highlights though and there were sections of smooth snow less effected by the wind and warming temps. There were plenty of deep turns to be found and soft snow under your skis always feels good. I reckon the best skiing will be once this snow consolidates and we get back to spring corn conditions. The climbers will be most challenged by the recent storm and anyone thinking about a summit climb will be extremely challenged by the deep snow and potential avalanche hazard. I recommend giving the snow pack some time to adjust. 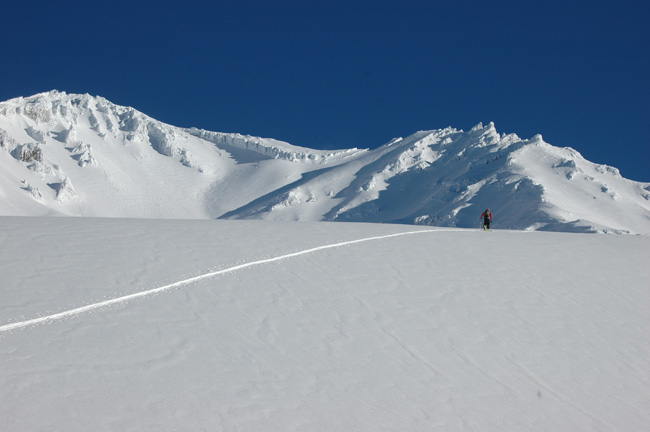 It looks like we may see a little more precip in the next week, nothing big but enough for a couple refreshers. The snowpack above 8,000′ is great, near normal depths and we expect a super climbing season. The latest storm helped the lower elevations but soon we’ll be on dry ground from the trailhead at 7,000′

Heads up while the snow transitions; today’s (4.9.15) warm temps may produce some instabilities. Check the avalanche advisory and use good route finding and track setting for the best conditions. We’ll see you in the Shasta BC!