8-14″ of snow expected for portions of the Cascades Monday as a shortwave trough moves through the area today.

12-18″ of snow expected around areas of the Great Lakes through Wednesday from a cold upper-level low.

Primarily a dry forecast for the rest of the US outside of those two regions.

A shortwave trough over the Pacific Northwest will bring 8-14″ of snow to portions of the Cascades today.

A deep upper-level low currently centered over the Ohio Valley will bring 12-18″ of snow to areas around the Great Lakes through Wednesday.

Light amounts are expected across the rest of the country through Wednesday.

Getting into the latter half of the week, the overall pattern indicates snow to continue over the northeast.

The rest of the country will stay relatively dry as a strong ridge of high pressure builds over the northern plains.

Global ensembles indicate a dry and warm pattern will persist over the majority of the country into the extended.

The exception will be over the northeast as ensembles want to keep storms moving through the region.

Best chance for snow will come tomorrow as a weak shortwave trough moves through the region, bringing 1-3″ of snow to mountain locations.

The rest of the week looks dry as a ridge of high pressure keeps the storm track well to our north.

1-3″ of snow possible through tomorrow as a weak shortwave trough moves through the state.

Unfortunately, nothing else is expected through the remainder of the week as a strong ridge of high pressure keeps storms out of the west.

California looks worse than Utah with basically no snowfall expected over the next seven days.

The Pacific Northwest looks to be one of two spots to see decent snowfall over the next week, with 8-14″ across portions of the Cascades through tomorrow.

Conditions look to be dry for the remainder of the week.

Resorts that look to see the most snow are Timberline Lodge, Crystal Mountain, Alpental, and Mt Baker.

The Northern Rockies will see relatively light snowfall amounts, with 2-4″ of snow expected across mountain locations through tomorrow.

Resorts that look to see the most snow are Jackson Hole, Targhee, Big Sky, Big Moutain, and Schweitzer. 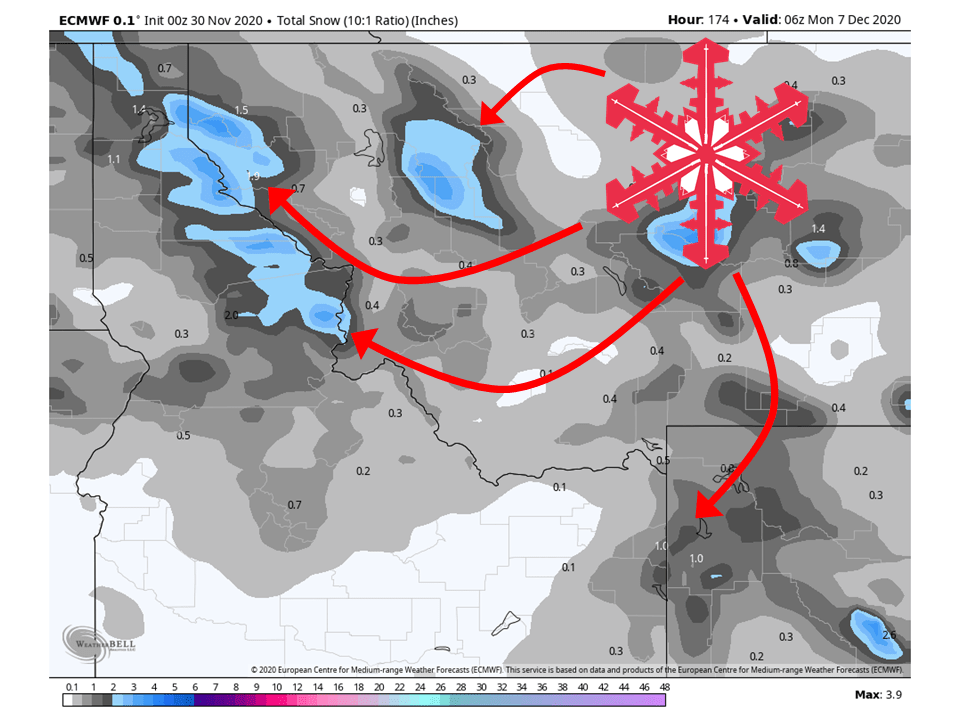 Colorado is in the same boat as the Northern Rockies, with light snowfall amounts around 2-6″.

Resorts that look to see the most snow are Aspen, Steamboat, Wolf Creek, and Winter Park.

The Southwest will stay mostly dry through the workweek, before getting some possible snowfall this weekend.

Snowfall amounts at this time look to be pretty light but that can change once we get closer to the weekend.

The Northeast looks to see the most snow of the next week, with 12-18″ of snow falling in spots south and east of the Great Lakes.

Resorts likely to see the most snow are Cockaigne, Kissing Bridge, and Holiday Valley.

There are some indications of snow over the central portion of the US but nowhere near ski resorts.

Global Ensembles show below-average precipitation for the majority of the country and above-average temperatures across the northern teir.